Each film will premiere on Art21.org every other Wednesday from January 24 through March 21, 2018. The films will simultaneously premiere on the Art21 YouTube channel (youtube.com/art21org). 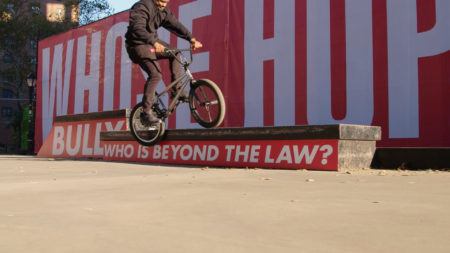 This winter film series demonstrates Art21’s ongoing commitment to digital-first video programming, underscoring the nonprofit organization’s position as the leading producer of films documenting the creative processes of today’s artists. “For over 20 years now, we have committed ourselves to storytelling about artists both established and emerging,” said Tina Kukielski, Art21 executive director and chief curator. “What better way to launch into our 21st year than to look at our past, present, and future in a single gesture by once again working with an artist from our very first year on television, Barbara Kruger.”

New films premiering every other Wednesday through March 2018

Kicking off the winter programming is Art21’s first collaboration with Barbara Kruger since the 2001 inaugural season of the Peabody Award-winning Art in the Twenty-First Century television series. In this rare new interview, Kruger reflects on her development as an artist, tracing her roots back to working class Newark, New Jersey, then through joining Condé Nast as a designer—the role that would equip her with design fluencies employed throughout her career. The film is bookended by two of the artist’s most recent projects: a site-specific installation in a New York City skatepark commissioned by Performa and an immersive full-room-wrap at Sprüth Magers gallery in Berlin.

Explorations of friendship and collaboration run through the second film from Art21’s acclaimed New York Close Up series to feature artist Raúl de Nieves. Working in partnership with artist Colin Self, the film tracks the pair as they prepare for The Fool, a 2017 performance at The Kitchen in New York City.

Artist Doreen Garner makes her Art21 debut through a new film from the New York Close Up series. Shown preparing for her recent exhibition at Pioneer Works in Brooklyn, the artist explores the history of Dr. J. Marion Sims, the controversial figure canonized as “The Father of Modern Gynecology” despite the savage procedures he performed on enslaved women without anesthesia or consent.

Perceptions of space and time are challenged in a recent project by Abigail DeVille, as seen in the artist’s third feature from the New York Close Up series. Through exhaustive research and planning, the artist transforms Baltimore’s former Peale Museum into a venue for investigating the extensive and, in some cases, untold history of the first building in the Western Hemisphere to be built and designed as a museum.

Closing the winter series is a film from the Extended Play series featuring renowned artist Jack Whitten—the second artist to make an Art21 debut in 2018. Filmed in late 2017, months before his passing, the artist is shown at work in his Queens studio, contemplating the decades-long career that brought him from Alabama to New York City in the 1960s. The film also features a recent body of work by the artist shown at a solo gallery exhibition at Hauser & Wirth in New York City.

Launched in 2008, Extended Play is the first and longest-running digital film series committed to documenting contemporary artists. Extended Play provides unparalleled access to the processes and lives of over 100 artists, including Julie Mehretu, Kara Walker, Sarah Sze, William Kentridge, Do Ho Suh, Cindy Sherman, Nancy Spero, Gabriel Orozco, Mike Kelley, and Carrie Mae Weems, among others. Together, the films in this ongoing series create a dynamic group portrait that illuminates what it means to be a working artist today.

Art21’s New York Close Up digital series is devoted to artists in the first decade of their professional career, living and working in New York City. Providing an intimate look at the next wave of artists, Art21 collaborates with artists to imagine new ways of telling stories about their creative processes, political and aesthetic philosophies, personal backgrounds, and community perspectives.

With the potential for each artist to be profiled in multiple complementary short films published over several years, the series offers a rare opportunity for viewers to experience today’s most intriguing young artists as their works, ideas, and lives evolve over time. Exploring themes of collaboration, improvisation, personal autobiography, history, and political responsibility, New York Close Up films are a snapshot of a distinct time and place, explored from the unique perspective of an emerging generation of artists.

New York Close Up is supported, in part, by The Lambent Foundation; public funds from the New York City Department of Cultural Affairs in partnership with the City Council; VIA Art Fund; and by individual contributors.