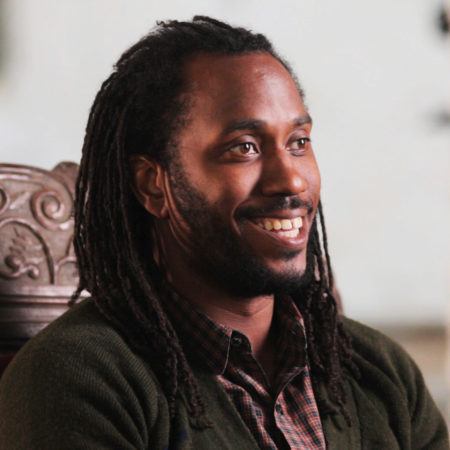 Rashid Johnson was born in 1977 in Chicago, Illinois, and lives and works in New York. Johnson, who got his start as a photographer, works across media—including video, sculpture, painting, and installation—using a wide variety of materials to address issues of African American identity and history.

Invested in the artistic practices of both conceptualism and abstraction, his influences include literary figures such as Ralph Ellison, Zora Neale Hurston, and Richard Wright as well as artists such as Norman Lewis, Sam Gilliam, and Alma Thomas. Johnson’s installations frequently include shea butter and black soap, materials that were present throughout his childhood and that carry a particular significance within Afrocentric communities.

For Johnson’s 2015 Anxious Men exhibition at the Drawing Center he took a more direct political approach than in the past, while returning to the portraiture that initiated his art practice.