Over our various days of filming, I don’t think I ever saw Nicholas Hlobo make a straight line. His knife was always meandering as he cut paper, canvas and leather into pieces that he would then stitch back together to form paintings and sculptures. This is emblematic of Hlobo’s approach to life — he likes to go off course in order to make discoveries.

“It’s important to go astray,” Hlobo says. In that spirit, I encourage you to take a short detour to Johannesburg and into Hlobo’s world by watching this new film. 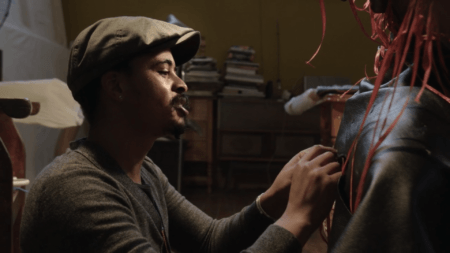 IMAGE: Liz Magor in her Vancouver studio. Production still from the Art21 Extended Play film, “Everyone Should Have a Studio.” © Art21, Inc. 2017.

Tuning into their energies to develop environments that foster peacefulness for creators and viewers alike, the artists in this playlist find serenity in silence and ask us to press pause so we can find it too.

Cast a sculpture of a paper bag with Liz Magor, sift wildflower pollen with Wolfgang Laib, and ride a stationary bike in “Chakra Juicer” with Mika Rottenberg & Jon Kessler in our “Slow Unfolding Moments” playlist. Azikiwe Mohammed is a Guy Who Makes Stuff has been highlighted as a Vimeo Staff Pick, marking the 7th Vimeo Staff Pick for Art21, and 6th for the New York Close Up digital series.

“I’m not very good at precious things. So I don’t use that word ‘artist’,” says Azikiwe Mohammed in the film. “I suppose I would self describe as a guy who makes stuff.” 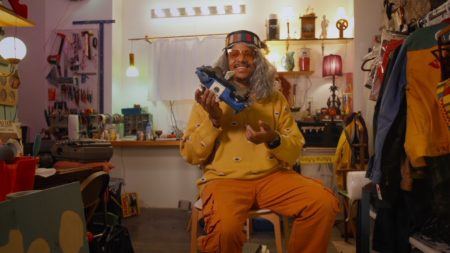 Azikiwe Mohammed is a Guy Who Makes Stuff IMAGE: Marcel Dzama, It all comes together again, 2020-2021. Courtesy of the artist and David Zwirner.

IMAGE: Marcel Dzama, It all comes together again, 2020-2021. Courtesy of the artist and David Zwirner Wangechi Mutu: Between the Earth and the Sky has been announced as Webby Honoree for Video – Documentary: Longform in the 26th annual Webby Awards.

Hailed as the “Internet’s highest honor” by The New York Times, The Webby Awards, presented by the International Academy of Digital Arts and Sciences, is the leading international awards organization honoring excellence on the Internet.

Art21 is currently seeking a new Associate Producer to join our Production department. Kameelah Janan Rasheed: The Edge of Legibility has been announced as an official selection for the 25th annual Full Frame Documentary Film Festival.

Support the go-to place to discover art and the creative process.

Your donation – in any amount – is vital and contributes directly to the production of films, programs, and education materials, ensuring that resources on contemporary art remain accessible for free on Art21.org.

Weekly Watchlist: See the World Through a New Lens