In her Clinton Hill, Brooklyn studio, Valeska Soares reflects on the transitional nature of her work, which isn’t confined to a single style or medium. “I don’t have a material fetish,” says the artist. “Whatever the concept, if the idea only can be expressed through a movie, a photograph, or a perfume, that’s what I use.”

Soares is filmed at work on her Doubleface series, in which the artist reverses nineteenth and twentieth century portraits of women, re-stretches them and paints the verso in palette limited to one or two colors. Finally, Soares cuts out a selection of the original oil painting and folds it over the newly monochromed canvas to reveal the sitter’s faces and hands in a test of identity within abstraction.

The artist also shares the impetus behind Epilogue, installed at the Chelsea gallery Alexander Gray Associates in 2017. Comprised of five antique tables covered in mismatched antique cups filled with wine and spirits, the work evokes the end of a rambling party and invites the viewer into the role of host; the installation catalysing an imagined narrative defined only by each viewer’s interpretation of the objects. “My work, it’s always living on this borderline,” Soares says of her work, “on this minute of transition between one state and the next.” Valeska Soares was born in Belo Horizonte, Brazil, in 1957. Her sculptures and installations utilize a wide range of materials—including reflective mirrors, antique books and furniture, chiseled marble, bottles of perfume—and draw on both her training in architecture and the tools of Minimalism and Conceptualism. Contrasting polished, industrial materials with more ephemeral ones, Soares’s work invites viewers to engage all five senses, evoking the poetic and elusive themes of desire, intimacy, language, loss, personal memory, and collective history.

“I don’t like tricks when it comes to materials. I need to feel that the work is true.” 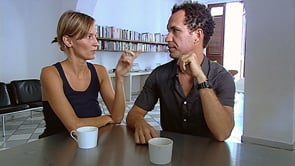