Filmed in 2013, Tim Hawkinson gives a tour of his sculpture exhibition at Pace Gallery in New York City. He provides insight into each artwork and discusses the variety of materials he used, such as resin and bronze casts of his body, pieces of his daughter’s old bicycle, and pine cones and palm fronds from his garden.

Hawkinson made some of the works over time with his daughter Clare, a Girl Scout Brownie. “She has kind of given me ideas,” he says. Hawkinson named each sculpture in the exhibition after a different Girl Scout cookie, alluding to Clare’s involvement in his creative process.

Art21 Exclusive is supported, in part, by by the New York City Department of Cultural Affairs in partnership with the City Council; 21c Museum Hotel, and by individual contributors. Tim Hawkinson is renowned for creating complex sculptural systems through surprisingly simple means. His installation, Überorgan—a stadium-size, fully automated bagpipe—was pieced together from bits of electrical hardware and several miles of inflated plastic sheeting. The source of inspiration for many of Hawkinson’s pieces has been the re-imagining of his own body, and what it means to make a self-portrait of this new or fictionalized body. In 1997, the artist created an exacting, two-inch-tall skeleton of a bird from his own fingernail parings; believable even at a close distance, this work reveals Hawkinson’s attention to detail as well as his obsession with life, death, and the passage of time.

“This body of work is relating more to my family, specifically my parents. I reflected a lot on family relationship and the embrace. So it has that kind of embrace where each figure is kind of placing its trust in the next generation.” 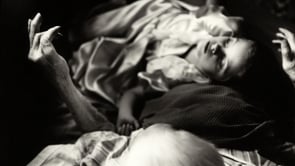 What are the similarities or differences between the processes of learning and inventing something? 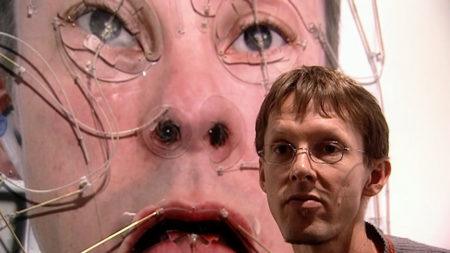 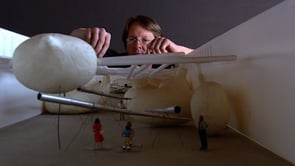 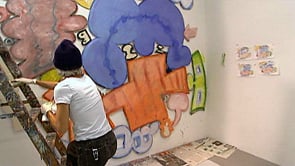 Season 2 of "Art in the Twenty-First Century"