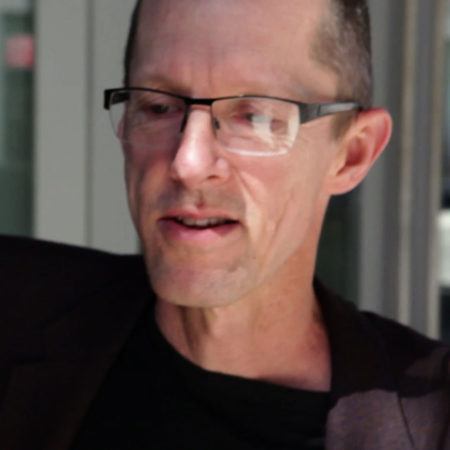 Tim Hawkinson was born in San Francisco, California, in 1960. A graduate of San Jose State University, he later earned his MFA at the University of California, Los Angeles, in 1989. Hawkinson is renowned for creating complex sculptural systems through surprisingly simple means. His installation, Überorgan—a stadium-size, fully automated bagpipe—was pieced together from bits of electrical hardware and several miles of inflated plastic sheeting.

Hawkinson’s fascination with music and notation can also be seen in Pentecost, a work in which the artist tuned cardboard tubes and assembled them in the shape of a giant tree. On this tree, the artist placed twelve life-size robotic replicas of himself, and programmed them to beat out religious hymns at humorously irregular intervals. The source of inspiration for many of Hawkinson’s pieces has been the re-imagining of his own body, and what it means to make a self-portrait of this new or fictionalized body. In 1997, the artist created an exacting, two-inch-tall skeleton of a bird from his own fingernail parings, and later made a feather and egg from his own hair; believable even at a close distance, these works reveal Hawkinson’s attention to detail as well as his obsession with life, death, and the passage of time.

Hawkinson has participated in numerous exhibitions in the United States and abroad, including the Venice Biennale (1999); Massachusetts Museum of Contemporary Art (2000); the Power Plant, Toronto (2000); the Whitney Biennial (2002); and the 2003 Corcoran Biennial, Washington, DC. Tim Hawkinson resides in Los Angeles with his wife.

Artist Tim Hawkinson discusses his 2002 installation Drip, his 2000 installation Emoter, and the similarities between the two.