Art in the Twenty-First Century

Season 4 reveals the inspiration, vision and techniques behind the creative works of 17 contemporary artists. Art21 travels across the country and abroad to film painters, sculptors, photographers, and filmmakers in their own spaces and in their own words. Viewers are invited behind-the-scenes to see artists at work in their studios, homes, communities, and in sites as diverse as an old-growth forest near Seattle, a military base in California, a theater academy in Warsaw, and a film set, in addition to galleries and museums. The artists profiled speak directly to the audience, describing their passions, impulses and methods. 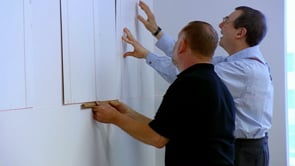 Ryman’s work explodes the classical distinctions between art as object and as surface—between sculpture and painting, between structure and ornament—emphasizing instead the role that perception and context play in creating an aesthetic experience.