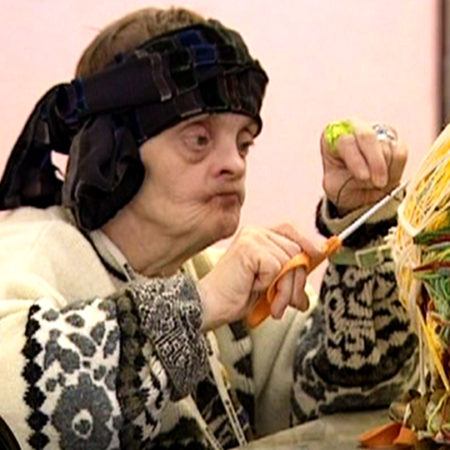 Judith Scott was born in Columbus, Ohio, in 1943. Isolated as a result of being institutionalized for most of her life due to Down syndrome and deafness, Scott began creating art at age forty-three, after being introduced to Creative Growth in 1987. Fabric quickly became her passion and medium of choice, and for the next eighteen years of her life, Scott created sculptures using yarn, twine, and strips of fabric, to wrap and knot around an array of mundane objects she discovered around her, such as keys, plastic tubing, bicycle wheels, and a shopping cart.

Scott’s vivid and enigmatic sculptures, which evolved in shape and material throughout her career, expressed her imagination in ways she could not through speech. Her abstract works have been compared to nests and cocoons while her processes alluded to both ritual and play. Described as hermetic and complex, the wrapping suggests protection and concealment.

Scott’s work is held by the permanent collections of the Museum of Modern Art, the San Francisco Museum of Modern Art, the American Folk Art Museum, the Museum of Everything, and the Collection de l’Art Brut in Switzerland. Her works have been displayed in galleries, fairs and museums around the world, most notably the 57th Venice Biennale in 2017. In 2014, the Brooklyn Museum held the first comprehensive survey of Scott’s works in an exhibition titled Judith Scott: Bound and Unbound.

Scott lived in Dutch Flat, California, and continued making art at Creative Growth Art Center until she passed away in 2005.