What’s the relationship between an artist and her subject? In this film, artist Josephine Halvorson guides a video crew through an exhibition of her paintings—What Looks Back (2011)—at Sikkema Jenkins & Co. gallery in Chelsea, Manhattan. Intimately exploring the detailed surfaces of her canvases like a roving eye, the camera evokes the conversational give-and-take between painter, object, and painting.

The subjects of Halvorson’s works are often singular, overlooked objects—masked-over windows, weathered walls, defunct mechanical devices—that she paints in their original environments. For Halvorson, who completes works on location in a single day-long session, choosing a subject to paint is an extremely personal and contingent process. As she describes it, “encountering something in the world, an object, allows me to realize a painting that I have somehow already apprehended, even though I’ve never made it.”

Traveling widely from her home in Brooklyn, Halvorson’s experiential process reaches outside the more common studio-based painting practices of New York City, taking her to train yards in Tennessee, a slaughterhouse in Iceland, and the English countryside.

Rules and Constraints
Painting
Slow Down Josephine Halvorson was born in 1981 in Brewster, Massachusetts, formerly worked in New York, and currently lives and works in Western Massachusetts. Combining acute attention to detail and an insistence on painting from life, Halvorson gives herself only one day to complete each canvas. Traveling outside of New York to paint, she works onsite, often selecting scenes that convey a sense of postindustrial grit. Interested in her relationship to the subjects of her paintings, Halvorson resists the term painter; she prefers to think of painting as recording time spent with an object in its environment.

Josephine Halvorson shares the on-location California-spanning saga behind her 2011 painting Mine Site, and just as significantly, the painting she wasn’t able to make at that location. Josephine Halvorson Gets the Conversation Going 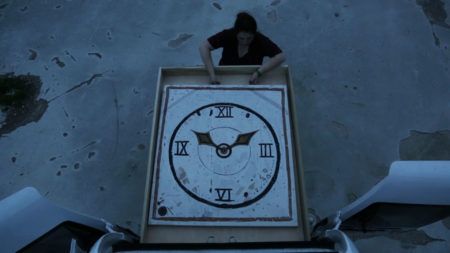 Josephine Halvorson Is on the Clock