Spirituality opens with an original work by artist, Beryl Korot. While quilting, actress and host S. Epatha Merkerson evokes the theme of spirituality as a “thread which connects us all.” Using found material culled from the broadcast, Korot manipulated the footage on her computer: slowing down, colorizing, and looping isolated gestures and sounds.

Meditative in its pace, Korot’s work harnesses the power of modern technology to create a space for reflection and intimacy. Korot’s piece blends together fleeting moments such as a sunset in the Arizona desert, a guitar ballad by John Feodorov, and the preparation of tea by Shahzia Sikander for her miniature painting. 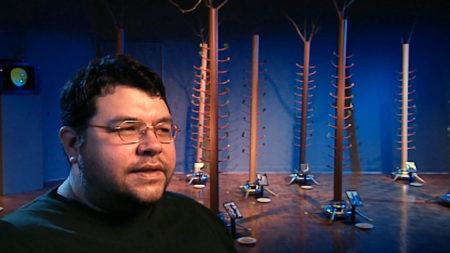