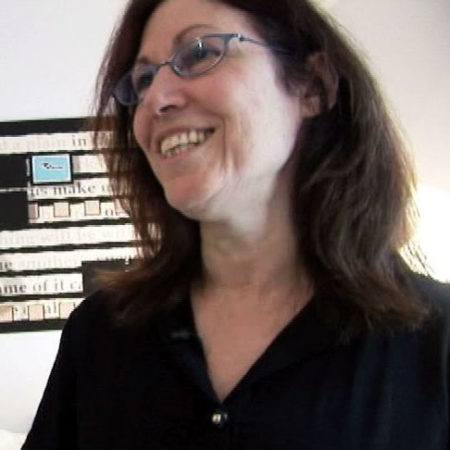 Korot’s early explorations in video as a weaving structure include the groundbreaking installation, Dachau, 1974 (1974), in which the artist edited her footage of the German concentration camp into poignant, short, repeating clips. Displayed across multiple monitors, the rhythmic weaving of the images creates a purely visual narrative. The artist’s 1976–77 work, Text and Commentary, displayed five videos of herself weaving, detailed diagrams for the weavings, the resulting tapestries, and pictographic scores that illustrated how each video was edited. Considering the loom as the first computer on Earth and a precursor to modern computing and communication technologies, Korot critically examines the forms of labor that have traditionally been considered “women’s work.” The artist has also closely collaborated with the composer Steve Reich on two projects—The Cave (1993) and Three Tales (2002)—that brought video-installation art into a theatrical context.

Korot was the cofounder and coeditor of Radical Software (1970–74), the first publication to discuss the technical and formal possibilities of the new medium of video, and she coedited Video Art: An Anthology (1976). She graduated from Queens College in 1967 with a BA in English literature. Korot lives and works in New York City.