ART21: What drew you to the architect Bruno Taut and his secret society of architects? How did early modernist practice become a touchstone for your work The Alpine Cathedral and the City-Crown?

MCELHENY: This set of architects, this secret society called the Crystal Chain, they laid the foundations for the modern world as it’s been built today. They basically set up the structures for all the modern architecture that exists. The group’s whole portfolio of drawings was about an impossible architecture, of trying to push something that could be translated into practical things. Just to draw a picture of a different world. But at the same time it did affect the foundations of modernism. And yet Taut and the Crystal Chain are also a kind of an alternate modernism. And in general, they’ve been written out of the history books. There are a few articles about them in the 50s and the 70s, but it’s only now that they’ve kind of been rediscovered and been absorbed back into the idea of how modernist architecture developed.

What’s interesting about them is what would modernism have looked like if some of these ideas and some of their way of looking at it had been adopted? For instance, one of the greatest icons of modernism—Mies van der Roe’s Farnsworth House—is basically an impossible to live in glass box in which there’s no privacy. You have to live like the building tells you to live. And so the idea of simply having an architecture in which the idea of translucency, as opposed to transparency were enacted, would be a very different lifestyle and a very different kind of idea of the world we live in.

And I think that the reason why that didn’t happen was because it didn’t go along with ideas that capitalism wanted to promote. Capitalism wants to promote this idea that money flows are a transparent process in which information is available to everybody. In order to promote that myth they build huge, monstrous buildings that are transparent, to be a material metaphor for this idea. It’s a metaphor for the notion that the corporate body reflects the needs of the community.

So while I love the Farnsworth House…if it had stayed at that scale, if it had just been some architects making some private homes for people who understood a very specific kind of aesthetic and wanted to participate in it — that’s an aesthetic that I happen to like a lot. But the idea that it should be imposed on every single building structure in the world, from Manhattan to Nairobi to Shanghai to everywhere, is a really horrible thing. The notion that these buildings should be not only for corporate structures but should be for worker’s housing leads to Cabrini-Green in Chicago—a social disaster.

Architects—they’re the ones who came up with these ideas. They spelled it out and made it possible for those things to happen. So, I mean, ideas are powerful. There’s this notion that art or creative endeavors or fanciful ideas in terms of thinking about the future are just that—fanciful. But not necessarily…they can have a huge influence on the powers that be.

MCELHENY: Well, I think there’s two different things. The concept of a modern person, I would say, is somebody who in terms of the modernist project of the 20th century believes that there is a single progressive narrative in which every year life gets better. Every year we get more sophisticated, every year we understand more, every year we discard what’s bad about us, what’s superfluous about us, what’s unnecessary about us.

The idea of the perfectibility of life—I would say that in that sense I’m not a modern person. I don’t believe in that. I think it’s a fascinating fallacy. It’s a great comedy to look at things that way, but completely false. So I would say, in that sense, I am not modern at all.

Aesthetics, though, are another thing. Aesthetics are an expression or a reflection of things that are going on around us and they translate ideas, only not directly. Aesthetics translate ideas into something that has a life of its own. One could say a perfect surface relates to modernism’s idea of perfecting process, perfecting manufacturing, and removing all evidence of human labor. That in and of itself it has those messages. But then it also ends up having other messages. It becomes abstract in a certain way.

I think what happens is as capitalism interacts with ideas of modernism it absorbs them and changes them. It gets very confused. I love the Farnsworth House or things like that. I think they’re very beautiful as a kind of aesthetic gesture and I love that kind of aesthetic. But as it gets absorbed into capitalism, capitalism changes it, takes away some of its subtleties, nuance, and makes it more practical to enact on a wide scale. And so, in a way, I think most people walk around and they don’t think about modernism. They think about capitalism.

Modernism and capitalism ended up having a kind of marriage, in a way. Or one could say that capitalism stole the ideas of modernism, or modernism served the purposes of capitalism. You could put it many different ways. I think that many people would look at the glass towers that infest the world—from Africa to Borneo—as being not about modernism at all but simply as an expression of money flows, and of the idea of a collectivized, corporate body that dominates the individual.

Because I’m an artist, I’m interested in aesthetics. And I’m interested in the idea of an aesthetic utopia as a gesture. It’s a beautiful idea of a world in which everything fits together aesthetically. And, to some extent, global capitalism has kind of done that. And it’s, I would say, pretty horrible. And so what does that mean in terms of the ideas of aesthetics, of the ideas of art, ideas of abstraction? And how do those things interrelate? I think that any artist who is interested in the history of modernism and aesthetics in the 20th century grapples with that at this point. And it’s something we need to understand better and challenge if we can.

ART21: What is the relationship of your piece The Alpine Cathedral and the City-Crown to this notion of abstraction and to the two kinds of modernism that you described? Is it a kind of utopian gesture?

MCELHENY: What I’m hoping the piece is about is this idea of a vision of another world, of a perfect world, and the problems with that. And so yeah, I think that the idea of utopia is really important, the idea that we can improve things or that we could try to reconstruct things is really important.

At the same time, if Utopia is an island off the coast, if we can see this thing out there…but then if you try land on the island — that’s when terrible things happen. And so how do you relate to those ideas? How do you both believe in utopia, the idea of designing a new world, and at the same time keep it within limits? Or keep it within a certain scale or keep it flexible so that it can adapt to the fact that other people may not have your same agenda? 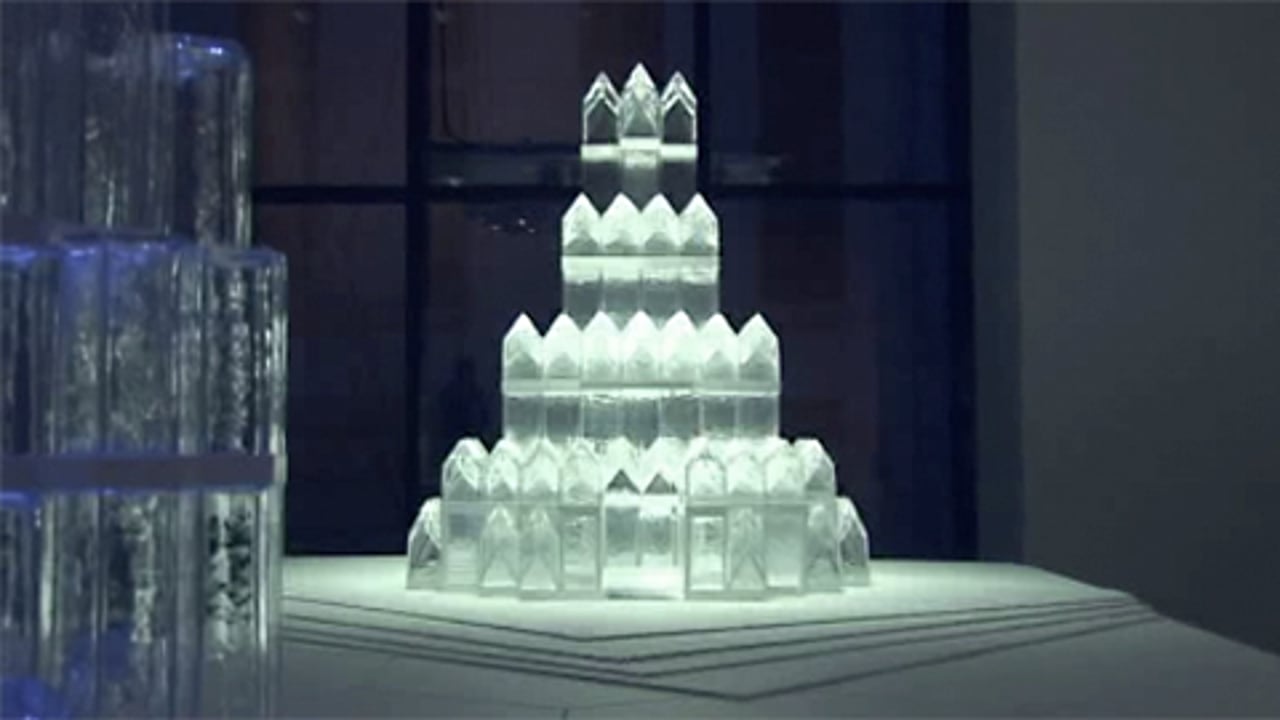 "The Alpine Cathedral and the City-Crown"