Gabriel Orozco shares how his upbringing in Mexico informs his work.

ART21: Growing up in Mexico, how much of an influence was your family on your artistic development?

OROZCO: My father is not, you know, the famous Orozco. He’s two generations after that. But my father is the third generation of muralists in Mexico. My father’s name is Mario Orozco Rivera. He worked with Siqueiros and I grew up looking at all of this when I was a kid. Then after, when I wanted to buy a car, I worked with my father for two years so I could get some money. I was not that interested in murals, but I needed some money and I learned a lot about the technique of murals.

I was surrounded by artists growing up. My mother was there, playing piano. I grew up with great photographers around like Graciela Iturbide, who was very close to my family. Many great Mexican artists and writers—and it was very political, left, all very leftist. I am not that leftist anymore because I don’t believe that this is the solution. But now that the stock market has crashed, yes, I do believe this is the solution. (LAUGHS) It’s just that I was quiet for a little while.

Being an artist, it’s hard to say that one is from the left. But it’s true that we tend to be leftist and I grew up with very political artists. It was interesting for me to watch the pros and cons of trying to be a political artist, especially in the 1960s and 1970s. You know, how difficult it is to translate good political intentions into good art. And how easy it is to translate bad political intentions into very good art. (LAUGHS) Especially when you have the market helping you a lot.

I don’t know what else I can tell you about my background, as a teenager…I mean, I liked Led Zeppelin. (LAUGHS)

ART21: Do you feel that your educational upbringing, from Montessori as a child to Marxism as a young adult, informed the dialectical logic of how you work today?

OROZCO: Well, I was just talking about this two or three days ago with the art teacher of a school here in New York. I have a three-and-a-half-year-old son, and one of the schools we were thinking he could go to is a Montessori-like school. I was talking with the director about the type of education I got, and I think one of the important things from my upbringing is that I act with a sense group work or collective work.

There’s one side of me that believes, of course, in an individual approach to things. You have to be very individual in your take on reality and your own experience. You have to be very aware of your own self. But then, when you want to communicate, you need to build up a social engagement and your own community. I think that is something that is between this Marxist background and the Montessori background. It’s not just about individual success. It’s about the building of situations, experience, and exchange.

One of the things that I’ve realized by working with other artists is that some of them were not used to doing this. They were not used to working in teams or used to polemical discussions about some issues. They are afraid sometimes—people are afraid to speak out on politics. And many artists may want to be very political in their work, but I can see sometimes that they make the same mistakes of the ’60s and ’70s by being too straightforward or using one-liners. Well…I believe they are mistakes, though I definitely make my own mistakes too.

You mentioned the word dialectical. That is a very weird word; nobody uses that word anymore. To say dialectics, now, is like, “What is that?” But I do believe in dialectical relationships in nature and in social exchanges. I even think the way I build up my systems of work is often about trying to minimize its capitalistic side, in the sense that I don’t own the means of production. I don’t have a factory. Now…I have a little one. (LAUGHS) But that is another thing we can get into. (LAUGHS) But I really try not to own the means of production, not to be so exploitative with the people around me, and not to be too into the production line and into reproducing the worst of capitalism.

But of course, on the other hand, it’s very hard to believe in the real practice of socialism in relation to art. To be a socialist artist…if that even exists, how can it be? I’m dealing with all of this. It is for another occasion. We can talk about it if you have any questions. (LAUGHS)

ART21: This little factory you mentioned, what’s going on there?

OROZCO: Well, for the Citroën car sculpture La D.S. (1993), I worked with Philipe Picoli who has been my very dear friend and assistant for the special and difficult projects because he knows about everything. And I have my limitations. So when I need help for something I don’t know how to do, I call him.

At some point, when I started to do these paintings four or five years ago, I asked him to help me. And he says, “Uh…painter? Ça va.” Because he’s French, and because he was more of a builder and a mechanic. But he said “Okay,” so then he became a French painter. (LAUGHS) He starts to look happy. He was normally this serious French guy, and now he’s happily chain smoking.

He’s my perfect match. It’s this type of relationship where when you eat, you don’t talk. You are working all day and when you are eating—you eat—you don’t talk. Once when my wife Maria came to see us we were eating and I tried to make conversation. (LAUGHS) But when we finished eating, we went right back to work. So he is more than an assistant. He’s a friend. And this series of paintings was a long-term project and we’re still doing this project.

He happens to live in a wonderful house by Le Corbusier in Paris, built in 1924, that used to be the studio of Lipchitz. So suddenly I go from not having a studio to having a Le Corbusier studio in Paris. (LAUGHS) But it’s his house. It’s not really my studio; he lives there. So I go to visit my friend and see how he’s doing with my work. (LAUGHS) So that’s very strange—it’s a communist factory in this Le Corbusier house. 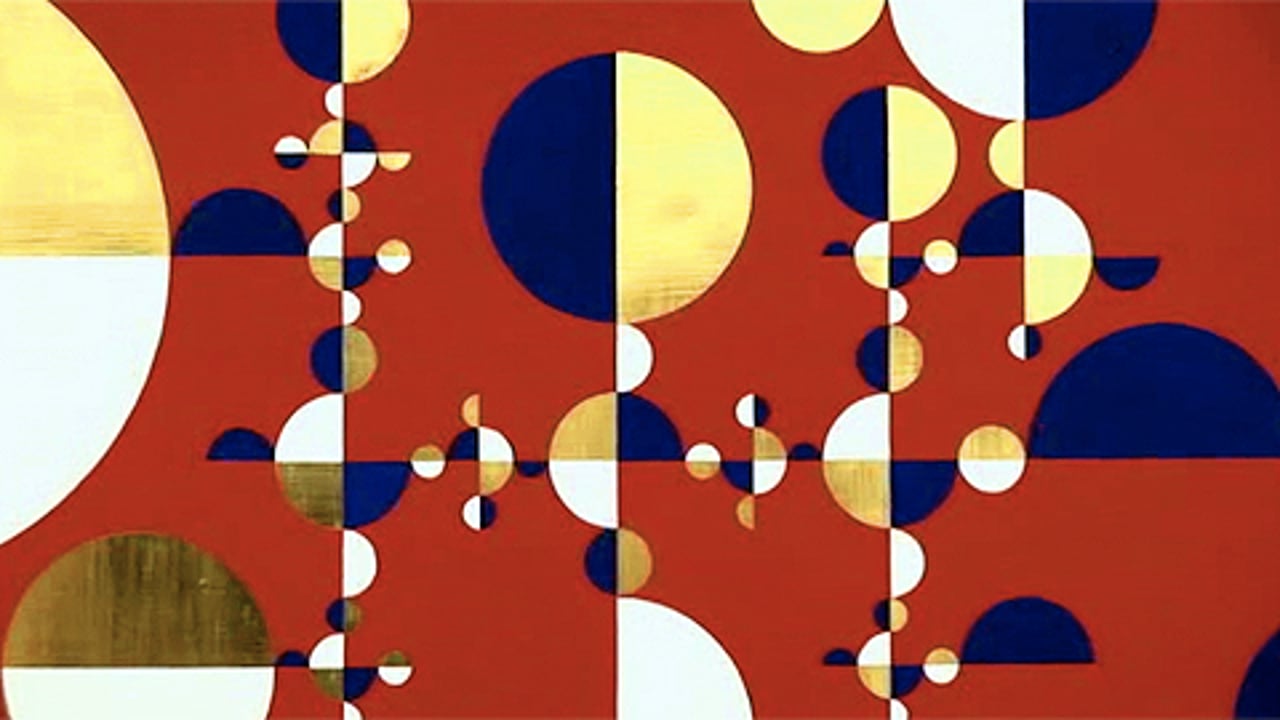