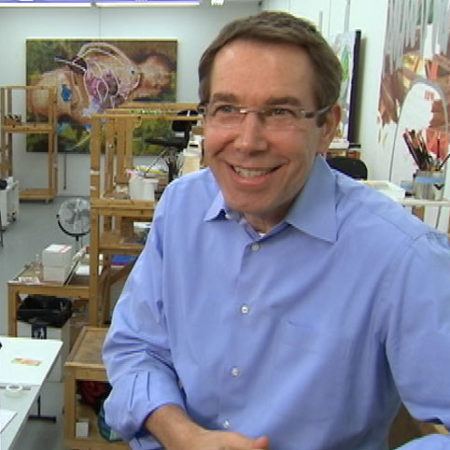 Jeff Koons was born in 1955 in York, Pennsylvania. He studied at the Art Institute of Chicago, and received a BFA from the Maryland Institute College of Art, Baltimore (1976), and honorary doctorates from the School of the Art Institute of Chicago (2008) and Corcoran College of Art and Design, Washington, DC (2002). Koons plucks images and objects from popular culture, framing questions about taste and pleasure. His contextual sleight-of-hand, which transforms banal items into sumptuous icons, takes on a psychological dimension through dramatic shifts in scale, spectacularly engineered surfaces, and subliminal allegories of animals, humans, and anthropomorphized objects.

The subject of art history is a constant undercurrent in his work, whether Koons elevates kitsch to the level of classical art, produces photos in the manner of Baroque paintings, or develops public works that borrow techniques and elements of seventeenth-century French garden design. Organizing his own studio production in a manner that rivals a Renaissance workshop, Koons makes computer-assisted, handcrafted works that communicate through their meticulous attention to detail.

In this interview, Jeff Koons talks about his relationship with art, his exhibition at the Château de Versailles, and misrepresentations of his work.