Announcing Our Third and Final Wave of 2019 Film Programming September has arrived, and Art21 is back in session with our final wave of new films for 2019. Starting today, a new film will premiere every other Wednesday at 12:00 p.m. ET through October 30—six new releases in total. Ten more new films premiered throughout 2019 across our first two waves.

The wave opens with back-to-back releases featuring Marcel Dzama‘s drawing and film collaborations with Raymond Pettibon and Amy Sedaris. Both films are available to watch in full today here on Art21.org as well as on YouTube. 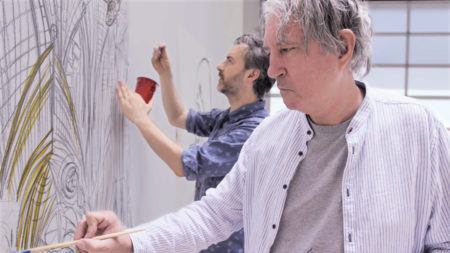 From their mutual gallery in New York City, Marcel Dzama and Raymond Pettibon collaborate on a new series of drawings. The two artists work side-by-side on large-scale drawings of cathedrals, horses, and waves, allowing their work to unfold organically. Since meeting through an event at their gallery, Pettibon and Dzama now frequently collaborate, allowing their own styles and signature imagery to influence one another. Mirroring filmmaking collaborations during his formative years in Winnipeg, Marcel Dzama directs a new film with his friends and collaborators, Amy Sedaris and Raymond Pettibon. Dzama’s filmmaking practice typically begins on paper, with his drawings capturing visual and narrative starting points. On set, Dzama encourages open-ended collaboration and improvisation with Sedaris and Pettibon, allowing for a sense of play, spontaneity, and temporary community before he returns to his more contemplative studio practice.

From the New York Close Up series; Premiered September 18 An Artist Walks into a Bar

Sculptor and performance artist Aki Sasamoto, through a blend of performed and vérité moments, reflects on her life as an artist and new parent. Exploring her fascination with happy hour culture, the artist contemplates her work across multiple scenarios—with a bartender friend at a local bar, at work in her studio at the Brooklyn Army Terminal, and firing whisky glasses at UrbanGlass—culminating with the installation of her work as part of a solo exhibition in New York City.

From the New York Close Up series; Premiered October 2 Shown both gardening and creating textile-based work for a recent installation, Stephanie Syjuco reflects on American identity and the history of colonialism as represented by crops such as corn and squash, in addition to historical fashion. Through use of “chromakey green”-colored fabrics and materials, Syjuco calls attention to aspects of American history that are ignored or go unseen.

From the New York Close Up series; Premiered October 16 Drawing from Life in Bali

A native New Yorker now working in Bali, Louise Despont shares how her adopted island home subtly shapes her intensive practice, informing the devotional, meditative, and fragile elements of her drawings. The artist relocated to Indonesia during a state of emotional vulnerability, soon discovering that her drawing practice sustained her. Through an immersive installation of drawing and sound at the Drawing Center in New York City, the artist captured the sensations experienced in the first year of living abroad.

From the New York Close Up series; Premiered October 30 An Iranian-born painter, Maryam Hoseini makes formally complicated figurative paintings that explore the body, identity, and history. The artist is seen painting in her Brooklyn studio at a moment when her work has become increasingly exhibited, having recently shown work at a solo booth during the 2019 installment of Frieze New York, as well as at an exhibition in Venice coinciding with the 2019 Venice Biennale.

From the Executive Director: New and Familiar Routines