How does an artist come to grips with the uncontrollable? Filmed over the course of four years, artist Mariah Roberston experiments with photographic chemistry in her Brooklyn darkroom, leading to a striking series of colorful cameraless abstractions. Confronted with a roll of paper that was accidentally exposed, Robertson begins to play with the ruined paper, saying “I always enjoy trying to make something out of the unwanted thing and go deeper into the disaster.” Robertson experiments with developer, fixer, and water at various concentrations and temperatures, creating vibrant images that appear to have optical or painterly effects but instead are the result of arrested chemical reactions.

Robertson faces another challenge when she discovers that metallic photo paper no longer comes in precut sheets but only on coiled rolls. Forced to adjust, she responds by tearing rolls of paper into free-form sheets with jagged edges. In contravention of standard exhibition practice, Robertson installs the fully exposed rolls of 100 feet or more as unframed sculptural ribbons, hanging them in looping swathes that respond to the surrounding architecture. Contemplating what it means to exhibit her one-of-a-kind artworks in such a vulnerable way, Robertson suggests that “all your attempts are gonna fail at controlling life, so you should let that go so you can actually see what’s happening.”

Art21 “New York Close Up” is supported, in part, by The Lambent Foundation; the New York City Department of Cultural Affairs in partnership with the City Council; The Andy Warhol Foundation for the Visual Arts; and by individual contributors. Mariah Robertson was born in 1975 in Indianapolis, Indiana, grew up in Sacramento, California, and lives and works in New York. A photographer often working without a camera, Robertson creates images through ceaseless darkroom experimentation. Without knowing exactly what outcomes her hand-applied color chemicals will cause, she balances this lack of control with her mastery of the material. Her willingness to push the boundaries of photography allows her a freedom not often found within the field. 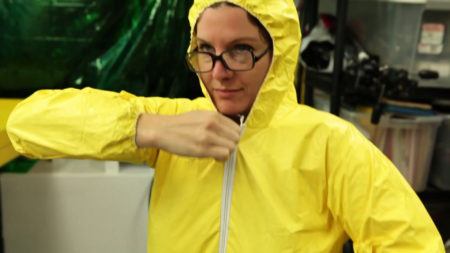