Kalup Linzy Makes His Way Through the Art World

How do artists navigate art fairs, galleries, and selling their work? In this film, artist Kalup Linzy takes the viewer on a tour of The Armory Show at New York’s Piers 92/94 on the Hudson River, reflecting on his career while meeting friends, gallerists, and curators. Among the people he bumps into are Thelma Golden, Director and Curator of The Studio Museum in Harlem, where Linzy had his first survey exhibition If it Don’t Fit (2009).

He later greets dealers George Vamvakidis of the Breeder Gallery in Athens, Greece, in whose booth Linzy is exhibiting new paintings, and Jeanie Riddle of Parisian Laundry in Montreal, Canada, who first saw Linzy’s work at a previous Armory Show. Linzy also discusses how he began to show with the (now closed) New York gallery Taxter & Spengemann. Despite ongoing relationships with multiple galleries, glowing reviews in the The New York Times, and an “art star” moniker, Linzy trains his focus on his artistic process while struggling to making a living, supporting himself through a combination of artwork sales, commissions, performance fees, lectures, grants, residencies, and awards. Kalup Linzy was born in 1977 in Clermont, Florida, formerly worked in New York, and currently lives and works in Tampa, Florida. Linzy’s theatrical works challenge ideas of gender while embracing a wide range of pop cultural forms such as soap operas, drag performances, and censored movies and radio programs from the 1930s. He has developed nearly thirty characters based on stereotypical Hollywood figures and often performs them himself. Linzy works on all aspects of his productions—writing, directing, and filming—and he has combined his DIY aesthetic with high-profile collaborations with figures such as James Franco and Chloe Sevigny. 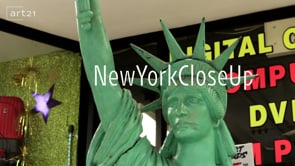