What can an artist learn from the hard sciences? In this film, artist David Brooks discusses the motivations and broader meanings behind his on-going work as a volunteer with conservation biologists in the Amazon basin region of South America. Long fascinated by birds and fish, Brooks has been doing frequent field work since 2005 with conservation biologist Dr. Nathan Lujan and his research team in Ecuador, Peru, and Venezuela, studying the evolution of the local armored catfish populations.

Working directly in and along rivers, Brooks collects, documents, and preserves the armored catfish for the team. It’s a uniquely hands on opportunity to experience the wildly diverse ecosystems of the Amazon region—to “witness evolution itself”—as well as the chance to interact directly with the scientists themselves. For Brooks, the scientists’ insistently multi-disciplinary approach—which takes into consideration a complex and intersecting set of geologic, ecologic, cultural, and economic factors—is not just a model for his own artistic practice but a way of creating a more “robust personal worldview.”

Features artworks from the series Still Life with Stampede and Guano (2011) at NADA Miami and the Florida Keys Wild Bird Center and the exhibition Notes on Structure (2012) at American Contemporary, New York. David Brooks was born in 1975 in Brazil, Indiana, and lives and works in New York. Brooks’s work is driven by his interest in the ways in which humans interact with natural and built environments. Working as a volunteer with biologists in the Amazon basin, the artist draws parallels between the scientific process and an artistic desire to understand the world. His projects often bring natural elements into an art context. 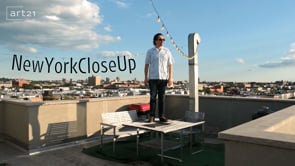