In this film, Matthew Ritchie describes his fascination with using post-apocalyptic imagery. Focusing on the aftermath of destruction fabricated within his video works The Iron City (2007) and Raphael (2007), Ritchie describes the relevance of apocalyptic imagery in entertainment. “All of the movies just show the world turning into different versions of the same apocalypse. Everyone get’s really excited about the end of the world,” says the artist. “But imagine a movie that was just touring around the ruins afterward. It’s a totally different feeling—they don’t make movies about that.”

That unrealized movie is best embodied in the artist’s The Iron City, a densely layered audio and visual projection that shifts in response to human presence within the gallery. Through a round aperture reminiscent of the porthole of a ship, or the lens of a camera, the viewer experiences a tunnel-visioned perspective of a post-apocalyptic world.

Digital MediaInstallationProjectionSculptureSoundVideo
Being an Artist Matthew Ritchie’s artistic mission has been no less ambitious than an attempt to represent the entire universe and the structures of knowledge and belief that we use to understand and visualize it. The artist’s paintings, installations, and narrative threads delineate the universe’s formation as well as the attempts and limits of human consciousness to comprehend its vastness. Although often described as a painter, Ritchie creates works on paper, prints, light-box drawings, floor-to-wall installations, freestanding sculpture, websites, and short stories, which tie his sprawling works together into a narrative structure. 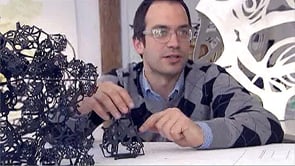 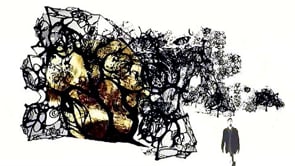