"The Wave of the World"Lynda Benglis

Artist Lynda Benglis reunites with her first fountain, The Wave of the World (1983–84), which went missing in the years following the 1984 Louisiana World Exposition where the work was originally installed. Shown being repaired at the Modern Art Foundry in Queens, NY—the site where the work was originally cast—the large bronze cantilever was created after Benglis was awarded a commission to produce a fountain for the Louisiana World Exposition, a World’s Fair that took place in New Orleans.

“Essentially, I think I repeat ideas of nature, and I process them and interpret them,” says Benglis, who grew up navigating the bayous of Louisiana and creating objects out of natural materials. Benglis attempts to harness her early creative impulses, which she says people learn to repress as adults. “It’s exciting for me to feel that same excitement that I felt as a kid.”

Included in this episode are never-before-seen photographs taken by Peter Bellamy that show Benglis creating the model for the fountain through her innovative use of expanding foam and wire mesh. The Wave of the World is currently on view in New Orleans City Park, an installation that was made possible with the support of The Helis Foundation.

Art21 Exclusive is supported, in part, by The Helis Foundation, the New York City Department of Cultural Affairs in partnership with the City Council; 21c Museum Hotel, and by individual contributors. A pioneer of a form of abstraction in which each work is the result of materials in action—poured latex and foam, cinched metal, dripped wax—Lynda Benglis has created sculptures that eschew minimalist reserve in favor of bold colors, sensual lines, and lyrical references to the human body. But her invention of new forms with unorthodox techniques also displays a reverence for cultural references that trace back to antiquity. Often working in series of knots, fans, lumps, and fountains, Benglis chooses unexpected materials, such as glitter, gold leaf, lead, and polyurethane. In more recent works, she explores diverse cultural heritages (Indian architecture, Greek statuary, Chinese ceramics), translating ancient techniques and symbols for use in contemporary contexts. In her early adoption of video, Benglis introduced feminist, biographical, and burlesque content to structuralist narratives. 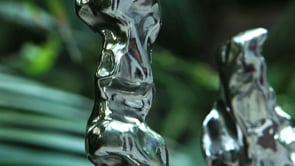 Season 6 of "Art in the Twenty-First Century"