Allan McCollum’s segment begins with his uncle Jon Gnagy’s 1950s television program Learn to Draw. Crediting his uncle’s demonstrations as an early influence, McCollum says “whenever I design a project it’s in my head…that I would be able to show someone else how to do it.”

Describing his aesthetic motivation with the paradox of “wanting to try to work in quantities…and make things that are singular and unique at the same time,” the viewer travels with the artist and his team of studio assistants to the 28th São Paolo Bienal for an installation of 1,800 hand-stenciled, graphite pencil works. McCollum describes devising “a system that would produce a shape for everybody on the planet.”

To make The Shapes Project, the artist developed a set of unique forms that, when fully combined, results in 60 billion individual shapes. McCollum later collaborates with four remote home businesses in Maine, whom he only talked to via email and phone, to produce collections of silhouettes, rubber stamps, wood ornaments, and copper cookie cutters. 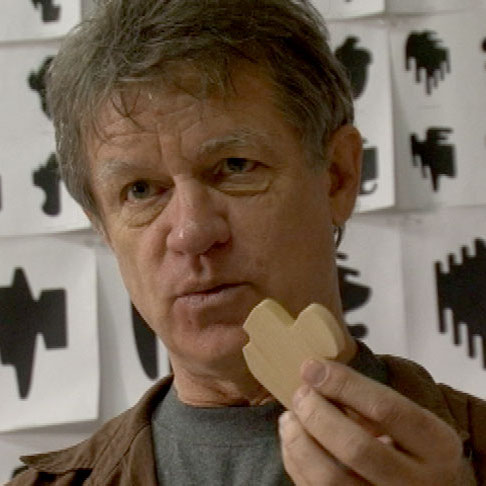 Applying strategies of mass production to handmade objects, Allan McCollum’s labor-intensive practice questions the intrinsic value of the unique work of art. McCollum’s installations—fields of vast numbers of small-scale works, systematically arranged—are the product of many tiny gestures, built up over time. Viewing his work often produces a sublime effect—as one slowly realizes that the dizzying array of thousands of identical-looking shapes is, in fact, composed of subtly different, distinct things. Economical in form, yet curious in function, his work and mechanical-looking processes are infused with humor and humility.