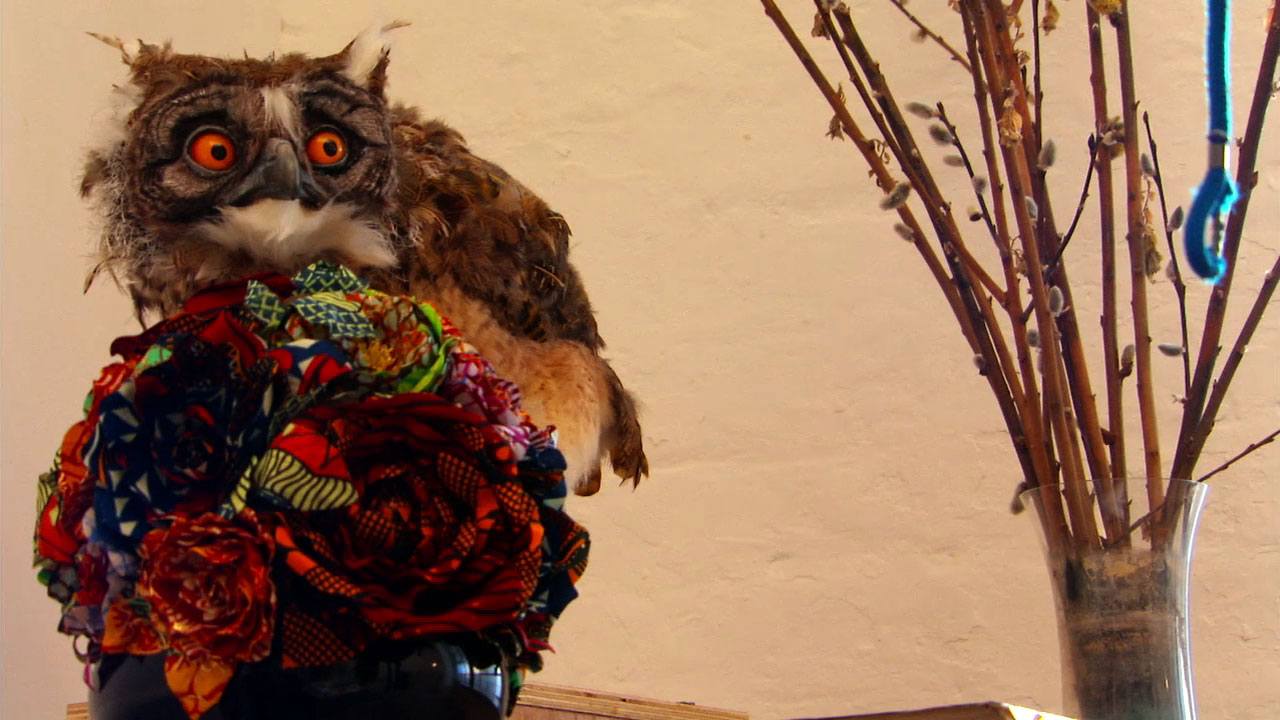 ART21: What’s your process with your assistant Ann Marie Peña? How does she determine what goes where in the collages? How are you instructing her?

YINKA SHONIBARE CBE (RA): I only speak when I don’t like something. And I don’t always get rid of things I don’t like because sometimes those are also good. Everyone who works with me is a creative person in his or her own right, so if that person has a valuable contribution, I will accept it. Part of the process is allowing others to do what feels good to them intuitively. But I need to have some kind of connection with that person on a creative level. I tend to work longer with people who I feel connected to creatively, people with whom I have some kind of an understanding.

If I stood over Ann Marie and talked her through every little bit, then I’d be making some kind of instruction manual and I don’t want the work to have that feel. I want it to be a dialogue, for Ann Marie to react to my drawings and then I react to work that she’s done. It’s a dynamic process that creates a kind of tension in the work that would be difficult to achieve if I instructed every single part. I may be the originator of this style and the work that we are doing, but the result of it is not totally predetermined. In a way, this connects to the Three BY Three exhibition I’ve been doing here in London. I invite three artists to invite three artists each to show their work in a warehouse space. Because I’m not selecting the artists directly, I don’t know what kind of exhibition I’m going to get. I don’t have a clue until the show is up. What I see are unexpected juxtapositions that I’m absolutely certain I wouldn’t have made on my own. The Three BY Three exhibitions have that element of chance that I look for in my drawings. ART21: Explain how you’re developing the Three BY Three space.

SHONIBARE: I purchased a warehouse located along Regent’s Canal in East London. At the moment I’m just using the space for the Three BY Three exhibitions. But hopefully the warehouse will be my new home and studio. I’m also planning to create rooms for artists as part of an international artist’s residency. I will also host salons, seminars, and talks. I want it to be an active space where artists can exchange ideas. Unfortunately in the past ten years art has been reduced to commodity. But dialogue is very much what art is about and can be about. When sales figures become the dominant discourse it ceases to be interesting to me. The response to Three BY Three has been fantastic because the artists are very happy to have a space in which they can meet other artists who are not with commercial galleries. If you’re an artist and you don’t have a commercial gallery, it’s quite difficult to find a network of support. What I’m trying to do is create a space for people who want to support each other—a creative environment with creative people who are challenging existing ways of looking at things.

ART21: Is your vision for this space sort of utopian?

SHONIBARE: I think you have to be a bit utopian to be an artist because it’s not a very realistic occupation. You’re risking not being able to make a living. You have to be a bit naïve and utopian to get involved in the arts. But I don’t mind that. Being an artist is in itself a utopian idea, because I don’t really make anything useful. So wanting to create a physical embodiment of that philosophy in the warehouse is just an extension of what I am already. Half the time I don’t actually believe that I am doing what I’m doing. I’m realizing my dreams and that somehow is also my profession. There’s no line between the personal and the professional. I feel very lucky that I can realize my utopian dreams and still survive.

I feel that our society, our whole economy even, is underpinned by ideas. If there were no ideas, nothing would really function, so I think that having an experimental space where people can be free is important. Artists should have a space in which they can fail and the art market doesn’t really allow room for failure—there’s too much at stake. I want my house to be a space where artists can talk about things and make mistakes, where making mistakes doesn’t really matter, where people can develop ideas and it’s not dependent on whether they make anything to sell. It’s just a process. SHONIBARE: Realistically speaking there is no such thing as failure, is there? Whenever there’s some kind of destruction or disaster it inevitably leads to another thing. That disaster is responsible for creating the new thing. Failure is just as valuable as non-failure.

If an artist was showing with a gallery and the gallery couldn’t sell any of the work, maybe that might be regarded as some kind of failure. But what I would like to do is to take art out of that cause and effect scenario and into something much more fundamental: thought and ideas.

ART21: I think what you’re saying is that failure isn’t really failure.

SHONIBARE: Exactly. At the time of a failure, it just seems like the absolute end of the world.