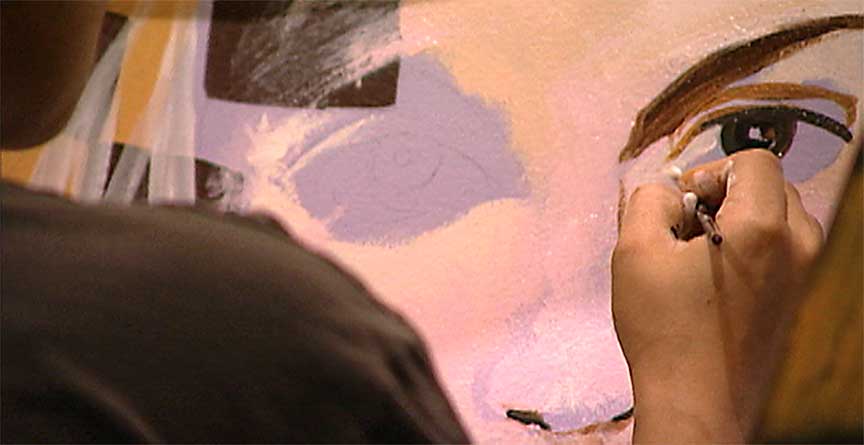 ART21: I’m noticing the way in which images are revealed and concealed by the layers of tissue paper in your installation work. What does the layering refer to, and what is your intention in using it?

SIKANDER: At some level, the idea of layering here—through painting on the wall and covering it up with tissue, with paper, and then putting more drawings in front of it—that kind of space, or that experience of space through those layers, suggests a certain sense of meaning being either manipulated or meaning being constructed, or that there is more to understand than a simplistic reading of something. So, it does allude to a lot of meaning, which becomes significant, culturally. And I think experience, or the idea of veiling and revealing here, becomes important because a lot of my work is deeply personal. And it also takes a lot of liberty through personal experiences. It kind of takes a jump-start from there—whether at a humorous level or at a level where one intends to subvert something—it takes on and challenges how people read work, or how people read different cultures, or one’s own sort of reaction to those experiences. And so, in the quest of developing a vocabulary, I’m very interested in personal space and the cultural space.

And so, the imageries that those paintings occupy is like looking at them from a very objective space and then taking elements from the Hindu experience and putting them in the experience of the Mughal—which is Muslim patronage, but it’s not necessarily a Muslim school of painting. So, the idea is—since there is not a very solid discourse, definitely not a very critical one that exists on the history of miniature painting—it’s open for interpretation. And it’s also defined in a very descriptive, chronological way, so the importance of looking at it critically has been reduced. So, one just looks at it and reads it in a simplistic fashion. All of those elements, I think, are so ripe to then play with. And when I came to the U.S., I was so aware of having this neutral space, where I could look into and understand more of the Hindu schools of painting. Growing up in Pakistan, I didn’t have much access to miniature painting to begin with, because of a lack of books and resources and libraries and all of that. And also, because of this separation of India [and] Pakistan and everybody’s identity related to it, one grew up kind of fascinated with the other. And I was very into Hindu mythology. But when I use the goddess, it’s not a particular goddess that I’m using or referring to. It’s the idea of the goddess: the goddess being just the opposite of the Muslim belief, where idol worshipping is something that is blasphemous. So, this idea of the god and goddesses is a foreign aspect. And within a visual vocabulary, when one is looking at things and dealing with this idea of the image . . . Then, as an artist, how do you separate the many layers? How are the Pakistanis trying to define that? “This art is ours” and “This art isn’t.” And so, whatever came under Muslim patronage suddenly became Pakistani heritage. All of these aspects are so intertwined with the social-political identities being defined.

And the relation to Urdu literature plays a very significant part here, because of the whole Muslim identity during British occupancy. When the idea of a separate homeland for Muslims was being defined, Urdu literature became the main form of expression where these political ideas were played out. As a result of it, the poetry became revolutionary and was accessible to the masses.

That aspect is also related to this way of work, where it’s something with no ownership, something experienced. When people come in, the viewer can experience it, but doesn’t necessarily have to know where it’s coming from. And in the same sense, the goddess becomes not important, whether it’s Kali or Durga; it’s the idea of it, the allusion to the opposition of the veil.

So, I’m stripping the identity of the goddess and putting the veil on its head. One is dealing with two extremes of image. The goddess image is something that is very familiar to media. It’s this image with several hands, and yet it’s not a particular goddess, because I was not interested in that. I was interested in coming up with a definition that could occupy the entirety of that experience as such, and the dilemmas of it.

Again, it’s about raising issues about stereotypes with the veil and the goddess and the interplay of both. And yet the goddess as such becomes a problematic issue, and the veil also, because it’s not like the oppression, or the subversion. So, in that sense, the veiling and revealing becomes the cause and effect for me, because I’m also investigating these things as I grow as an artist.

But these are very loaded issues to take on because the minute you bring the word veil into the equation, it connects you to a Muslim identity, or a woman’s identity. And that was the last thing on my mind, because it’s not my experience. I never wore one. I have a very hard time relating to that notion, and I cannot speak on behalf of women who either wear a veil or choose to wear one. Culturally, it’s not my experience of having grown up in Pakistan. But the minute you leave that country and you come here . . . It became such a significant topic of discussion that at one level I let it come into my work, and at another level I was having a hard time getting rid of it. And that aspect is what interests me. For me, I want to take on that challenge. And so, it’s like veiling and revealing. There are always two sides to a story. ART21: If the goddess isn’t a specific Hindu figure, then what does she represent to you? What role does she serve in the work?

SIKANDER: The reference to the goddess, I think, for me—I am interested in the [multiple] dimensions of the female identity. The goddess could be a figure of power. It refers to empowerment, definitely. And yet there is a certain sort of dark side to it, too, where there is reference to destruction. And whether it’s destruction of evil or good is left in the background.

But here again, if the figure of the goddess is about this idea (a figure of power), the veil, when it comes on its head—does that mean that the veil is disempowering the figure? The idea of the veil is something that isn’t revealing—so, do not underestimate what’s behind the veil, either. So, the minute I started mixing up these different traditions and meanings, it only led to a marriage of more meanings. [And] at the same time, the sort of intimacy of the difference, too. I became more and more interested in that, again.

The dialogue was not about East and West; it was more about East and East. For me, I was interested in understanding Hindu-Muslim aesthetics, but at the same time, a vocabulary that is very hybrid in its origins. Also, looking at Akbar’s period (one of the Mughal emperors in the sixteenth century), the art and the painting and the political discourse of his experience was so hybrid. And he recognized all of it, that notion of a plural India, when you look at the brilliance with which he has generated art forms and language and literature. Now, one is involved with coming to America and dealing with this post-colonial dialogue—and this plurality of experience, and this multicultural dimension to things, and globalization—and it is not a very foreign phenomenon: it happened in history.

So, in that sense, it’s how cycles come to an end. It’s sort of the idea of spirituality right there; one kind of recognizes it. And so, for me, there’s no separation; you can’t separate the many layers of Hindu-Muslim experience, to say “This is Pakistani” or “This is Indian” or “This is Muslim” or “This is Hindu.” All of those aspects played a part, and they’re like layers of meaning over layers of time. And there’s no separation there. So, part of it was actually paying homage to that notion, but in the process, almost subverting it, too.