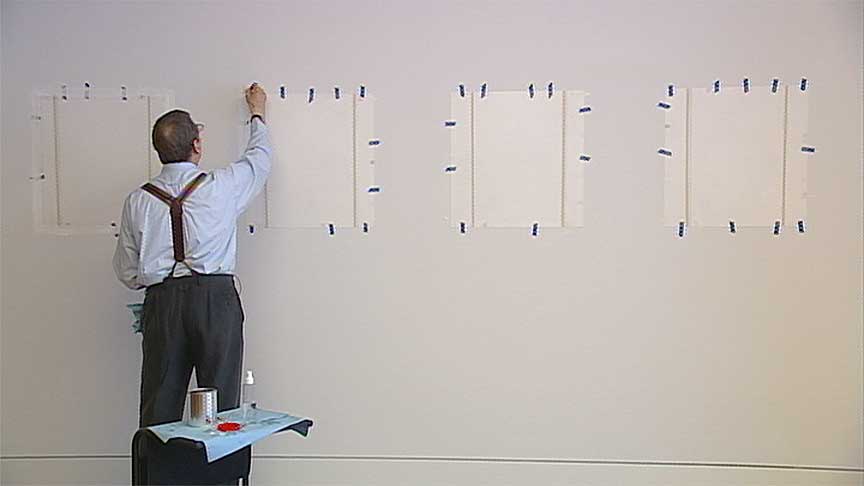 Robert Ryman discusses the reasoning behind his white squares, as well as the roles that a painting’s surface and viewers play in his work.

ART21: Can you talk about the way you use the color white in your paintings?

RYMAN: White has a tendency to make things visible. With white, you can see more of a nuance; you can see more. I’ve said before that, if you spill coffee on a white shirt, you can see the coffee very clearly. If you spill it on a dark shirt, you don’t see it as well. So, it wasn’t a matter of white, the color. I was not really interested in that. I started to cover up colors with white in the 1950s. It has only been recently, in 2004, that I did a series of white paintings in which I was actually painting the color white. Before that, I’d never really thought of white as being a color, in that sense.

ART21: That’s a long time to use a color in that particular way.

RYMAN: Until then, it was just that white could do things that other colors could not do. If I look at some white panels in my studio, I see the white—but I am not conscious of them being white. They react with the wood, the color, the light, and with the wall itself. They become something other than just the color white. That’s the way I think of it. It allows things to be done that ordinarily you couldn’t see.

RYMAN: If the panels were black or blue or red, they would become a different thing. You would see the color, and the panels would become more object-like themselves and more about that color. But white is such a neutral situation that, when you see it, you’re not thinking “white.” You’re just able to see something as what it is.

ART21: How important is surface in your work?

RYMAN: Well, since I’m not working with illusion or narrative that allows me the freedom to explore . . . The painting can be very thin, very close to the wall. Sometimes it can come away from the wall. I think it’s important that it stay connected to the wall; I think it needs the wall itself to be complete. But it opens up many possibilities. ART21: Is there any specific ideology or kind of thinking that could be connected with your work?

RYMAN: Existentialism. Years ago, I read a lot of that, and I liked it. I agreed with it. But I don’t know how much that has to do with my painting. It’s kind of senseless to look back. I mean, I’m always involved with tomorrow and today, not yesterday. I’m always thinking about tomorrow.

ART21: Does that affect your painting?

RYMAN: In painting, you always have a structure. You have to have that in order to go forward, to put things together. My painting is not limited at all. I have many possibilities, in terms of approach. And the reason I have that is because I’m not limited by a certain narrative that I want to get across. There’s no symbolism or story that I need to tell or some kind of political project that I might want to do. I’m not limited by any of that. I don’t have any of those things to stop me from experimenting and going forward.

ART21: So, you’re constantly finding new ways to do things.

RYMAN: I like to do something that I don’t exactly know how to do. I don’t like to do things that I know I can do. If I take a certain approach to certain paintings, when I finish the problem, I don’t have to go on with it. I’m more interested in finding what else I can do that’s more of a challenge for me.

ART21: Do you think your viewers find your work satisfying?

ART21: How did you arrive at painting mostly squares?

RYMAN: The square? I began with that in the 1950s. The square has always just been an equal-sided space that I could work with. Somehow it’s become so natural to me that I just don’t think of it any other way. It doesn’t have the feeling of a landscape or some kind of window or doorway that we usually associate with rectangles. It’s just a very neutral kind of space, and it seems to feel right to me because of my approach to painting. ART21: Do you think your work asks for a certain type of viewing situation?

RYMAN: In a sense, the paintings move outward aesthetically. They go out into the space of the room. They’re involved in that space, and certainly they involve the wall itself. So, if you have something else next to the painting—if the painting were on a brick wall—that would not be good. You would have a lot of visual activity going on along the wall, and that would dilute the painting. A brightly colored wall would also change the painting—particularly some of those that are on translucent material or the ones with waxed paper or plastics. All of that changes the feeling of a painting, completely. It needs to be on a neutral, smooth surface. Even though light is important, it doesn’t have to be special light.

But the painting needs a certain reverent atmosphere to be complete. It has to be in a situation so it can reveal itself—since it is what it is, on its own. It’s not representing anything else—what you’re seeing is really what it is—so it has to be in a certain visual situation because anything else will dilute or disturb it. The paintings do not signify anything other than how they work in the environment.

ART21: Why are your series often produced in odd numbers?

RYMAN: It has to do with the way we see things. Aesthetically we see things in a certain way. I like odd numbers because you always have a center with an odd number. With an odd number, you have an expansive feeling—a feeling of things moving out from the sides. With an even number, you have the wall as the center, so it’s more of an enclosed feeling. It doesn’t move outward as much as the odd number does—which is also okay. But certain things have different feelings, visually. If I have something that has ten elements, it’s not so crucial, because I have enough that I don’t really need a center. A triptych is ideal because you have a center. A diptych is always a problem; they never seem to work very well. It’s just the way we see things. ART21: What other painters have influenced your work?

RYMAN: I was very influenced by Matisse, by his sureness. In painting, something has to look easy, even though it might not be easy. [Matisse’s work] looked like everything just came together easily and naturally. And I try to do that myself. Maybe I’m not always successful, but that’s an important part of painting, that it has to have that feeling. Like a Pollock, for instance—it looks so easy, but it wasn’t so easy. But it has to have that feeling, like it just happened.

ART21: Any other artists?

RYMAN: There are many. Cezanne, for instance—what fantastic things he did. He was always one of my favorite painters—his structure and his paint handling. I mean, he really understood paint. He understood how it works and what it could do. The way he could put things together was phenomenal.

Rothko was very influential for me. When I first saw Rothko, I’d never seen a painting that way before. And I didn’t know what he was doing. I’d been looking at pictures all the time, and here was something that had a totally different feeling to it.

ART21: Have you ever felt any of your paintings were a complete failure?

RYMAN: No, there’s never any failure. I mean, I would never show a painting that I didn’t feel right about. I would never let it out. There have been a few paintings that I’ve destroyed through the years, but some I wish I hadn’t. At the time, the paintings weren’t what I wanted at the moment, so I rejected them. But usually I don’t have any work that I would call a failure. Usually I work the paintings through so that they are okay in the end.