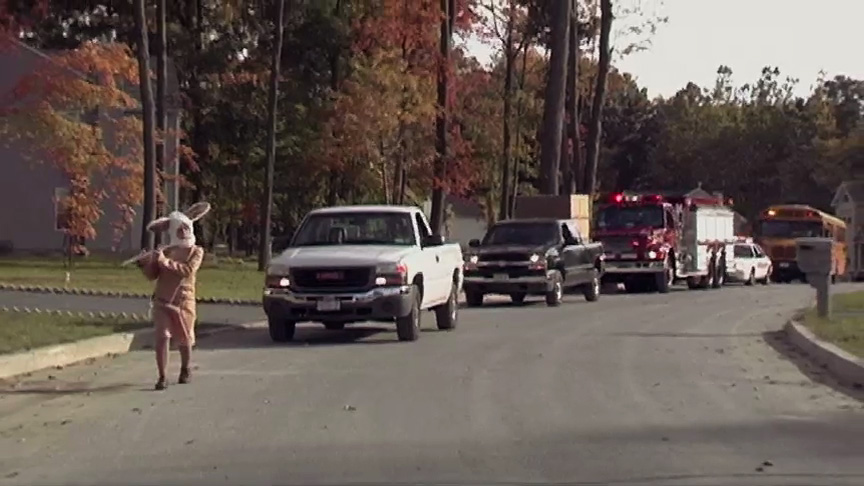 ART21: There’s a very poetic element to a lot of what you create.

HUYGHE: But it’s very difficult to say what’s poetic in my work because it’s not something mathematical. It’s not a recipe. There’s no reason to have a recipe and say that I’m going to be poetic. I never do that. It’s rarely within the form itself. It’s more in the process. If there is something poetic, it’s poetic in the procedure, in the way things are made.

ART21: What is the poetic procedure in your work, Streamside Day?

HUYGHE: Streamside is a little town, north of New York. It was under construction when I found it, and I created—or invented—a tradition for it. I was interested in the notion of celebration, and what it means to celebrate. I tried to find a story within the context of the local situation, looking for what the people there had in common. I found something basic: they all came from somewhere else and encountered nature. I invented a kind of score, a scripted program, and I filmed that—all these people traveling to experience what they think is wilderness. In fact, it’s a wilderness that’s a total construct, rebuilt by man for four hundred years. So, I started the film with a re-enactment of the beginning of Bambi, with the deer going from nature to this new town. And then you have two little girls who go from the town to nature. And that is the basis of the tradition I created. But that’s not what really interested me. I was interested in creating a ritual that the people in the town would actually celebrate because it’s based on what they share. ART21: What are the kinds of cultural things that create the framework for this piece?

ART21: Describe what is going on right now, as we’re watching the film.

HUYGHE: Right now, this animal is entering a white cube in a certain way. This deer goes from nature, which has a certain complexity, to this kind of white cube. And then you see a little girl at her home, and she’s traveling from her old home to her new home. So, it’s exactly the same movement. One is by the animal; one is by a human. It’s two simple crossings or migrations.

I can give an example. Let’s say you have a documentary about a farmer and cows. They exist. You arrive, open your camera, and film them. Then you shut the camera off and go back home, but still the farmer and the cow are there after you leave. In fiction, you have this character in front of you; you open your camera (when I say camera, I simply mean something to record, it could be painting or whatever you want). And once you close your camera, the character stops and they go home. They’re not a character anymore. ART21: The theme of celebration runs through a lot of your recent work.

HUYGHE: In Streamside Day, I was building a celebration. I was even building a source, a kind of mythology. Then people would play in this mythology in the form of a day off, a celebration, once a year.

ART21: Was there something particular about Streamside, the town, that interested you at the outset?

HUYGHE: This is a town that has no organicity. It’s an image—an instant, pure image. Months ago, there was no town. Now, it’s a brand new town with roads. In a certain way, it’s funny: You arrive in this town, and you visit the model home. It’s postmodern. It has a big poster saying: postmodern. It’s not modern, not a cube, not a Corbusier, not a Mies van der Rohe. It’s a traditional, nice New England house. It’s a dystopia, in a certain way. This is the feeling of a community. This is the image of the past. This is a fear of the present.

ART21: Where does your interest in the idea of celebration come from?

HUYGHE: Celebration has always interested me. I mean, for example, Halloween. I think Halloween was first an Irish celebration, and then it went to the U.S. and became a very big American celebration. And I think ten years ago, in the beginning of the ’90s, we started to have Halloween in France. Of course, there is some economic reason behind it. But we don’t celebrate anymore Halloween in France. We celebrated it for ten years. It was an attempt to transplant a celebration, but it didn’t work. It’s like when you transplant an organ, and then the body refuses it because there’s no reason to accept it.

ART21: What is the relationship between the film and the event?

HUYGHE: We should not forget that before this was a film, it was a celebration. The film came after. I also invited some writers, and there were some photographers. There was even an architect who worked on the possibility of a community center. So, the film is just one way to grab this situation. ART21: How did the idea evolve?

HUYGHE: When I first saw this town, I just went to see all the people. And then I said, “I’m going to invent a celebration because it’s a brand new place.” Then, of course, we announced the fact that the celebration would happen. And then I organized the whole celebration—from the parade to the concert, to the food, to the mayor giving a speech, to the kids playing—everything. So, in a certain way, it’s a script. It’s a recipe, a score. And this score can be played again, next year, at the same time.

HUYGHE: At the end of the day, people go back home. There’s this giant balloon and moonlight. There’s only one light to illuminate the whole town. And so, it’s a second moon, essentially. For me, the most important thing is this idea that you invent this town—you set up this situation, this performance—but then in a loop of the year, it will just come back and come back and come back. That’s what interests me. To produce a time, a duration that will come back in time—of course, it’s an organic system, so it stays or it doesn’t, or it modifies itself—but that’s, for me, the most important part.