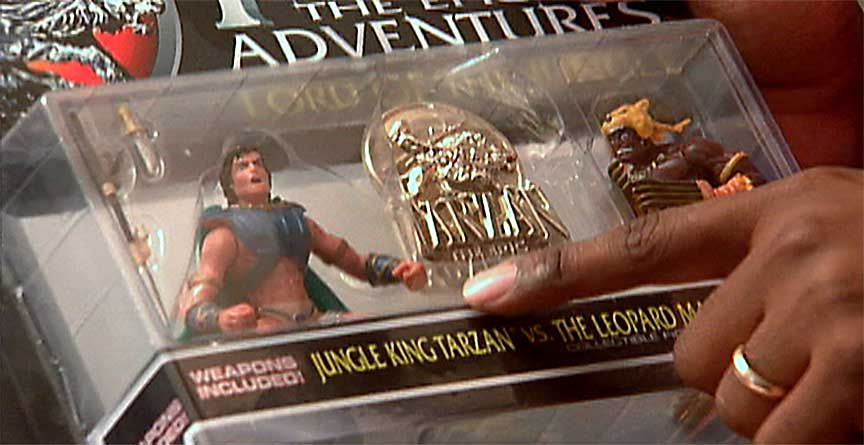 Artist Michael Ray Charles discusses his connection to black memorabilia and its influence on his work.

ART21: How and why did you start collecting black memorabilia?

CHARLES: I was in graduate school at the University of Houston, and I think everything that I did while there led up to what I’m doing now—and, of course, led up to or led me to the use of this particular image and images like it. There were a number of things that occurred, one of which was I was sort of stigmatized as a political artist, a black political artist, and, at the time, I didn’t see myself as that. It was based on the fact that I was painting images of the flag. I was in search of an image that could best articulate Americanism—could sum up what is happening, or what has happened, or what was happening with blackness. And a friend, Sean Thorton, actually—we were studio mates, [his was] a door down from mine—handed me this and said his mom picked it up. And I didn’t question it, said “Thanks,” and sort of tossed it in the corner, and I continued to search for that sense of Americanism. One day, I’m cleaning, sweeping out the studio, and I picked this up and began to really look at it.

One thing led to another and I began to do research on minstrelsy and blackface performances in the nineteenth century. This led to a series of pieces. Actually, it was the first piece that was included in an exhibition in the Houston Public Library and for which I made fifty little carriages—like, sort of like baby carriages of clay. And I made a mold of this little figurine here. I made fifty or so of these, and I displayed these, arranged these carriages as if they were stars on the flag in a similar manner. These little figures were looking inside, standing on top, inside of it—arranged in a very rhythmic way. I didn’t document it, but it was the first time I got a sense of not only the seriousness involved with the use of these images but also the emotion, the emotional presence of the past. People began to knock over the glass case and, on many occasions, condemned the presence of such imagery.

ART21: Do you still have any of the carriages or cast figurines?

CHARLES: Well, this piece is really destroyed. I gave many of the carriages and the little figurines away—oops. I only kept a few, with the idea that one day I would recreate the piece.

ART21: Did the figurine strike you as a particularly painful image at the time, as something that you would eventually make work with and about?

CHARLES: No, it didn’t. It was just something that I didn’t need and I tossed it in the corner. And when I picked it up and looked at it again, I was intrigued by how simple it was. There was a bit of anger, I think, initially: I wanted to do something about it. I wanted to do something about it so much that I created this piece called Sam, which was based on the image of Burt Williams, a nineteenth-century African-American comedian-minstrel-performer in a chicken costume and in blackface. I wanted so badly to do something about this, to rewrite this wrong, that I reversed a mask. I made a white mask, and I was drawing at the same time as I was applying paint. When I finished this piece and looked at it, there was a stare that came from behind that white mask that just, you know, opened up the floodgates.

That’s another piece I wish I had kept. It was my wife’s favorite, actually, and she’s been trying to get me to do a larger one for this show that’s coming up. But that particular piece, Sam, embodied a lot of what I do now in my work today. It didn’t have any text. There was a lot of mark making. There was an emphasis on layering and exposing layers underneath, drawing, exposing my drawing ability, and meshing the drawing process with the painting process. From there, like I mentioned, the floodgates opened. I came up with this concept of juxtaposing powerful images, of powerful females: the image of the mammy and the Statue of Liberty. And when I did that, I came up with the Liberty Perm. Then, shortly after that, I began to look at products on the shelves in stores and think about how these ideas were consumed and through what medium. And having to rely upon my background and studying advertising and design, I began to utilize the things that were the vocabulary that I had already discovered to make my art. I signed my name with pennies as a cool logo, as a seal that “This is a Michael Ray Charles.”