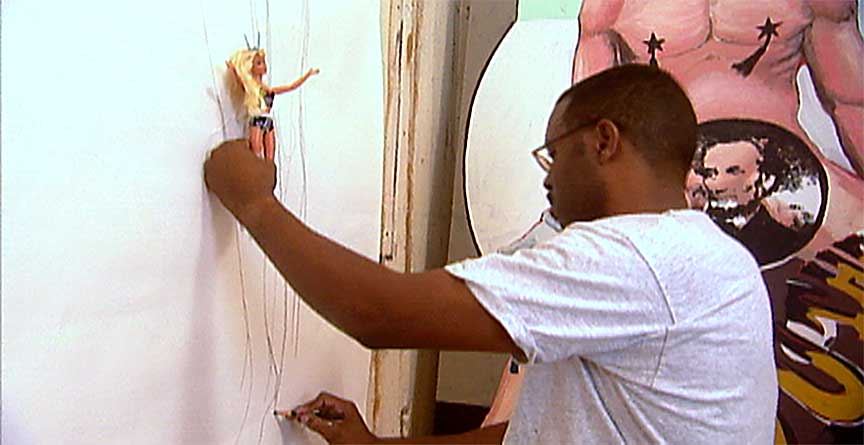 ART21: Your work has been identified as being controversial not only for white audiences but also for black audiences. Could you talk a little about this and how you view your own work with respect to this response?

CHARLES: You know, at a certain point, I was really bothered by that because I’ve heard a number of things, been called the sellout, the “Chris Rock of the art world.” (I like that one, by the way.) And people accuse me and question my blackness; they accuse me of making paintings that deal with these images because “white folks want to see these images.” And I’m saying to myself, “Boy, I don’t know”—in that white folks wanted to see these images to laugh at? And I’m saying to myself, “Well, you know, I don’t think somebody’s going to pay ten thousand dollars to say, ‘Oh, look at that, that’s black folk on the wall,’” you know. No, I didn’t think about this component. I didn’t envision myself going out on the road and talking about my work as much as I have. And now that I look back, I think a lot of people react to those images; there’s a lot of emotion. They’ve reacted to these images based on gut emotions.

I think if people had an opportunity to stand back, as some of them have had after hearing me speak about the work—really thinking about it, and looking at it, and thinking about it in the context of now, and the context of how they’re presented—some people have managed to see that, “Okay, this is something that I could at least think about quite differently than I initially had.” In other words, a lot of blacks have accused me of perpetuating stereotypes. And I think there’s a fine line between perpetuating something and questioning something. I like to get as close to it as possible in order, I guess, to create that tension, to evoke thought and to have people question how they deal with these images. I’ve seen some black folks refer to these images as black folks. I’ve seen and heard white folks refer to these images as black folks. And it’s really disturbing. They don’t say images, they don’t say representations, whether grotesque or accurate or abstracted. No, its always “that little boy” or “that little girl,” and “that little black girl” and “that little black boy.” That’s bothersome. That’s troublesome because—I’ve said this in the past—they’re images that are constructed. They’re both black and white, conceived in a white mind and believed in the black mind. Therefore it became human, in a sense.

And I think that these images are just as much white as they are black. They’ve been projected and internalized. I think people have accepted them to be, you know, representational, an accurate representation. Some black folks really see the images and say, “That’s us, but at the same time that’s not us.” So, they’re caught right in between it. Some white folks see the images and smile and laugh, and some are really concerned and disturbed. And some are quite confused, just as confused as blacks are, about my use and my angle and all. ART21: Why do you think people have such a visceral and personal response to these images and to your work?

CHARLES: Well, first of all, you’ve got to think of how these images were used in American culture. I mean, for the most part, they were everywhere, and they were used to market anything from oils to ink, from food products to clothing, and so forth and so on. So I think, again, people operate from an emotional place when they see these images because they think of the past as being something that happened and that the concepts don’t linger. But these concepts continue to affect us in many ways, in modern concepts of advertising as well as in contemporary advertisements. These concepts are re-appropriated and re-presented, so we’re not very far from them.

I’m still not sure if I’m answering your question, but I just think that it’s the history involved with the images. I met one white woman, an older woman at an exhibition of mine, who said, “Don’t make the Sambo ugly. I remember the Sambo as a little girl.” And then she says, “I taught in elementary school. I taught black kids.” And she said, “Please don’t make the Sambo ugly.” And she started to cradle; she just started to move in this manner here. And I was like, “Wow.” But then, it’s totally different for a black person. You know, I’ve heard the full gamut (older people, you know): “That’s how they used to make us look.” Or “That looked like the hair”—the reference to the hair. “That looked like Bobby.” Or “That looked like Julius,” or something like that. So, I just have to say that the concepts continue to linger and that, in my mind, allow people to place—to see these things, and say “boy” or “girl,” you know . . . Um, I didn’t answer that question correctly. (LAUGHS)

ART21: So, people have taken these images from pop culture and internalized them? They treat them as if they were part of their own family or themselves?

CHARLES: Well, I believe they have. The notions of blackness linked to humor, blackness linked to the entertainer, blackness linked to the body—all of those things are embodied in or have been packaged with the caricature of the Sambo, the darkie, the pickaninies, and products throughout early advertising, in the nineteenth century and well into the twentieth century. So blackness, I think, is linked to those things. You know, I did a painting; it was about the image of Oprah Winfrey, right? And it was titled WWW.READAMERICA, I believe. I juxtaposed the image of Oprah with the mammy image; it was a mammy-cookie-jar-type image, and I replaced the bowl with a book. Of course, it had a particular play on some contemporary images, like the concept of Big Mama in Martin Lawrence’s most recent film. Or, there was a movie made recently and it’s now a sitcom—not a sitcom, but—Soul Food? The Big Mama fixture in that particular film was very much like the mammy image: the caretaker, the one that took care of the family, in a sense. I think those notions can be linked to Oprah’s image, and I don’t mean that in a demeaning way. My grandmother cleaned white folks’ homes. I have bells in my collection, dinner bells, that people would ring for her to come and do whatever, you know. So, I don’t mean it in a malicious way, but I think these images are very much a part of who we are as blacks and very much a part of who we are as Americans. ART21: Do you think people knew what they were doing when they associated these sorts of figures, like the mammy, with products or in advertising?

CHARLES: I don’t think that early advertisers truly envisioned altering blackness with all of these representations that were being put out there—in the sense that these images, the concepts surrounding these images, would linger as long as they have in the American public. I think it was linked to early marketing practices, early advertising. Linking a product to romance, a romantic notion, the Old South, stereotypes, caricatures that came out of minstrel performances or perhaps were influenced by minstrel performances. And linking those products—early-nineteenth-century products, early-twentieth-century, well into the first half of the twentieth century—with sort of an idea of how things were, you know; therefore, providing the masses with the notion of being comfortable with the old way. Things . . . things that were a certain way: you were comfortable with them. So, I don’t think that those early advertisers or the illustrators who illustrated the products or designed the products and the marketing and the packaging—I don’t think that they had this notion that they wanted to, you know, alter what blackness meant forever in American culture. That gives them too much credit. It makes them godlike, in a sense.

ART21: Is there a but in that sentence?

CHARLES: But it happened.

ART21: The way that advertisers altered our thinking of race and blackness . . .

CHARLES: As they continued, as advertisers continue to do, they’ve altered our way of thinking. One could think about notions of blackness and how they’re linked to entertainment, athleticism, sports (which has become another form of entertainment). But never intellectualism for the most part, and if that is the case, it’s very rare. But for the most part, collectively, I would say that blackness continues to hover around this comfort zone of entertainment—providers of entertainment. You know, I think those areas are pretty comfortable for whites to see blacks in, as opposed to someone like Henry Gates or Cornel West, for example, or prominent CEOs of companies. That’s what I think.