Matthew Ritchie and Aranda/Lasch. Studies for the The Morning Line, 2008.

ART21: What are you aiming for the viewer to experience with your work?

RITCHIE: What I’m aiming for is to describe the whole spectrum of experience, simultaneously. There are an enormous number of things in the world that we know about, and there are an exponentially larger number of things that we don’t know about. And those things that we don’t know about affect the things that we think we know about all the time. So we have our daily experience, and we go through our day and things happen the way that we think they’re supposed to happen (sort of). But when something changes, we automatically accommodate to that change and read it as part of our life. This is the narrative of a person’s life, and one of the ways that we describe what’s going on is we tell stories. We always tell the stories after things have happened, not before. There is no real story of what’s going to happen next. But once something’s happened there’s always a story about how and why and what the reasons were.

In one sense what I’m trying to do is create a manual of all the codes — all the stories that have ever been told—or a way to read all those stories through a lens. What are those stories trying to describe? They’re all trying to describe the same thing, which is how everything works. Why is it, on any given day, one person crosses a street and has a great day, and another person crosses the street and is hit by a car and that’s the end of their life? We’re always trying to make sense of this dramatic shift in, this incredible potential for all of these vast, unknown forces to suddenly reach through—reach out—and touch you and that’s it. It’s always in the air, for all of us. This could be the day you win a million dollars, or the day your life is over.

So in a way these things that I’m making could be thought of as meaning machines that take apart all the stories, lay out all the parts in front of you, and then allow you to choose one little piece of the story. Instead of it being chosen for you by the forces of fate, I lay out the parts and say, “Here, you can actually pick this up and have a look at it.” See what it’s made of? Tap it on the table, bite it a little bit. See what’s going on with this piece of fortune.

A good metaphor is a pack of Tarot cards — in itself it’s not a story, but lay out the cards and it always tells a story. What I’m trying to do is give people a sense of control over the narrative. A story is not any more real or less real than anything else. A story is just something you do with your brain. It’s a function — like walking — you tell stories wherever you go. And stories are all made up of pieces. And you can change the way you understand the story by changing the way you understand the pieces. And if you can do that, in a sense you’ve changed the dynamic of how you relate to reality.

The piece The Morning Line is like a frozen piece of reality. It’s like in the movies, where everyone’s suddenly turned into a statue and only you can walk around the world. You can look behind the scenes where the puppet master is controlling everything. I’m trying to show you what’s going on, like a magician showing you his trick in slow motion: this is what it looks like when you stop everything and look at the parts you can’t see.

ART21: Where does the title for the piece come from? And what’s its relationship to music?

RITCHIE: The Morning Line takes its title from a British racing paper. It has the lineup of the day—all the horses—and what they’re going to accomplish. But to me it’s also a reference to the beginning of a new day, when everything is a new possibility.

The Morning Line building is really a gigantic musical instrument. It’s programmed with a series of scores that are based on the Medieval idea of polyphony, which is multiple sliding tracks that have a specific relationship to each other, but to the listener, the tracks always seem to be moving past each other. When polyphony was first invented, it was believed to be the Devil’s music because of its possibility for multiple interpretations. Instead of a very rigid set of canonical moves forward, you can actually have lots of different things happening at the same time. It’s about this idea of multiple voices.

Every time you come back to The Morning Line, not only does the piece track you through various technologies and produce sounds that move around you, but it’s constantly reorganizing its own musical mind. It will sing you a different song or tell you a different story every time you go through, which goes back to this idea that there’s always another story, but it’s always the same story.

Matthew Ritchie and Aranda/Lasch. Studies for the The Morning Line, 2008.

ART21: The Morning Line is a physical building, and yet it comes out of an interest in drawing, in scale, in fractals. Is there a tension between the flat one-dimensionality of drawing and architecture in three dimensions?

RITCHIE: Initially the project was to take this idea of drawing, which I was experimenting with in smaller architectural pieces, and ask “Can you make a drawing that’s in a space as big as the world? Can you draw in space?” If you’re going to draw in space, your drawing has to be supported by all the rules of reality. For what I wanted to do, it meant designing a structure out of parts and each of the parts replicates itself at smaller and smaller scale. You can take this down and down and down, all the way into the nano spectrum from the size of a cathedral. We don’t need to think about a given building as having a single frame of reference, which is the size of a human being who’s going to go through the door, use the washroom, and sit down at a table and a chair. I want to think about a building that is designed for the universe to occupy it—the same way it occupies everything else—which is to say at every single scale simultaneously.

It’s a kind of trick that people have been trying to do for 3,000 years, though they never succeeded in solving the geometry of making a structure of this kind scale in three dimensions. There are drawings going back to Plato of this kind of geometry working as a model of the universe, but no one could ever make it because they didn’t have computers

The Morning Line is built out of what’s called a truncated tetrahedron, which is a pyramid with the corners chopped off. If you look past the tetrahedron shape and consider just the surface of it — the drawing on the surface — every point in this sculpture attaches to another point. The line becomes an infinitely recursive form moving through space. You can start to draw a trajectory with it. You’re drawing a journey, and a journey is always the thing that I’m most interested in.

We’ve sort of grappled with what to call The Morning Line structure. You could call it a quantum building, because any one of these tetrahedra can support across its surface twenty-two other smaller tetrahedra of the next scale down and so on. It can grow like a crystal, infinitely smaller in any direction. You could also call it a holographic building, because the premise of holographic theory is that the universe is the same at every scale. Just like a hologram—if you break it—it has a million little tiny holograms inside, all the way down.

The idea is that at every level it maintains the same integrity, but it also maintains the property of the drawing, which is that every little point will always connect to every other little point. There’s always a connection. It’s not just about bricks; it’s about lines moving through space and connecting to the next level down. The journey moves through scale. There’s a connection between the speck of dust that gets into the brake line and jams the brakes of the car that doesn’t stop in time to knock someone over in the road. In the end it all comes back down to a speck of dust. Shakespeare’s famous “my kingdom for a horse.” 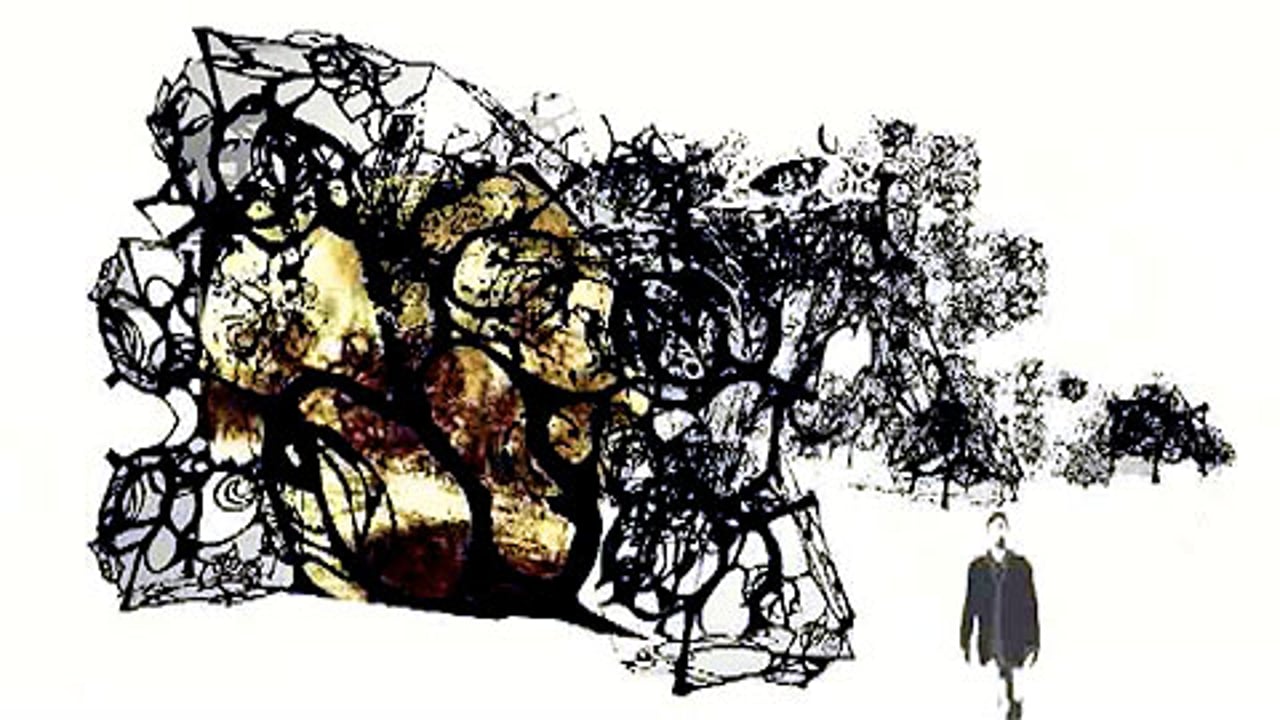