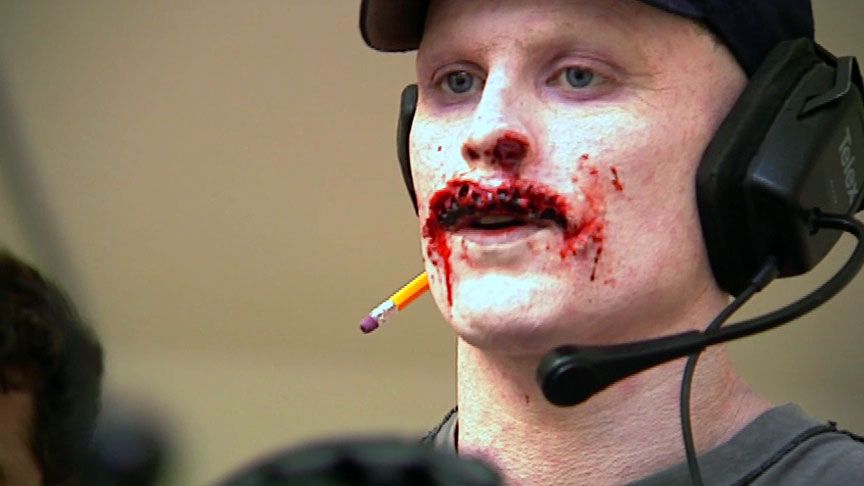 ART21: How close does the filming process follow the pre-written script and storyboards for CREMASTER 3?

BARNEY: It depends. You’ve seen the way the storyboard is structured, and in certain cases it follows how a real storyboard would be drawn. If there’s a detail of something we’re shooting that needs to tell a story itself, those tend to be drawn. Bigger, narrative situations are really just organized as written lists. They’re scheduled by camera setup in cases like this, where the camera car was there for a day, so we covered everything we could from the car. A lot of these angles, aside from the moving camera car, are really about trying to mimic broadcast sports angles in order to anchor the scene, to sort of normalize it before it becomes abstracted, which is something we do often. And it happens a lot with sports references that are made in all the projects.

This is a kind of anchor, a place, mimicking sports cinematography, like NFL Films. Do you know NFL Films? NFL films are a real big influence of mine. It’s all 35-millimeter material shot on all the NFL teams. It’s a fleet of cinematographers that follow the different teams and then, I believe, that footage is sold to the different teams. Highlight tapes are made. And as a kid, we always had to watch these highlight tapes around lunch time at football camps and stuff. We’d go to different football camps at different universities and things, and there was always a sort of film hour or something like that, which would be sometime around a meal. And you’d sit there with a bunch of football players, and we’d watch highlight films from different NFL teams. But it’s great; it’s really great camera work, all that stuff.

ART21: So many of your interests are all-American in nature. How does this fit into your work?

BARNEY: Well, I think a lot of the references I make to American traditions—whether it’s athletics or a kind of car culture—I think those are things that I’ve certainly grown up with and understand. It makes those things very available to me to use, and I consider them as kinds of vessels. I don’t think that, by the time they’ve been hashed through the project, they’re representative of what they necessarily are in everyday life. They’re used as carriers, which is one of the reasons why the vehicles, in general, keep reappearing in the pieces—in that they are carriers, literally. The concept of a vehicle draws a line between locations, such as the Isle of Man and Budapest.

If there was a structure that was greater than the CREMASTER structure, it would have to be something like UPS—something that’s fleet-oriented, that would have air transport and a kind of local transport to really finish that line. You have a kind of consistent color in the way that UPS is brown and the logo is gold. I think that I have a need to make these sorts of connections literal sometimes, and a vehicle often helps to do that. So, in other words, that’s the way I would say I have a relationship to car culture. It isn’t really about loving cars. It’s sort of about needing them. ART21: You also make a lot of references to ancient myths.

BARNEY: Yes. Sometimes I take on stories quite directly, like with Drawing Restraint 7. That referred to Marsyas and Apollo. But it’s also about taking on a mythological structure and then imposing an internal logic on it. Like, if you were inside the stomach and esophagus, you’d probably say that same thing about somebody throwing up. You’d say, “Wow, the stomach is heroic for getting that mutant material out.” In other words, it is about taking a structure that’s mythological and putting it into a frame that’s more about something doing what it’s compelled to do, there to do. So, a lot of my work has to do with not allowing my characters to have an ego, in a way that the stomach doesn’t have an ego when it’s wanting to throw up. It just does it. But it could also be looked at from a heroic, mythological angle, for sure.

ART21: Do these films grow organically, one from the other?

Around that time, I started thinking about making a piece that would do that over a great distance, and that a drawing could be made on a map, and a single piece could be made involving these locations. So, these locations were selected ahead of time, and they follow more or less a single line of latitude from west to east. The individual stories were developed one by one, really, and were executed out of order. We started with CREMASTER 4, and as CREMASTER 4 was in development, some of the other stories started to fall into place. But it did happen organically that way: that we started the project without having the separate stories in place. The locations were in place, and a certain subtext that tied them together was in place, but the individual stories were not developed when we began.

For me, that’s to do with the fact that the stories themselves are somewhat interchangeable. In a sense they’re kinds of carriers. In other words, CREMASTER 2 could have had a couple of other stories other than Norman Mailer’s The Executioner’s Song to carry it. The Executioner’s Song was its carrier, in that the Rocky Mountains were the real story. ART21: Do you have a conscious system in mind before you start to write your script?

BARNEY: In the interest of creating a system that has an internal logic, I think there are points in the story where biological systems are referred to or used as art direction in a certain way. I’ve always thought of the project as a sort of sexually driven digestive system, that it was a consumer and a producer of matter. And it is desire driven, rather than driven by hunger or anything like that. It’s a desire in the sense of a kind of sexual desire. If that doesn’t answer the question at all, it does indicate that these are things I think about—that there is an interest in creating a kind of internal system. So, those sorts of biological systems are really useful to look at. Literal systems that exist have their own sets of logic and their own sorts of pressures and conflicts.

ART21: Could you talk about the character you’re playing at the Guggenheim Museum in CREMASTER 3?

BARNEY: That character at the Guggenheim is a sort of prosthetic manifestation of the Mason’s Apprentice, who is central to the rest of the story, really. The story has two principals, the Architect and the Mason’s Apprentice. The shift in the narrative occurs at the needle of the Chrysler Building in the form of a broadcast signal from the Guggenheim, televising this kind of game. The Guggenheim is a kind of flat space that’s not specific to any period; it has some of the feeling that video games have. And there are a number of characters in that game space that are manifestations from another part of the story. The Apprentice is one of them. The Architect, who’s played by Richard Serra, is shown sort of as himself in the game, throwing Vaseline on the top of Level Five. And he’s throwing hot Vaseline in exactly the same way that he threw hot lead in the late ’60s. Amy Mullins, whose role is the Moll, is a bit of a reflection of the Mason’s Apprentice. She appears in Level Three as three different characters. She keeps morphing as she attempts to eliminate the Mason’s Apprentice. To solve Level Three, her character has to be killed. ART21: Could you explain the significance of masons and Freemasonry in the story?

BARNEY: The story has primarily to do with the construction of the Chrysler tower. And, as the Architect is described, it starts overlapping with the mythology of the Freemasons. Hiram Abiff, the architect of Solomon’s Temple, is the martyr in Freemasonry, in that he was killed by corrupt stonemasons who worked beneath him. They believed he knew the name of God, and they wanted to be told the name of God. Hiram wouldn’t tell them, so he was killed by a plumb and a level to the temple and a maul to the forehead. So, CREMASTER 3 starts to fold into some of the mythologies of Freemasonry that way. Richard Serra’s character, the Architect, becomes like Hiram at a certain point. And the Chrysler tower is actually never completed, in the same way that the Temple of Solomon is never completed.