ART21: Is there an element of role-play or performance in the work?

DION: My work has a pretty complicated relationship to performance. Part of that is because there’s no traditional audience-performer relationship. But there is a Bouvard and Pécuchet element in my work: in a way, I’m working through the natural sciences as a dilettante. At the same time, I’m doing that in a very playful way to probe and question the trappings of authority. I’m examining the trappings of authority while, at the same time, I have some relationship at least to the history of the discipline itself.

I am very interested in the figure of the dilettante, the amateur. Amateurs have made great contributions in science, but now we live in a time when there’s such a radical degree of specialization that it’s very difficult for professionals in physics or biology to be able to communicate to a general public. Trying to be this character in between is fascinating. At the same time, I’m always suspicious of the way artists use science because science has such tremendous influence and authority in our culture. Whenever you encounter the kind of authority that seems unquestioned and unquestionable, you need to find ways to challenge it. One of the reasons for taking a play-acting approach is to create a situation in which people regard the trappings of authority with suspicion.

ART21: Are you to some degree suspicious of your own authority?

DION: It’s not that I’m suspicious of myself, but I want to create a situation in which the information I’m presenting is looked at critically—not taken for granted—and is examined with caution. There are people who read culture very cautiously and critically. That’s a healthy way to approach the information that we’re given every day. That’s one of the things I’m very engaged with in my work—trying to hone that skill in myself and, I hope, in people who look at my work. 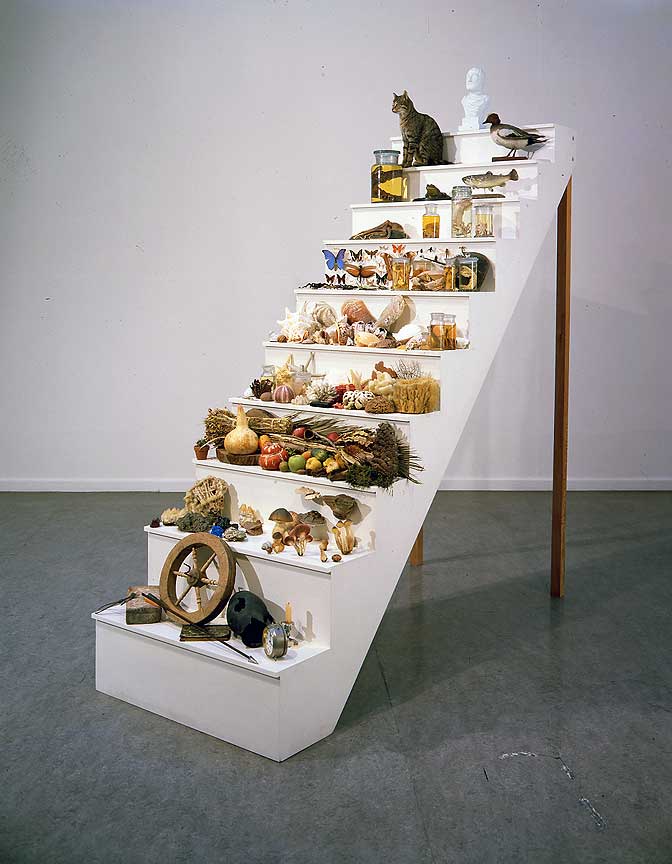 ART21: Can you say more about the amateur and the dilettante?

DION: People disparage the amateur and the dilettante. We see the dilettante as a very negative thing. But the history of the dilettante societies was exactly the opposite; they were really collections of learned people who were pooling their knowledge and resources together into clubs. And I think the amateur really has made tremendous contributions. One of the interesting things about the amateur is that they do what they do for themselves, and I think that’s really fascinating. I am primarily the first member of my own audience. My work is all focused on things I love and am most interested in.

One of the things about the amateur is that, even though something may not be new to science (like this particular bird they’re studying), it’s new to them. They’re able to experience the enthusiasm and excitement about discovery, which really drives scientific inquiry and artistic passion, as well. They’re able to make it their own in a way. So, I’m really interested in nerd culture. I’m interested in anyone who gets out of the house and away from the television and does something really exciting. Whether that’s stamp collecting, stone collecting, painting, or race driving—as long as it’s active and involves a kind of critical and intellectual inquiry. We’re very fortunate to live in a time where there are hundreds of thousands of birdwatchers and kayakers and kids trading cards—all these kinds of great things that people are passionate about. So, we’re not just overwhelmed by a tide of shoppers and television watchers.

ART21: How do viewers engage with your work? Do you feels it gets misunderstood?

DION: I think that a lot of people have engaged with my work in a serious way. I feel very satisfied with that to a broad extent. I think one of the misunderstandings is that my work is somehow this relativistic critique of science. And I don’t really think that’s the case. I mean, I think that you can be critical of the way something is [made instrumental] and at the same time still support the goals and motives of that field. Just because you are engaged with it in a critical way doesn’t throw the whole thing out. I have a relationship to science as an ever-evolving way of thinking. Of course, there are mistakes made, but I think that, in general, the goals of the scientific revolution and the Enlightenment are still worth pursuing. The movement away from superstition and tribalism is an incredibly important factor in the future of our relationship with the planet. ART21: What is the role of aesthetics in all of this?

DION: I think it’s important that the category of nature is not something the field of science has a monopoly on—that everyone has a say in what gets to be nature, at a particular time, for a particular group of people. In order to motivate people to care about the natural world around us, one of our chief tools is an aesthetic sensibility. And certainly environmentalism has an aesthetic. But I think we need to be guided by certain scientific principles and a conservation ethic as well. All of those things can come together to create a kind of relationship to the natural world that is productive and motivated by something other than profit. Profit can’t be the only thing that motivates our society. Otherwise, we’re really in trouble.

ART21: There seems to be a humorous quality in a lot of the work.

DION: The work is meant to be aggravating, in a sense. I’m not really trying to make anyone happy with this work. At the same time, it does hinge very much on humor. That’s a really critical component. Some of the things I’m talking about are very grim. And I think they’re very important. Sugarcoating them with a little bit of humor really helps; it’s definitely the spoonful of sugar that helps the medicine go down. And I think you’re really allowed to say more with humor. It takes away the arrogance. You have to be able to find a way to say it, that doesn’t put people off and isn’t alienating and arrogant. I think humor is that tool.

ART21: And humor is a tool that scientists probably wouldn’t use to talk about these same ideas.

DION: Even though I have a certain engagement with science, there are a lot of tools that the artist has that the scientist doesn’t. Humor, irony, metaphor—these are the bread and butter of artists. And I think that’s really what artists can add to a particular kind of struggle, that they have this expanded tool bag. We’re not necessarily obliged to tell the truth. We can make work that’s very playful. It doesn’t necessarily mean that you have to deceive people. You can foreground that deception and make that what the work is about.