ART21: What makes the role of being an artist so exciting?

GROSSE: I find it fascinating that as an artist, especially as a painter, I do something that is not being processed through the media or through a machine but that is directly traceable to me as the author. I have the responsibility of what is seen and can make decisions based on that responsibility.

ART21: How do you understand this responsibility? There are many artists who are involved with social and political actions…

GROSSE: I’ve become dubious about the idea that art might only have relevance if it touches upon the political impact that we have, as individuals, on society. I find that art is often misused. There are so many ways that we interact, which might have more than political impact. I believe there are many reasons why we are here that may be of a spiritual nature. I just like to see something totally amazing in painting; that’s why I do this. Katharina Grosse in the studio. Production still from the Art in the Twenty-First Century Season 7 episode, Fiction. © Art21, Inc. 2014.

ART21: When did you begin to paint?

GROSSE: I was painting as a little kid, early on. It was natural to paint things. But I wasn’t the kind of kid who would get an oil-paint kit from her grandmother and all of a sudden paint self-portraits. I just loved to make things. I remember we would go into the woods, close to our house, and do stuff there. I would come up with ideas, like constructing a hammock and pretending that I knew how it worked. I didn’t, but I orchestrated all the kids in peeling off bark from trees, and we would interweave the bark, hoist it up on trees, and make these land-art things from it.

I asked myself: How could a painting be shown in a space, and why do paintings always follow the given walls?

The rural area where I grew up has a history of the Informel [art movement]. One figure I already knew about when I was a little kid was Emil Schumacher, who made huge gestural Informel paintings. My teacher for my first lessons in painting came from that tradition.

ART21: Which teachers or artists really interested you, during your studies?

GROSSE: I spent a long time studying. I began to study in a small art school in Münster, which is in northern Germany and is known for the Münster Sculpture Project. I was very inspired by my teacher Norbert Tadeusz, who was a colorful figurative and narrative painter and used raw colors, like yellows and blues and reds. I always have had a fascination with the unmixed palette. Tadeusz introduced me to Renaissance painting, and I began to look at originals in the big museums in Europe and wall paintings in Rome and Naples. He would not teach me anything about conceptual art, so I would only think about the work while making it. Later, I came to find this a deficit, but it didn’t occur to me as a student that there could be something else than making the work. Katharina Grosse in the studio. Production still from the Art in the Twenty-First Century Season 7 episode, Fiction. © Art21, Inc. 2014.

ART21: Why did you feel that this approach had a deficit?

GROSSE: I think the teaching of theory in the German art schools was neglected in those days. Compared to English or American schools, German schools did not implement theoretical training and thinking as strongly. I began to understand this when I was studying at the Düsseldorf Art Academy. I grew up in an era when painting came back [in fashion], just before photography became so strong with the school of Bernd and Hilla Becher. There was a wave of figurative paintings, labeled “wild new painting,” that was clearly a movement against the minimalist theories of the 1960s and ’70s. The idea was to be in the medium and to not reflect on it, in the sense that one reads, talks, and thinks about theory. The Courbet quote, “silly as a painter,” is taken out of context—I later understood that Courbet was a very conceptual person—but my teachers always confronted me with that saying. I couldn’t make sense of it because I felt that I had so many talents that I couldn’t use when doing my work. That’s when I started to develop a different take on my system and on how to make my work.

Could painting behave differently in the given space? And it dawned upon me that the painting could sit anywhere.

ART21: You mentioned that Courbet was a very conceptual person. What do you mean by the term conceptual?

GROSSE: That’s a very good question. The faculty at my first art school included a German conceptual artist, Reiner Ruthenbeck. He was one of the first people to point to the big step that artists took after the war: You can make a concept—like a cross with this kind of red and that kind of blue, painted on the wall this big—and you can send it to the United States, and Leo Castelli can have this piece executed on the gallery wall. You don’t have to make the work, yourself; you can think about and design it, write it down, and have it made by somebody else. In those days, that was an unusual thought in Germany, and not many people would start to think that way.

But the term concept also has another notion, of course, which means that you project a strategy that could make you act. That activity, then, allows you to explore the strategy and maybe make it produce something that has visually nothing to do with strategic thinking but that internally follows the strategic thinking. ART21: Is that why you moved away from doing works that were flat and began moving into space and working with three-dimensional forms?

GROSSE: Yeah, that is exactly why I started to use other surfaces than just the canvas and its relationship with a wall. I asked myself: How could a painting be shown in a space, and why do paintings always follow the given walls? Could painting be shown in a different way, other than affirming or reaffirming the functions that walls have in a space? Could painting behave differently in the given space? And it dawned upon me that the painting could sit anywhere. It could sit up in a corner. It is as fluid as a film, as something that can sit everywhere and that has no site.

I was inspired by the Abstract Expressionist [paintings] less for their gesture and more for the questions [they raise].

ART21: What do you mean by site? Traditionally, paintings are not site-related unless they were commissioned for a specific space. ART21: A number of Abstract Expressionist painters were involved in gesture. Were you interested in them?

GROSSE: There was a time when I was very interested in the gestural painting of the Abstract Expressionists. However, I always saw them in relationship to the history of European paintings. For example, I found the vast expansive flower paintings by Monet are very related to [paintings by] Pollock. When I began to study art, I saw a huge Pollock show in Paris. There were many paintings I had never seen in the flesh. On the same trip, I also saw Bonnards and the early Matisses in person for the first time. I realized that I loved them all and saw them on the same level: the early Matisse paintings, with the thick orange and red and little blue dots, were just like the Pollock paintings that show the canvas and the drips. I was inspired by the Abstract Expressionist [paintings] less for their gesture and more for the questions [they raise]: How does the color or the paint sit on the canvas? And what kind of information does it give to you? 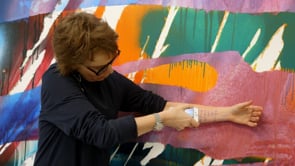