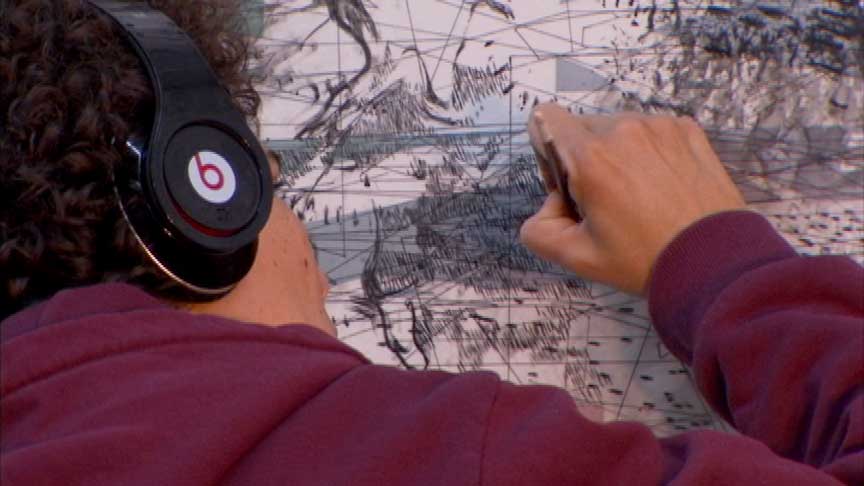 art21: How much does the viewer need to know? How much of the underpinnings do you wish to reveal?

Mehretu: There are different types of information that go into the picture, depending on the painting, and especially in the work now. In certain paintings that information is very readable and it’s just pure geometry—geometric shapes that mimic architecture. So you look at the structure and you can’t really define anything, but you know that it’s really just created out of geometric shapes. Then there’s other work in which I incorporate a lot of specific architectural plans. As the works progress, the more the information is layered in a way that’s hard to decipher what is what. And that’s intentional. It’s almost like a screening out, creating a kind of skin or layer of just this information that we recognize. So if a building is from Baghdad or New York or Cairo is not so important. I don’t necessarily reveal which building is from which place. It’s more that this information is part of the DNA (that’s how I keep thinking about it) of the painting—part of the ancestral makeup of what it is and the information that informs your understanding or your vision of it.

I’m attracted to images, different types of images, and usually that’s because of what’s going on in the world. And because I used to work with this information more directly, I think I’ve become much more well-versed in the language of architecture. So all of that comes into the work in different ways, but I don’t really spell out exactly that this is, for example, an image from Baghdad. This painting is not a description. I want the work to be felt as much as read. art21: Architectural structures or other things that people build are your landscape? Let’s say, as J.M.W Turner’s landscape was the sea.

Mehretu: But even still it was atmosphere for Turner. I’m very interested in looking at Turner right now. The seascape was his point of reference, and even when he was trying to paint historical scenes around that it was the sky and the atmosphere that he was painting. Being able to paint forces of this kind coming together and that you can’t quite grasp in some way is his majesty. But, with my work, it’s the architecture and the space and the built environment that become a kind of palimpsest, another type of atmosphere. The buildings are so layered; the information can be so layered and disintegrated that it becomes a dust-like atmosphere. art21: Tell me about the watercolors that most closely relate to the work you’re doing now.

Mehretu: The last time I was in Berlin, which was in January of 2007, I was working on a bunch of watercolors. There was a phenomenon happening that I wanted to bring into the painting. As I started to work with that element and bring it into one painting, for its different references it was just not working. I kept pushing the color into this painting where there had been an intense amount of drawing and an intense action between all the different marks. At one point, I just started to sand away all the color that came into the work. And when I’d finished sanding it, I turned around and looked at it and it was a finished painting. I called it this poltergeist in the work. The erasure itself became the action. And all the marks were frozen around this hovering. It reminded me of the caves in Afghanistan where the Taliban removed the Buddhas—that image of their absence. There was almost that type of feeling to the area in the painting and what happened in the work. It became the dragon that I really started to chase with the rest of this work since then, thinking about excavation, erasure, and palimpsest within my own language and my own work. It seemed to me to suggest a moment in terms of how sad or pessimistic you can feel in a political environment or a historical situation. But it felt like a really hopeful gesture in the painting.

art21: Explain “hopeful,” because when you talked about erasure and this historical moment, I was thinking the reverse.

Mehretu: I went to see the Babylon show at the Pergamon here in Berlin and there was a deep description about the history of Babylon, the number of wars, and the number of times a certain type of history has been erased. One has a strong sense of responsibility in the Iraq war—being an American citizen and being an active agent in a time of really horrible war—especially in these very ancient places that are part of our collective history as human beings. The blatant, haphazard wiping out of part of that history can be very depressing. The other side of it is that things will continue and there is a different kind of growth that can come again and that things evolve. Looking at these things simultaneously—seeing these two powers challenge each other in the work—time and space are collapsed. art21: There’s something about the layering and transparency that allows you to see this. The eyes go back and forth, and through the layers one is able to almost move in time or move in space.

Mehretu: Yes, you can go back 2000 years and come right back. The reason that I was working earlier with transparency and layering was more analytic, in an effort to layer these things one on top of the other. Now there’s a little more understanding of the information. I’m actually building in a way where you can’t as easily see through the layers and decipher what is what. It doesn’t matter how much an expert you are in architectural history. It’s hard to pick out what is what if everything becomes so congested. And part of that is the intention of everything just distilling—allowing everything to break up into pieces of dust, vapor, or more atmosphere.

art21: I see a lot of different references to abstraction. Turner was somebody you looked to for one kind of imagery or feeling. Are there other artists who attempted abstraction and whose work you admire?

Mehretu: There are different types of work that have informed mine, in terms of how it’s made and what it may be quoting. But if you think of an abstractionist who really tried to deal with the social, it’s [Wassily] Kandinsky. Or think of the desire of the great utopians that nothing was without meaning. There’s a very clear relationship between my work and the history of that work, or the Constructivists or Italian Futurists in certain ways. But in terms of what interests me in paintings, I can go after a painter—one part of a person’s painting—and not necessarily his or her whole work. I am interested in the history of painting. While I like many artists, my favorites are not necessarily painters—or they tend not to be painters who are the strongest contemporary artists. But I’m working with the history and tradition of painting, and that’s been a consideration of mine since I started really making conscious art. I’m a painter; and that’s what I’m obsessed with.

What I’m really focused on and trying to go after in my work is not necessarily being informed by other artists’ work. It’s about trying to understand myself. I keep going back to that, digging deeper into who I am. You have all this experience that determines who you are, and you can’t change that too much. You know you can only get to know yourself better, understand yourself better, and evolve and try to grow. That’s how I am with my work—trying to push and understand what I make and why I make it the way that I do. Why the fascination with certain materials?