ART21: How did the Mobile Matrix (2006) project for the José Vasconcelos Library in Mexico City come about?

OROZCO: The new building for the library was a major project for the National Institute of Fine Arts and the Ministry of Culture in Mexico. They thought it would be great to have something in the building like an artwork. They called me and I told them I would like to see the building, but I would wait until the construction was a bit more advanced and then see if I get an idea that I think could work.

When they held a competition to make this building, it was all over the newspapers and it was a strong competition. I met with the architect that won the competition, Alberto Kalach, who I didn’t know before. He’s a well-known architect in Mexico, just a little bit older than my generation. We’ve since become good friends.

When the building was finally ready, I went. And when I was there, walking in, I liked it very much. It’s an interesting, open space with all these hanging bookshelves. It’s quite an impressive, monumental library. I had a couple of ideas, and one of these ideas was to have the skeleton of a whale in the center. Somehow it was more like an image than an idea. It came to me like a very clear image of this floating whale in the center of the bookshelves and the library. So that’s what I proposed.

Everybody loved it from the beginning. But whales are protected, right? There isn’t a way you can buy a whale skeleton. You have to either get a copy—a cast, a reproduction—or nothing. There isn’t a market for whale skeletons, at least in Mexico. It’s forbidden. But the fact that this is a national library belonging to the government, it makes it easier because I could just borrow the skeleton from our coastline. It became like an act of preservation, to put it in the hands of the library that belongs to all Mexicans, to the people. ART21: What was the process of excavating the skeleton like?

OROZCO: When the project was approved, I didn’t have that much time to complete it before the building was finished. So I put together a team. I called a friend who was the director of the Museum of Natural History in Mexico and I said, “I need a whale skeleton. Do you think we can get one? How do we do it?” And he said, “Okay…let me make some phone calls.”

Because we were working for the Ministry of Culture, it was easy to get access to some government offices. We called the director of the National Park in Baja California, which is one of the three major national parks in Mexico. It’s a sanctuary for whales, which is why it’s one of the most famous. We traveled there, my friend from the museum and I, in a team of six. We arrived at a village, and from there we had to take a boat to the beach. There was absolutely nothing there but thirty-five kilometers of sand dunes. It was almost like a science fiction trip because we were on these motorcycles, riding in the dunes, looking for skeletons in this amazing landscape.

We needed a skeleton that was not that old, because when it gets old the skin starts to disappear and the bones disperse. We needed a two-year old skeleton. Finally, we got the one we thought was the best and we started to excavate. We had to number every single piece and create a registration system. When we had all the pieces excavated, we knew that there were some missing, but it was quite a complete skeleton. We put it in bags and took it inland a little bit, away from the shore, because the weather could change at any moment. It was quite exciting because it was in-between archeology and…I don’t know the word in English, but when you take a body out from the tomb…an exhumation.

The whale skeleton was sent to us in Mexico City. There, with the help of a specialist from the Museum of Anthropology, we cleaned up all the bones and made all the preparations for its preservation. It was quite a process to ready a very clean skeleton. We knew that it was a female whale that died quite young. We could even determine the year that it was killed. We discovered that it probably died from an accident, like it hit a boat or something, because part of the head was a bit damaged. And one of the hands — whales have fingers, it’s very nice — it was missing. So we reproduced the left hand. We made a copy of the right hand and we put it on the other side.

After that, I put together a team of twenty people and we made the drawing together. It was a very intense process and very monumental, in a way, because everything was big. For example, to put the skeleton together we had to work in the lobby of a train station next to the library. I had an architect design the metal structure that joins all the bones into one piece. I had to make decisions along the way, for example, the position of the whale. You can make the whale more dynamic, or more straight, or diving in or diving out. There were many different possible positions and we needed to choose the right one. There were details in terms of the aesthetic — the metal structure, the screws — everything was custom made. This big space, putting together these big pieces, working hard for two months, making this drawing…it was quite a process. Thankfully I had a very good team; it’s important to put together the right team for the job. ART21: What were you trying to express with the drawing in graphite?

OROZCO: What I decided to express in the drawing was the structure of this machine, how the forms of these bones are related to the movement and functionality of this structure. I chose some points of movement in the whale, and with very big compasses, started to draw circles. The whole drawing was designed with these compasses. I like graphite and bone together. I did that with the human skull in Black Kites (1997). Somehow it doesn’t feel artificial; it feels like they are just two materials together.

There’s always a structure that is somehow functioning or working in an object. In Black Kites, if you see it in profile, there is a center there that generates a kind of grid. The top of Black Kites is very much like a checkerboard. It’s very even. Only in the eyes does it starts to get a bit chaotic and you feel some depth. The drawing on the whale is based on this tri-dimensional object that has different points that generate the reason for this structure to have that specific design. I was locating those points, and then from that making a bi-dimensional grid. There are five grids, interconnected. It’s a bi-dimensional gesture applied to a tri-dimensional body.

It’s so complex that if you have a bi-dimensional graphic or drawing of a skeleton and then try to map out what you intend to do it…it’s impossible. When you start to draw on the real skeleton, it’s very complex and it’s amazing how even if you are working with rulers and compasses and mechanical instruments, they behave in surprising ways to create the drawing. You have to really be there and make the drawing on the piece. You cannot prepare so much beforehand. So that is nice…the process of drawing is like an exploration of the whole object.

ART21: What was the reaction to the piece, after it was installed in the library?

It’s like the Statue of Liberty. People think it’s really big, because you see it in the movies and all that. But when you arrive, it’s actually quite small and not that big. So that’s why some people thought that it was not that big. I knew the size of the building, and I knew the size of the whale, and it was going to look fine for me. I guess in people’s imagination, they thought it was going to be much bigger. But in general, I think people really love it and the whole thing works very well. ART21: Afterwards, you made a second version of the whale titled Dark Wave (2006). Was the process for creating that piece similar to Mobile Matrix?

OROZCO: It was actually very different. Somehow I thought that it was a good idea to have a second version that could travel. Mobile Matrix cannot travel because it’s a real whale and because it’s permanently going to be there in the library. Dark Wave is a cast; it’s not a real whale, it was made in Spain. It’s a blue whale, a rorqual. Mobile Matrix is a gray whale, so it’s slightly different. I decided to do the inverse in terms of drawing, so it’s like a negative—it’s more dark than light. It’s a kind of mirror image of the original.

On the whole it was a very different project because I didn’t go out on a hunt for the skeleton. It was already in a museum in Huelva, in the south of Spain. A workshop made the cast from a mold of the original skeleton. So when I arrived the reproduction was already there, ready for me to make the drawing. I put together a team of fifteen people and we worked there for a month. It was faster because we already had the experience. But the drawing is not the same and there are variations. In both whales, the drawing is not a decoration. The drawing is a description of movement and of the tri-dimensionality of the structure. The drawing works as a description of the functionality of the object. It’s a kind of functional drawing.

Also, the different contexts where the two works are shown is very important. For example, Mobile Matrix was made for that particular library. It’s the national library. It’s like the New York Public Library. It’s public and noisy and there are bookshelves. It’s a side piece; it’s not the main objective to go to the library. You don’t go to see the whale, you go to look for books and then you see a whale. Dark Wave is meant to be shown in a white cube, like a gallery, where it’s quiet. You go to see that whale, it’s the focus. And that’s what a good gallery does: it lets you really focus on the work. You don’t focus on how big the gallery is or how luxurious everything is around you. A good gallery, a good museum, shows off the work. And then, the difficulty, is that it’s not easy to translate something from real life into a white cube space. 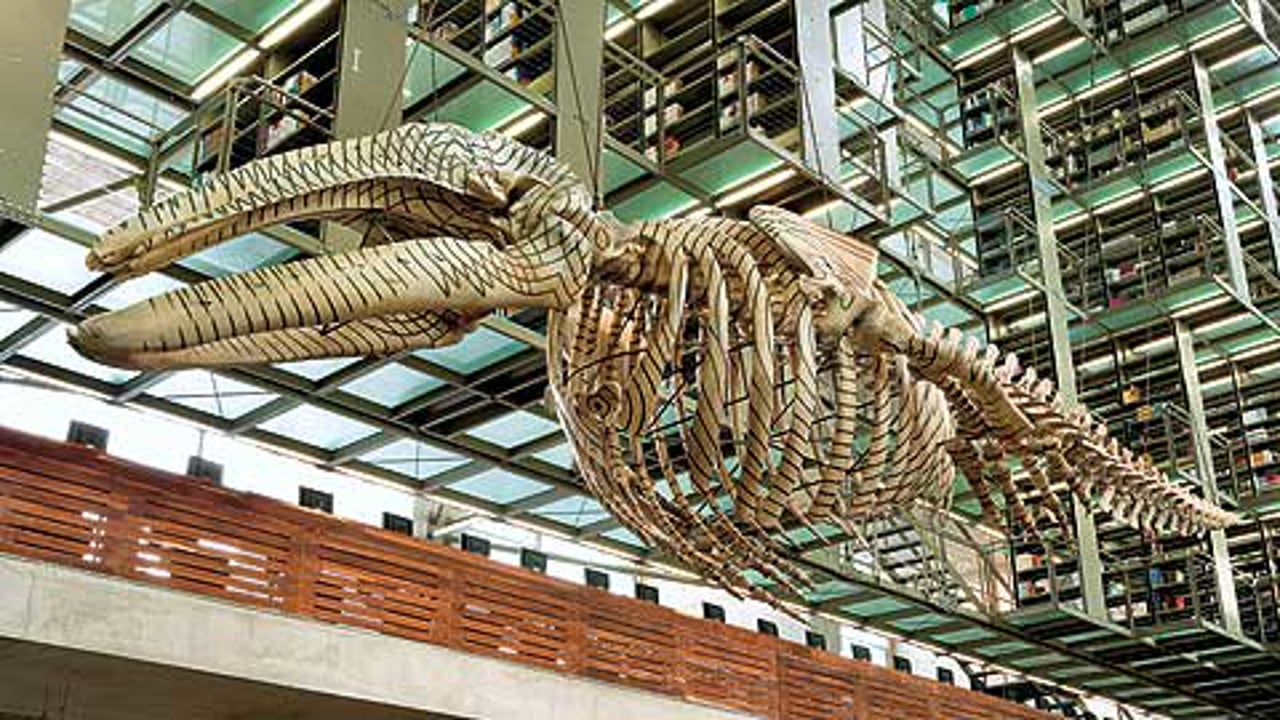