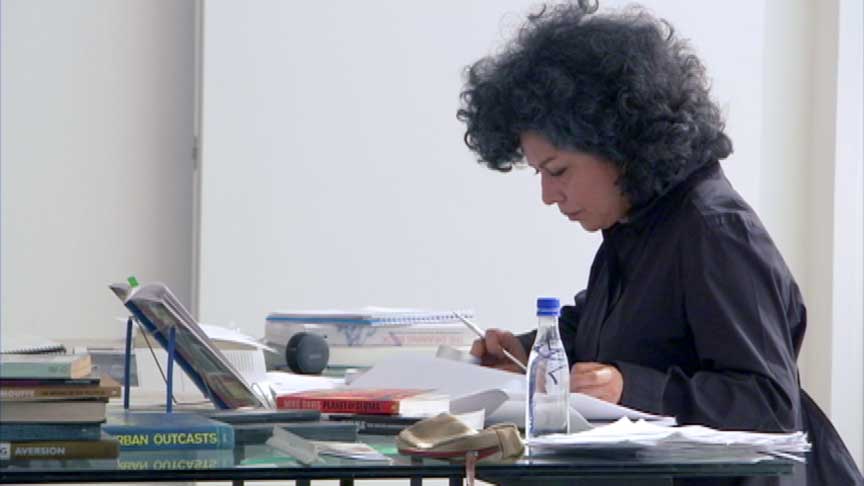 ART21: I’m curious how early on your political sensitivity was formed and when you connected that to the notion of being an artist. Looking back, when do you think you started to connect these things?

SALCEDO: I always wanted to be an artist. I cannot name a date when that came to me; it has always been there. Living in Colombia, in a country at war, means that war does not give you the possibility of distance. War engulfs reality completely. In some cases, people can be killed or wounded at war, but in most cases war just distorts your life. It throws a shadow over your entire life. War creates a totality and you are embedded in it. It’s like being engulfed in a reality. Political events are part of everyday life here, so art and politics came to me as a natural thing, something that has been very much present in my life from the start.

ART21: Explain a little bit more about war. I suspect for people living in the United States, they think about war as being something where two countries are fighting each other, and war here in Colombia it has a slightly different aspect.

SALCEDO: I think war everywhere has a different aspect now, because I don’t think war is waged between two nations any longer, or not the main war. I think war is waged at different levels. And those levels that are subtler are the ones that really destroy the life of a big section of the population. I believe war is the main event of our time. War is what defines our lives. And it creates its own laws. War forces us to generate some ethical codes in which we exclude a whole part of the population; once they do not fit into in our ethical code, then we can attack them and destroy them because they are not “human.” So it’s a tool to expel people from humankind. I think that’s the main event, and that’s why it worries me so much. You see that there are civil wars going on everywhere on a daily basis. You are reading about these events and these events are really shaping the way in which we live. That’s what I’m trying to show in my work—that war is part of or our everyday life.

ART21: How does this political thinking become embedded in a work of art?

SALCEDO: Well, my work is based not on my experience but on somebody else’s experience. I would like to reflect a little bit on the etymology of the word “experience”: it comes from the Latin word experiri, which means “to test” or “to prove,” and from the Latin word periri, which means “peril” and “danger,” and also from the Indo-European root per, which means “going across.” So experience means “going across danger.” So my work is about somebody else’s experience, literally defined. That’s where you get the connection with political violence, that’s where you get the connection with war. And that’s what really interests me.

I have focused all my work on political violence, on forceful displacement, on war, on all these events but not on the large event. I focus on the small, individual, particular experience of a human being. I’m trying to extract that and put it in the work. The memories of anonymous victims are always being obliterated. I’m trying to rescue that memory, if it could be possible. But of course I don’t succeed.

My work lives at the point where the political aspect of these experiences is appearing and disappearing. We are forgetting these memories continuously. That’s why my work does not represent something; it’s simply a hint of something. It is trying to bring into our presence something that is no longer here, so it is subtle.

ART21: What kind of research are you doing now?

SALCEDO: Well, I think I have been doing the same research for many, many years with small variations. For years I kept files on concentration camps, both historical ones and contemporary ones. What interests me is how it varies. It’s always there, but it presents itself in different forms. I was amazed when Guantanamo was opened in Cuba, because Cuba was the first place that had a concentration camp. Actually it was a Spanish invention. A Spanish general, Martinez Campos, thought it up in 1896. At that time they implemented it in Cuba. It’s amazing to see how it has come full circle. Now you have Guantanamo again in Cuba. But of course the British had it at the end of the nineteenth century in South Africa. Then the Germans had it in West Africa. Then you have killing fields, forced labor camps, gulags—the list is endless.

I have come to the conclusion that the industrial prison system in the United States has many of these elements, where people, for really no reason, for possession of marijuana or things like that are going to jail, where some minor crimes have become felonies. I’m really shocked by the sheer numbers of people being thrown into jails. And also I think it’s amazing how this system, being in jail and then going out, has so many collateral effects that a fairly large portion of the population are not allowed to be alive. Most of my pieces lately are related to this issue. There is Neither (2004), where I was thinking directly about Guantanamo, and Abyss (2005), where I had been thinking of what it means to be a contemporary slave, and this notion of confinement, to put people within an area where “everything is possible,” as Hannah Arendt said. It’s really my main focus of interest. But also what interests me is why we allow that to happen? What kind of society allows those events to take place and in such a consistent manner? That’s what is really important, what is the political structure that allows that to happen, that we can do that to such a large portion of the population? That’s what I think about while I’m doing my work.

ART21: In this research you’re doing now, what kinds of things are you discovering? Talk a little bit more specifically about some of the discoveries you’ve made in your research, some of the factual information.

SALCEDO: More than the factual information that I have discovered in this research, what I like to think about is, let’s say, “we the people.” What does it mean, “we the people”? Who is included in that “we the people”? We know that when the Constitution was written, slaves, poor people, women, and Native American Indians were not included. Now when somebody says, “we the people,” who are they thinking about?

There is a fragment of the population that is on the borders of life, on the edges of life, on the epicenter of catastrophe, and I would like to focus on them. How do they live? I would like to find out how they can live in such conditions without being able to find a job, without being able to vote, losing their civil rights? So I try to follow people, I try to make my work based on real testimonies of real people. I try to follow their steps and trajectories, know their family, know as much as I can to try to find and to build a complete life, in whatever situation. No matter how small the identity we try to impose on somebody else, I think that person will always be able to overcome that and be more than that identity.

When we’re talking about the underclass, we have to know that that is a myth that is very useful to control a certain population. But at the same time, people that are there under that horrible identity, they are able to be more, they can be more. They can grow beyond the totality that is imposed on them. And I think art can do that—it can show the splendor of a complete life. I would like to show both sides: a complete life under whatever circumstances, and on the other hand, the circumstances and conditions in which we force some people to live. I would like to mix both things. I think art has the ability to connect everything; to connect both worlds and create an image that hopefully is richer than the stereotype or the myth or whatever. ART21: I understand that part of your research involves talking with people, its not just found in books or statistics.

SALCEDO: For many years I’ve been talking to victims of violence. I used to travel to war zones in Colombia and interview people. After terrible events took place, I would go to the sites and interview people and gather objects. And my work was built based on the words that the witnesses told me. I used to think of myself as a secondary witness and I continued doing that. Nowadays, I try to interview people. The difference in the research that I’m currently doing is that I am no longer dealing with victims that are just victims, I’m dealing with victims that are perpetrators as well. So in that sense the research is more complex now. I guess it is essential to know that the artist is not making up things. I think as an artist I have a responsibility. I have to look at historical events and work with whatever material is given to me. I don’t work based on imagination or fiction. ART21: What do you mean by the material that they, the victims, give you?

SALCEDO: The experiences they have gone through, the experiences that shape our world. I’m taking those, I’m working, and I’m trying to understand this reality, trying to make sense out of brutal acts, if that is possible. I know that seems vain but I try.

We know in the Third World that rationality does not fix every problem. In the Third World we see things in a different way. So you have to make your life out of chaos. You have to organize your life out of disorder and that’s why I’m working on this chaos. I’m working on this pain. I’m making work out of war, out of the most chaotic and most extreme situations.

ART21: In something I read you talked about order or some aspect of order. Is there some, maybe subliminal, attempt to order this chaos?

SALCEDO: I don’t think I can. My work is a vain attempt to bring some sense, to try and understand what is happening. I want to emphasize the word vain because I don’t think art has the possibility of aesthetic redemption. But on the other hand, I think we have to try. Giorgio Agamben has a beautiful quote: “When the subject gives account of his own ruin, life subsists, maybe in the infamy in which it existed, but it subsists.” I think that’s our task, to make that subsist, not to allow that to be forgotten, to bring that to our present tense.