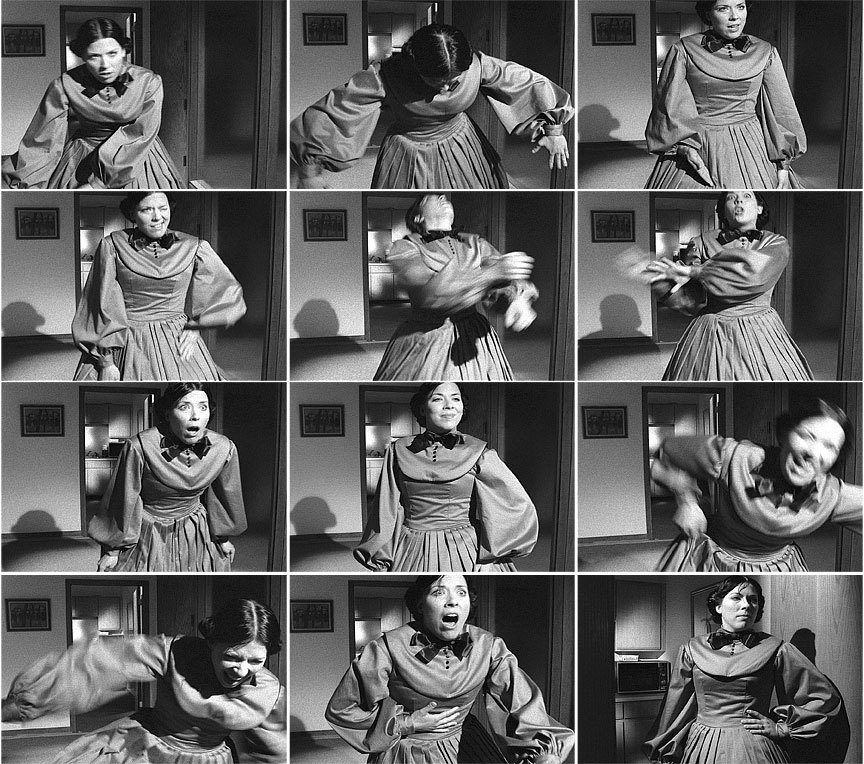 ART21: What are the rehearsals for your videos like?

SULLIVAN: It’s often the case that the actors and performers are donating their time. So, part of what that means is that I’m often not sure of who’s going to be at rehearsal. And because I’m not sure, it’s a question of what can be a stable series of elements that I can count on. I’ve had to conceive of things in a way where the choreography, the movement, everything is very developed and rehearsed, but it’s open enough that it can be recombined once it actually gets staged into the setting. In a nice way, it has provided a condition where I can refine things in individual performances. But at the same time, there can be some spontaneous element that everyone is prepared to deal with in advance.

ART21: When you’re referencing a film or historical event in one of your works, would you say that those references are providing you with inspiration?

SULLIVAN: I’ve thought a lot about the degree to which the inspiration of the work comes through the privilege of being able to consume information. In some way, I try to honor that privilege by saying that I operate in a world of choice. For me, politics is a choice. I don’t live in a world where I’m forced to align myself ideologically with a particular regime, or think on a daily basis about where my soap is coming from. So, engagement with these issues is a choice. And my choice is to reveal that freedom and privilege to think about certain things without having to suffer their consequences. My imagination can bring together a lot of very painful things and a consideration of different kinds of consequences. I’ve thought a lot, as an artist, about what it means to operate with any information I want, and with the privilege of using that information in any way I want. If I were to make a different choice, then I would be a journalist. But I’m an artist; I’m interested in these things in an artistic sense. The end result is art. ART21: Can you point to this sense of political engagement in the work, as a concrete example?

SULLIVAN: When Bush was re-elected, I was working on the movement sequences for The Chittendens. I was so disgusted with the political situation that I started reading Thorstein Veblen’s The Theory of the Leisure Class. That book framed, for me, a lot of the pathology that was very familiar, having lived with this regime. The process of the piece was to build a mise-en-scène in which the characters were modeled after twentieth-century-middle-management and nineteenth-century-leisure-class archetypes.

I started to look at certain things that were symbolic or visual motifs within their milieu. One of those things was the lighthouse, which is often used in ads for insurance agencies, banks, and mortgage brokers as a symbol of stability in American business culture, and another was the office or corporate headquarters. And I started thinking about these in terms of a mise-en-scène for the work, and that they could be useful as places for these regimented choreographies to happen. I had actually seen the name “The Chittendens” and the lighthouse symbol on a sign for an insurance agency in Phoenix, Arizona. And, ironically enough, one scene was shot at an abandoned lighthouse on Poverty Island, off the coast of Wisconsin.

The performers’ movements are not alienating, in and of themselves. It’s what happens to those movements once they’re in the environment of a particular regime. It is to the regime that judgment is to be directed, versus judgment being directed at the individuals within it. And that’s been something of a misunderstanding within the work. It’s not that I want anyone to look at the actors succeeding or failing within this situation. It’s more that any judgment is to be directed at the situation that asks them to behave and perform in this way. So, there’s a place in the work where automation and mechanization is like a kernel of mindlessness. It’s meant to be frightening because it’s arbitrary—because you can’t understand why. A fundamental principle of the way the regime operates is by giving no explanation for itself.

ART21: Do you see contemporary American political leadership as a kind of regime?

SULLIVAN: Well, you know, the frightening thing is that, of course, I have choice. And, of course, I have privilege. But I live in no less an oppressive regime, ideologically. I have certain material conditions, which I live with and which allow me to sit at my desk and analyze while well-fed and warm.

ART21: Is beauty something you think about when making the work?

SULLIVAN: I don’t think beauty has a presence in the work. But I see no reason to do away with beauty. I mean, is this a discussion about beauty’s place in art, or beauty’s place in thinking politically about one’s art? Is this beauty as a kind of aesthetic politic? Is this beauty as something that can be interpreted in terms of its use value to people in general? Or artists? Or my work?

I think I certainly allow my eyes pleasure. I allow myself to take pleasure in a phrase of speech or a kind of movement that I find visually compelling. But generally speaking, beauty isn’t directly relevant to an aesthetic politic. There are things that are enjoyable and pleasurable, and there are also things that are not so pleasurable. I think, in terms of the work itself, if we talk about beauty, I would always advocate some kind of dialectic. Beauty operates in a dialectical relationship to other things—to express contingency and non-exclusivity and, hopefully, transcendence. Those kinds of politics, which are aesthetic politics, are not as important to me, I would say. ART21: You are very thoughtful of the relationship that exists between the work and the viewer.

SULLIVAN: I think it’s a very high-stakes game, this relationship of interaction between the artwork and its audience. I conceive of that in a larger system—let’s just call it public address. The issue, for me, is often that there’s one way of thinking that has to do with the way an artwork addresses the public—very honestly, directly, and objectively, and often in a very reduced way (a purging of artifice)—so as to get at a kind of directness of engagement. I interpret that as the formulation of some kind of agenda, which in some way regards artifice as highly suspicious, questionable, or dangerous—as if there’s a pretense that it somehow confuses the relationship between the artwork and the audience.

So, my question is: What is it about this engagement, to begin with, that raises fears that generate this sense of danger? Why is it, if someone is speaking to you from the stage directly, that maybe conditions are such that they might put you at ease—whereas if someone is wearing a costume and playing a scene where they cry, there is a kind of suspense that makes you uneasy? Pretense or artifice simply raises the stakes to such a level that it activates what is perhaps dangerous or unstable about that relationship to begin with. So, I feel that that’s a deeper human issue of empathy—a kind of innate sense of, or capacity for, empathy that one person feels for the other—that a dramatic situation elevates. I think it’s a very abstract, basic human identification that theater, or any performative medium, activates.

My work has to do, to a large extent, with the nature of public address and public assembly, as a way to get at something about social engagement, which is abstract and doesn’t have to do with speech but rather with the combination of a lot of different phenomena. It has often been discussed in terms of body language or gesture. I think it’s actually a much more complicated series of issues. But it all boils down to public assembly, public address, public engagement, and interlocution.