In this rare interview conducted in December 2017, Barbara Kruger shares her media diet, what she sees as art’s role in contemporary society, and the inspiration behind two of her earliest works.

ART21: Your early works have stood the test of time and continue to resonate. Could you discuss the impetus for the work that is my favorite from the early ’80s, Untitled (You construct intricate rituals, which allow you to touch the skin of other men)?

KRUGER: It has to do with the notion of a comfort or discomfort with sameness and difference and that sports, for instance, is a way that men can be allowed to have physical contact that is disallowed in a homophobic culture—not only in the playing of the game but also in the viewing of the game. Sports promote a kind of romance or a group understanding and intimacy about the notion of teams, about men being together and men’s bodies being together. It’s also true of the military, and it’s true of cultures in certain countries that disallow difference and are homophobic and at the same time are engaged in a war for a world without women.

Now, of course, things are different because gender binaries have changed so dramatically in the past ten years, problematizing the assignment of gender itself—which in many ways, for many lives, has been very productive and emancipatory. 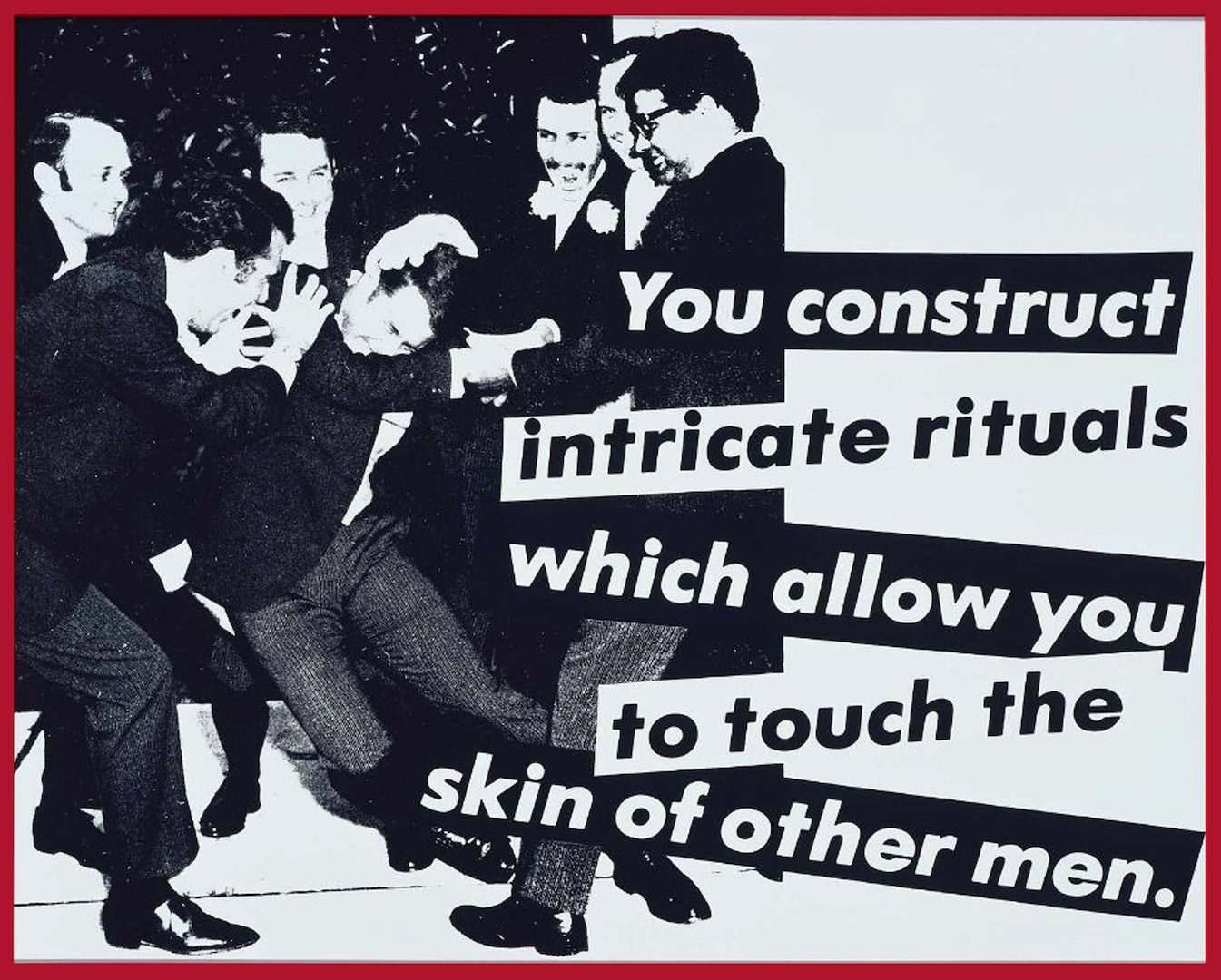 ART21: You’re often discussed in the context of feminism. How do you define your relationship to that movement?

KRUGER: Well, of course I’m a feminist, but I speak about feminism as a plural. There are feminisms, and those feminisms are acted out in terms of site specificity: context, race, class, gender, location. They also connect with a larger term, intersectionality, which is commonly used now but which I’ve always understood organically.

“There is always a connection between issues of race and gender and class…It’s wrong to trivialize any one of those things at the price of the other.”

There is always a connection between issues of race and gender and class. They don’t ever exist separately, and people who feel that they live them separately are really not understanding the multiple forces that have impacts on their identity and their lives. You just can’t talk about sexuality and gender without engaging the complicated issues of race, and you can’t talk about race without engaging complicated, under-recognized issues of class. And it’s wrong to trivialize any one of those things at the price of the other. We saw the results of that with the election of Trump: that’s what happens when you don’t understand the expanse of ideas and faces and skin colors and income brackets that comprise value systems. ART21: How do you stay up-to-date with these complicated, evolving issues? What media do you consume?

KRUGER: I think television was and is very important, and now, of course, I read online all the time: websites of newspapers like the New York Times, LA Times, The Guardian, Washington Post. I go to aggregators, but I also go to a lot of right-wing websites, and I watch Fox, of course.

ART21: Why do you go to the right-wing websites and watch Fox?

KRUGER: Because I don’t live in the liberal bubble that brought us the regime that we have now. People in that bubble were really ignorant of the forces around them and how they were gathering strength. And I knew that to be the case by reading Storm Front and InfoWars and watching Fox for years—especially now with the host Jeanine Pirro and the campaign to discredit Robert Mueller.

ART21: So it’s research, to see how they’re using media?

KRUGER: No, I observe their use of language and how easy it is to con people who want to be conned and the incredible global power of White grievance and White rage.

“If you see people’s bookmarks, you can pretty much read their autobiography. That’s interesting but also frighteningly reductivist.”

The failure of so-called progressive culture or the left is that people were closed within a bubble. And now it is promoted even more in what are called silos—in the right, the left, the middle, by our online identities, by our bookmarks, by where we go. We used to read physical newspapers and read everything—business, sports. Now, people read online and don’t read as rigorously. But you know where you go. If you see people’s bookmarks, you can pretty much read their autobiography. That’s interesting but also frighteningly reductivist. ART21: What do you see as the power and potential of art, perhaps in contrast to the conventional media?

KRUGER: I’ve always had a very broad definition of art, and it always struck me as funny that any piece of canvas with some pigment on it is called art, and some movies or forms of music are considered art and some aren’t. It’s complicated, and I don’t know the answers. But I do know that art is the creation of commentary. I think that art is the ability to textualize or visualize or musicalize one’s experience of the world—not on a diaristic, literal level but in a way that creates a commentary about what it feels to live another day.

“Art is the ability to textualize or visualize or musicalize one’s experience of the world—not on a diaristic, literal level but in a way that creates a commentary about what it feels to live another day.”

The goal for every human being, including myself, is to live an examined life—to really think about what makes us who we are in the world and how culture constructs and contains us. That’s what I’m interested in.

ART21: A large part of that construction of culture is how we depict each other. In your work, you always use found images of people; you never take your own photographs. Why?

KRUGER: Well, I was never a fan of street photography. I always thought that it was a brutal search on the streets for the most divine grotesquery or the most Other. I was always suspicious of that. A lot of photographers don’t understand the brutality of that practice. There are some photographers who picture people quite brilliantly; Catherine Opie, a colleague of mine at UCLA, is an example. But I think photojournalists are incredibly naïve, and many of them think they have halos over their heads, that they are witnessing this brutality but somehow are apart from it.

The people in my videos are actors. I pay them. ART21: One issue you’ve deeply examined is consumerism. Can you talk about the work, Untitled (I shop therefore I am)?

KRUGER: Prior to making it, I had read Walter Benjamin, and I’ll paraphrase a quote: “If the soul of the commodity existed, it would want to nestle in the home and hearth of every shopper that passed its way.” I thought that was amazing. When reading Benjamin’s Moscow Diary, I realized that he was a compulsive shopper. He’s always shopping for something, and it was about framing his image of perfection.

I remember when the works of artists in my peer group were first being discussed by critics and first being sold. I thought if my work was developing this commodity status, I had to address it in the work. 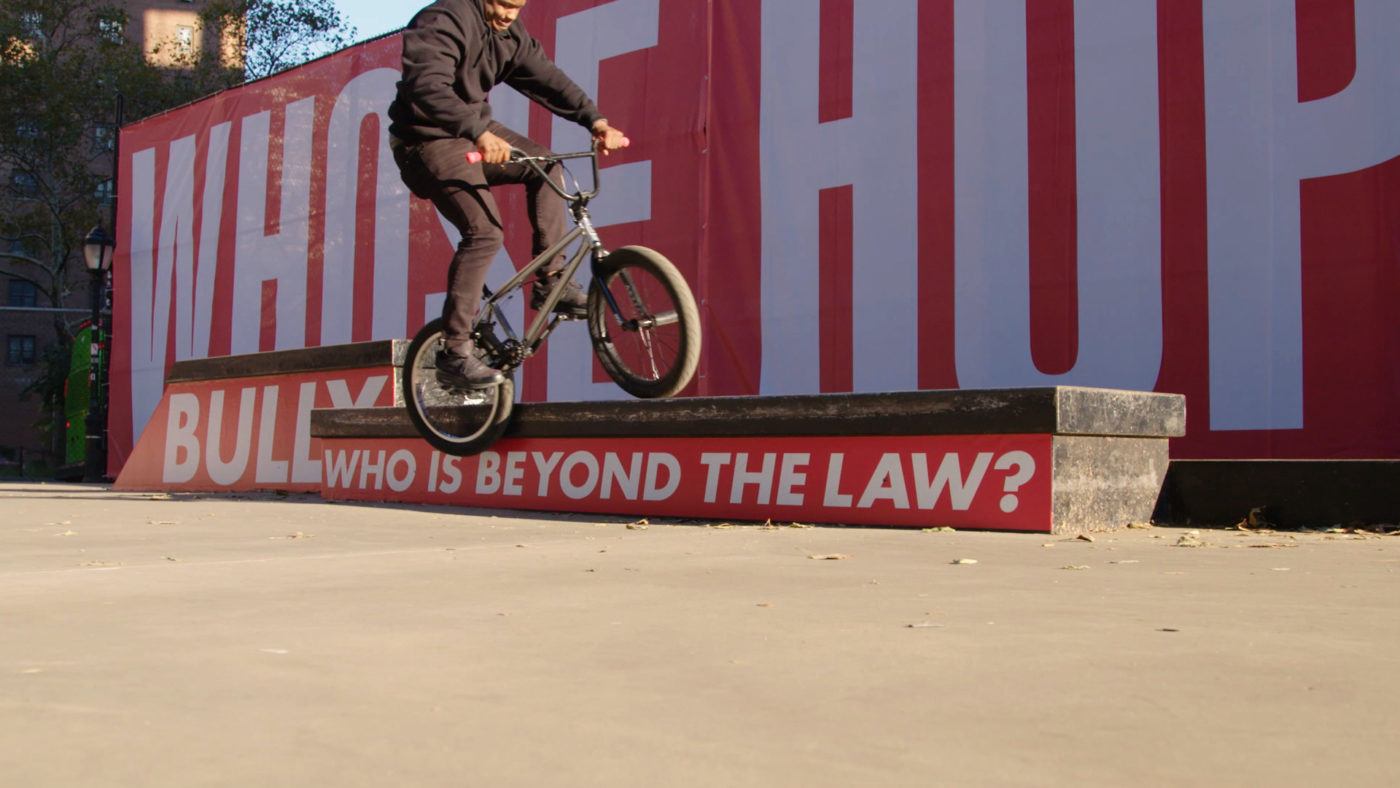 An excerpt of this interview was also published in the Art21 Magazine‘s Winter 2018 issue, “Whose Public?“