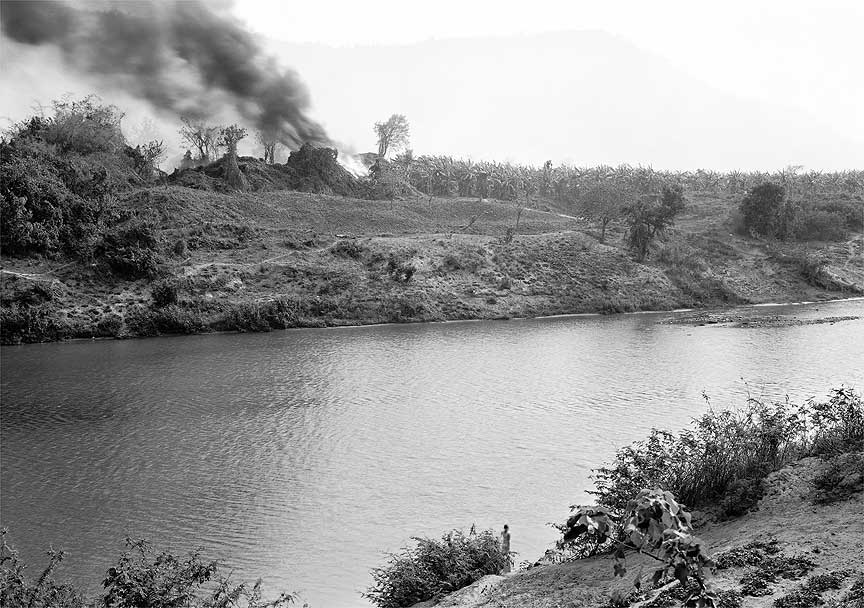 Artist An-My Lê discusses her childhood, and how her background has influenced her worldview and her work.

ART21: Do people often misinterpret your work as documentary photography?

LÊ: When you photograph the real world, you cannot escape the reality of it. But I think the magic of photography happens when you can escape the facts—the factual aspect of what’s being represented. One is always striving to suggest something beyond what is described. It’s something I’m very aware of. Someone who doesn’t know straight photography would have issues with this and, maybe, would see my work as plain documentary. It does describe certain facts. But I think the strength of it comes from what I can suggest that was not in the photograph at first—what was not in what I saw, and not in the situation itself.

ART21: Have you always approached photography in this way?

LÊ: I feel so much more confident about the kind of photography I do now. It has answered a lot of the questions and the anxiety I had as a graduate student—feeling that I wasn’t doing enough as an artist. All I did was push the button and set my frame. I really wanted to have a hand at transforming things and making things. It was very frustrating. So, I started making this stylized work where I sampled, lit, and re-photographed things that were very contrived and arty. But I think it was necessary for me to do that and then go back to making “straight” pictures and to realize how powerful they could be.

ART21: How did you end up in graduate school?

LÊ: It was all by luck and by chance. I went to Stanford University and studied biology as an undergraduate. As any responsible child of immigrants, I knew I should be doing something practical. My brothers were engineers and went to business school. I thought engineering would be too dry. So, I studied biology and applied to medical school, but I didn’t get in. I think I may have even tried twice and was waitlisted the second time. Someone suggested that I do research, try to publish some papers, get a master’s degree in biology, and then reapply. And that’s exactly what I did. I worked full-time as a research assistant in a biotech company near Stanford. My boss was very understanding and allowed me to go to school. It took me two years to finish my master’s degree, and during the last semester, I was allowed to take a non-science course. I wanted to take drawing, but it was filled up, so I took photography, and I absolutely loved it. I felt I had some sort of natural affinity for it, a natural ease. Immediately I realized it was something truly amazing, and that it could really change my life. What I loved most about it, at first, was that it allowed me to go to places, to see and discover things that I normally wouldn’t have license to. It was a pretext to learn more about the world and perhaps more about myself. ART21: Did your parents encourage this sense of exploration?

LÊ: Both my parents are professors. My father is an American Studies professor, and he was also in Education. He founded the Teachers College in Hue and was the Vice Dean of the Teachers College in Saigon. My mother was an English Literature professor. But we never really spoke English at home—they’re Francophiles. They went to university in France. I grew up in this atmosphere where there was the highest regard for education and family values; the material aspect of life was never extremely important. I think that probably made the transitions and disruptions in our life easier. Our move to the United States after the end of the war—when we came as refugees—became a lot easier because whatever was important, we could just carry with us. So, perhaps we left a house, our belongings, our toys, but we felt self-sufficient.

ART21: Part of your childhood was spent in Vietnam during the war.

LÊ: We lived in Vietnam through many of the offensives and coups. In 1968, after the Tet offensive, the Viet Cong took over part of the city for a while. My mother was distraught, and she thought she should try to get us out and live somewhere a bit more peaceful. She received a fellowship to go to France. She took us (the three children) to Paris, and our father stayed in Vietnam as a guarantor. We came back after the Paris Agreement in 1973 and stayed in Vietnam for another year and a half before the war ended. War was part of life for us. People ask, “Wasn’t it frightening?” We were really too young to know it the way an adult would. As a child, it’s just part of your life and you deal with it when it happens.

ART21: Can you talk about how your background has influenced your worldview?

LÊ: I think we’re all dealt a card in life, and I used to think that I was dealt a very difficult one. Then I came to realize that it has made my life richer, and that it has been a great foil for my work. Without really being conscious of it when doing my work, I’ve always tried to understand the meaning of war, how it has affected my life, and what it means to live through times of turbulence like that. A lot of those questions fuel my work. You approach different issues at different times of your life. When I first made the pictures in Vietnam, I was not ready to deal with the war. Being able to go back to Vietnam was a way to reconnect with a homeland, or with the idea of what a homeland is and with the idea of going home.

When you live in exile, things like smells and memories and stories from childhood all take on such importance. So, this was an opportunity to reconnect with the real thing, and to be confronted with contemporary Vietnam. It’s not the way it was twenty years ago, or the way it’s described in folktales my grandmother and mother used to tell me, or even in stories from my mother’s own childhood in the North. So, I really looked for things that suggested a certain way of life—agrarian life—things that connect you to the land. Unfortunately, pictures don’t smell; but if I could do that, they would be about smells as well. ART21: Do you see your work as part of any particular photographic tradition?

LÊ: I love nineteenth-century landscape photography. Timothy O’Sullivan, Roger Fenton, Gustave Le Gray, they’re all my heroes. I love the Civil War photographers. And more recently, Eugène Atget and Robert Adams. I love looking at their work and seeing the suggestion of history. For example, Atget photographed Paris at a time when it was changing considerably, and somehow he managed to capture that. I really respond to that. I think the work is extremely poetic and lyrical, all at the same time, being so tied to the moment. Those are qualities I really admire.

ART21: What was it like to photograph Vietnam, so many years after the war and after leaving the country?

LÊ: As soon as I got to Vietnam, I realized that I was not so interested in the specific psychology of each person. I was much more interested in their activities, and how those activities played onto the landscape. It seemed to me that that suggested a lot more about the culture and history of the country. And this was more fitting, for me, in terms of the way I worked and what I was interested in. There are some people (like Judith Ross) who can photograph one person and somehow suggest a collective history, a collective memory. But it seems that I try to do that with landscape.

ART21: Scale seems to play an important role in your photographs.

LÊ: Scale is important to me because it shows how insignificant we are. Especially with the military—no matter how advanced we are, how hard we work, it’s still about transporting all of these tanks across vast landscapes. It’s all about strategy. Suddenly a hill is much more than a hill: it’s something that you have to surmount. I’m interested in the landscape and the effort that you have to invest in it to actually get to somewhere.

ART21: How did you first decide upon the Vietnam War as subject matter for your work?

LÊ: When I became a photographer, one of the first things I learned from speaking to other artists who had more experience was that, unless you’re a conceptual artist, it’s best to draw from what you know the most. And what did I know the most? It was how much of a mess my life was, and trying to make sense of it, and the questions of war and destruction—how things are still unresolved with the Vietnam War in America. That’s something I wanted to touch, as well as the representation of war in movies and, now, the war in Iraq. I was distraught when the war started in March 2003, and I felt my heart going out to the soldiers being sent to Iraq. I wanted to explore that and to know more about how we were preparing for the war.