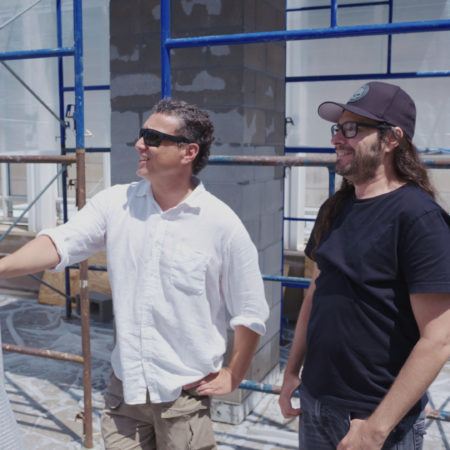 Postcommodity was founded in 2007 by Twist, Steve Yazzie, and Nathan Young and acknowledges the important contributions of its previous collaborators, including Yazzie (2007–2010), Young (2007–2015), and Raven Chacon (2009–2018). The collective focuses on centering Indigenous perspectives and working in response to the land where their projects take place. For the 2009 installation, Do You Remember When?, the artists removed a square slab of the floor from the Arizona State University Art Museum, to reveal the tribal ground upon which the institution was built. Accompanied by a recording of a Pee Posh social-dance song, the installation also highlighted the collective’s use of sound, an important facet of its work. The group’s seminal land-art installation Repellent Fence (2015) placed enormous scare-eye balloons across the U.S.-Mexico border, visually suturing together the Indigenous lands that were previously a single territory. More recently, for the work With Each Incentive (2019), Postcommodity installed intentionally unfinished columns of cinder block and steel rebar on the terrace of the Art Institute of Chicago. This intervention both offered an ode to the signature residential castillos of Central and South America and contemplated Chicago’s future landscape—architectural, social, and political—during the city’s unprecedented migration of peoples from Latin America.