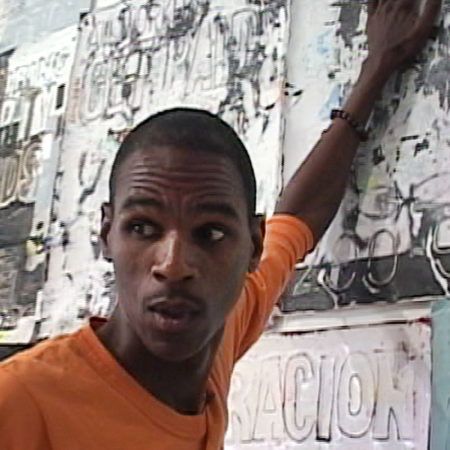 Mark Bradford was born in Los Angeles, California, in 1961. He received a BFA (1995) and MFA (1997) from the California Institute of the Arts in Valencia. Bradford transforms materials scavenged from the street into wall-size collages and installations that respond to the impromptu networks—underground economies, migrant communities, or popular appropriation of abandoned public space—that emerge within a city.

Drawing from the diverse cultural and geographic makeup of his southern Californian community, Bradford’s work is as informed by his personal background as a third-generation merchant there as it is by the tradition of abstract painting developed worldwide in the twentieth century. Bradford’s videos and map-like, multilayered paper collages refer not only to the organization of streets and buildings in downtown Los Angeles, but also to images of crowds, ranging from civil rights demonstrations of the 1960s to contemporary protests concerning immigration issues.

Mark Bradford has received many awards, including the Bucksbaum Award (2006); the Louis Comfort Tiffany Foundation Award (2003); and the Joan Mitchell Foundation Award (2002). He has been included in major exhibitions at Los Angeles County Museum of Art (2006); Whitney Museum of American Art, New York (2003); REDCAT, Los Angeles (2004); and the Studio Museum in Harlem, New York (2001). He has participated in the twenty-seventh Bienal de São Paulo (2006); the Whitney Biennial (2006); and “inSite: Art Practices in the Public Domain,” San Diego, California, and Tijuana, Mexico (2005). Bradford lives and works in Los Angeles.