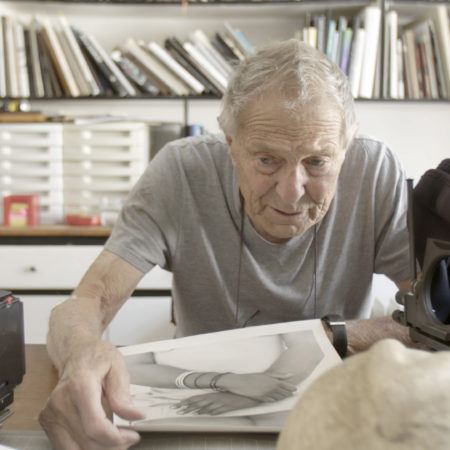 Inspired by the photography in magazines such as Life and Picture Post, Goldblatt began his career photographing the desperate lives of Black African miners during the initial years of apartheid. Raised Jewish, Goldblatt was both fascinated and fearful of the anti-Jewish and anti-Black movement by White right-wing Afrikaners. He critically probed Afrikaner privilege in his series In Boksburg, demonstrating the extraordinary contradictions and complexities of apartheid. His Structures series—which began in the 1980s—examined the ways that architecture reflected the country’s changing politics. In the 2000s, Goldblatt explored urban and rural landscapes in his work.

David Goldblatt received an honorary doctorate in fine arts at the University of Cape Town (2001). His awards and residencies include the Infinity Lifetime Achievement Award from the International Center for Photography, New York (2013); Henri Cartier-Bresson Award (2009); Lifetime Achievement Award, Arts and Culture Trust (2009); and Hasselblad Foundation International Award in Photography (2006). He has had major exhibitions at Centre Pompidou, Paris (2018); Minneapolis Institute of Art (2014); San Francisco Museum of Modern Art (2012); Barbican Centre, London (2012); Venice Biennale (2011); Jewish Museum, New York (2010); New Museum, New York (2009); documenta 12 (2007); documenta 11 (2002); and Museum of Modern Art (1998). In 1989, he founded the Market Photography Workshop in Johannesburg. Goldblatt lived and worked in Johannesburg, where he passed away in June 2018.

Dancing between Spectacular and Ordinary

Dancing between Spectacular and Ordinary

Photographer Paul Weinberg recounts his career in documenting apartheid in South Africa, as a founding member of the Afrapix collective and alongside David Goldblatt.

“The camera is a very strange instrument. It demands first of all, that you see coherently, it makes it possible for you to enter into worlds, and places, and associations, that would otherwise be very difficult to do.”