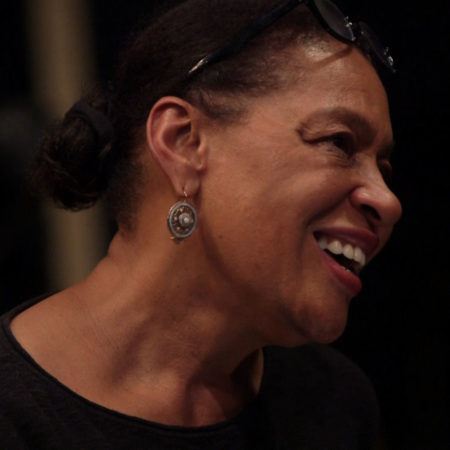 Carrie Mae Weems was born in Portland, Oregon, in 1953. Weems earned a BFA from the California Institute of the Arts, Valencia (1981), and an MFA from the University of California, San Diego (1984), continuing her studies in the Graduate Program in Folklore at the University of California, Berkeley (1984–87). With the pitch and timbre of an accomplished storyteller, Weems uses colloquial forms—jokes, songs, rebukes—in photographic series that scrutinize subjectivity and expose pernicious stereotypes.

She has received honorary degrees from Colgate University (2007) and California College of the Arts (2001). Awards include the MacArthur Fellowship (2013); Anonymous Was a Woman Award (2007); Skowhegan Medal for Photography (2007); Rome Prize Fellowship (2006); and the Pollack-Krasner Foundation Grant in Photography (2002); among others. Weems’s work has appeared in major exhibitions at Savannah College of Art and Design (2008); W. E. B. Du Bois Institute for African and African American Research, Harvard University (2007); Williams College Museum of Art, Williamstown (2000); and Whitney Museum of American Art, New York (1998); among others. Carrie Mae Weems lives and works in Syracuse, New York.

Conversation Starter: When can family cause a spark?

When can family cause a spark?

Whether it be the family that raised them or they created later on, family matters seep into artwork.

Speaking with Art21 founder Susan Sollins in New York City in August 2008, Carrie Mae Weems meditates on the photographers who influenced her work and how she constructs an image.

Educator-in-Residence Jeannine Bardo introduces lessons from her third-grade unit on “Home,” in which students’ research is centered on facets of their community: themselves, their family, and their friends.

Below the Surface: Creating Hope through Portraiture

Below the Surface: Creating Hope through Portraiture

Educator-in-Residence Joseph Iacona’s students embark on a project of self-discovery, inspiring them to feel hopeful about themselves and their future while protecting their identities.

Art21 Educator Dennis Greenwell shares how a project on empathy helped his students better understand one another and our current political landscape.

On the eve of the unveiling of the artist’s 2008 project, Constructing History: A Requiem to Mark the Moment, at the Savannah College of Art and Design in Atlanta, Carrie Mae Weems discusses her background in dance, the role of other women’s bodies in her work, and the ongoing performative thread in her photographs and films.