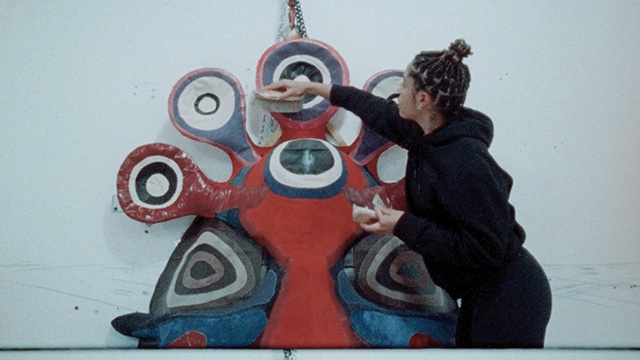 New York, New York – Art21 is proud to announce the premiere of a new film featuring artist Tau Lewis on Wednesday, February 1, at 12:00 PM ET. The first 2023 release of Art21’s digital film series, New York Close Up, the film offers a look into the work and creative process of the New York City-based artist.

“It’s really easy to lose yourself within the making part of things,” says artist Tau Lewis. Working with found fabrics in the quiet of her Brooklyn studio, Lewis and her team bring an uncommon attentiveness, care, and intention to the creation of her large-scale, figurative sculptures. Shot on 16-millimeter film, this documentary short evocatively captures the making of a suite of monumental sculptures that seem to radiate their own personalities and desires.

“It was such a privilege to witness Tau’s creative process, including the collaboration in her studio, which felt like a chamber orchestra,” says Crystal Kayiza, Director of the film. “Tau’s work offers a portal to explore spiritual realms and past lives and my hope is that this film offers a window into Tau’s silent conversation with the material.”

Tune in to the premiere of Art21’s newest release featuring Tau Lewis on Wednesday, February 1, 2023, at 12PM ET at Art21.org and on Art21’s YouTube channel at www.youtube.com/art21org. To learn more, email Art21 Manager of Communications, Hannah DeGarmo, at [email protected].

About New York Close Up

New York Close Up is supported by the New York State Council on the Arts with the support of the Office of the Governor and the New York State Legislature; The Andy Warhol Foundation for the Arts; and, in part, by public funds from the New York City Department of Cultural Affairs in partnership with the City Council; and by individual contributors.

Art21 is the world’s leading source to learn directly from the artists of our time. A nonprofit organization, the mission of Art21 is to educate and expand access to contemporary art, producing documentary films, resources, and public programs. Learn more at Art21.org.