How do bodies, commodities, and the digital intersect? A few years ago, if someone had mentioned that social media had anything to do with my work, I would’ve been horrified. Because honestly it can be a pretty miserable place. I don’t think it’s an obvious connection that a lot of people make. I use social media in the way that a lot of artists do: to promote my work. However, within that, there are other complexities. I’m branding myself, which is also something that I’m deeply interested in. What ways have I been altered or manipulated by digital metrics that quantify my market performance on a daily basis?

There’s a professional side of my social media use that correlates with my work and then there’s the research side. I am careful to even call it research, because when I’m scrolling on social media, it’s mind numbing, fast paced and reactionary. I noticed that I was getting all of these ads—as an aging woman—for skincare, so I started saving them. Now my collection on Instagram is filled with sea green, rose gold and pastel colored products: creams, serums, contraptions, wearables, masks, collagen pads, facial massagers, massage diagrams for your face—kind of everything. All of these images and objects are at the crux of a lot of my work.

Years ago an established artist I respect and look up to asked me, “Is your work part of the problem or is it part of the solution?” when talking about feminism and sexism. It’s a question that’s really perplexing to me. I’ve picked that question up again recently because that is probably unanswerable for me in my work, and I think that’s what I’m most curious about.

In a world where one’s youthful face can be connected to one’s capital, at an exclusively high price point, there’s also a current honesty about the methods or procedures one partakes in order to enhance one’s appearance. It’s sort of a humorous cheerleading towards a physical self-actualization. At the same time, there’s social shaming that is a simultaneous undercurrent. I hear it all the time like, “She’s had work done. Oh god, too much Botox. Have you seen what she looked like before? I would never do that, would you?”

I’m in all of that as a woman reduced to my parts and I’m disgusted and saddened by it, but I’m also seduced by it. Part of me wants to participate. Sometimes, I do participate, I buy and apply the serums, I try face yoga. All of these things, they’re so sexy. Face creams, masks, those gelatinous pads for your face, they’re beautiful objects and slippery materials. I’m interested in these products from a formal standpoint and how the materiality of something that’s rather anti-feminist feels so good to me, wrapped in a “self-care” consumer package.

Let’s talk about slime. Going through TikTok and having slime appear in my feed so often, I found these really bizarre videos called ”Satisfying Slime Story Time.” They usually are accompanied by a feminine voice—a kind of super sped-up, chipmunk-like audio—telling a story. The stories are strange, almost like Mad Libs. They’re dark, they’re super dramatic, and all of it is told over slime ASMR footage. So, for one of my recent videos, I used this format.

With slime, you can’t define what it is. It’s not a liquid or a solid. It parallels craft because it can be made at home; it’s made of household materials and often tricky to categorize. A lot of the slime videos right now have this element where the hands doing the work will pour eyeshadow into the slime and then take a cookie cutter and stamp out shapes in the slime, and then they’ll fold the whole thing up and you’ll see the metallic eyeshadow mix with the colors of the slime, creating a shimmery synthetic beauty goo. There’s this magician’s performance about it that I love, a physical one, bringing makeup and household items into it.

It feels like a balm and I feel that crafting can be a balm — a resistant, restorative, and rebellious balm for dealing with the deep sadness of what it is to be alive, especially what it can mean to be alive as a woman. Slime or a balm you make at home out of household materials, something so simple can elicit joy that is outside of consumerism.

With textiles, they’re like my sneaky shadow that’s been there forever. I remember going to department stores as a kid and just sticking my face into a rack of silky negligees. In school, though I was taught to work with the “hard” sculpture materials. I was given a sewing machine 20 years ago (I still have it) but it sat dormant for a decade. I couldn’t see that my obsession with fabric was anything worth exploring in my practice but about six years ago fabric, pattern construction, and sewing reentered my work and it felt powerful being there.

When I was in grad school, I remember having made something in pink that ultimately related to fertility, and in a critique, someone said, “I just wish it wasn’t pink. It’s so obvious.” This comment affected me for a long time afterward. There are these things that are said in the art world, like, “Don’t do that. So cliche. That’s already been talked about.” It’s like, “Sure, yeah.” But I don’t know? Maybe we haven’t talked about it enough. I think as I’ve gotten older, I’ve just settled into the work and if I want to make something in pink, I will.

I made this sculpture last fall with these giant Birkin bags. There’s so much tied to them as symbols of inflation, success and extravagance. A lot of people strive to own one (or 50,) and a lot of people don’t want anything to do with them even if they could afford one. Sometimes, it’s almost embarrassing for me to say, “These (my sculptures) are modeled after a Birkin bag.” But like a lot of things that are sticky, I was compelled to research this iconic bag.

The Birkin was originally a baby bag, designed to carry diapers and baby bottles! Knowing that their initial purpose was tied to the labor of taking care of a baby and now looking at them as these commodity objects with inflated prices and speculative value felt not dissimilar to the art market.

I think I respond to bags and to this idea of the carrier bag theory—[that the history of humanity is defined by containers, not by weapons]—so deeply because I’ve always been curious about early human folklore and gender roles within premodern societies. Reading about that idea gave me a lot of validation to keep exploring things that felt trivial, like bags. I love how Ursula K. Le Guin [who wrote about the carrier bag theory] talks about the bag as a home, as a container that we put stuff in. There’s something so feminine about that: it connects me to feelings from childhood and being really proud of the things that I found, held and collected. 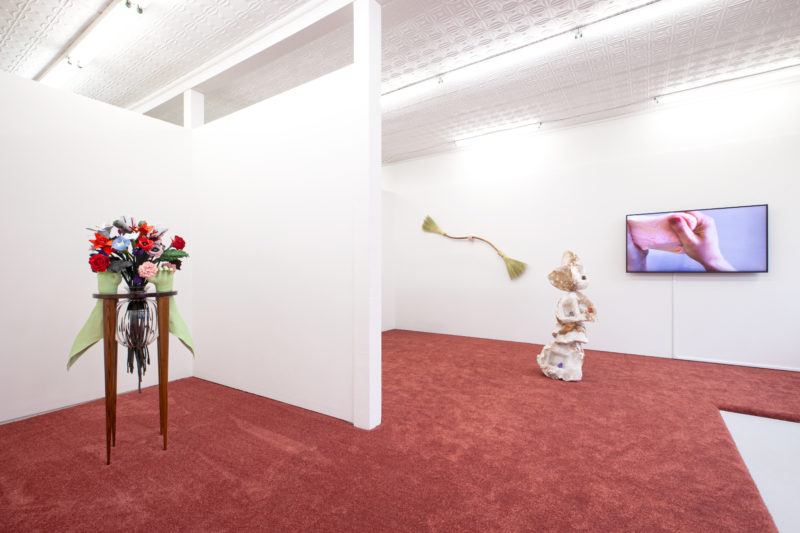 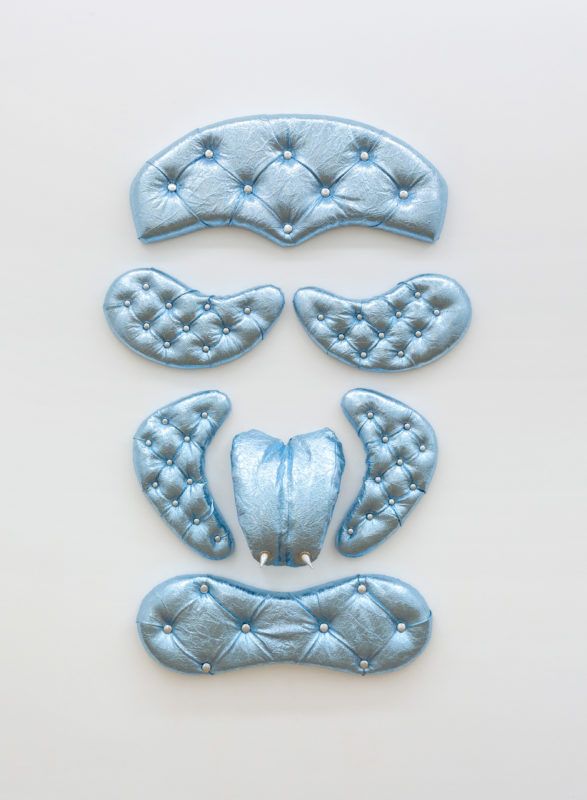 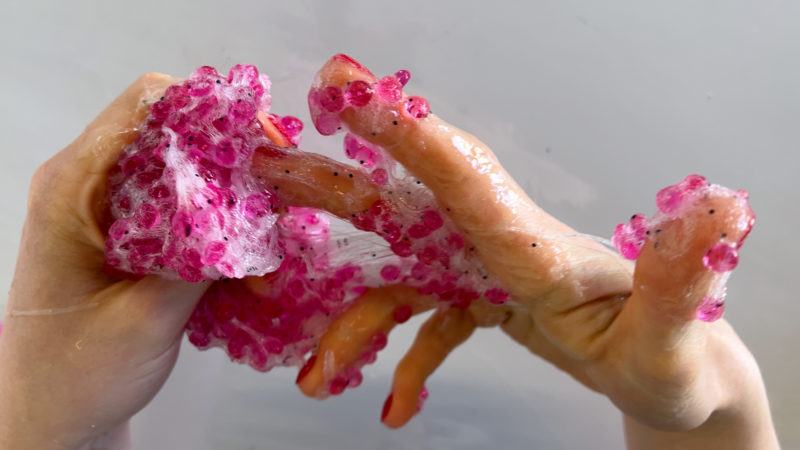 Interview conducted for Art21 in March of 2022 by David Eardley. Original photography for Art21 by Elliott Jerome Brown Jr.. All other photography courtesy the artist, Mrs. Maspeth, NY.

David Eardley is a creative director, writer, and curator working in New York and Mexico City. He is the founder of Pink Essay, a creative studio and platform re-designing design culture through exhibitions, experiences, and archives. David’s curatorial work includes the OPEN STUDIO, Physical Education: Parallax 101, and Physical Education II: Design for All design exhibitions with Pink Essay, as well as his independently curated Home Around You and Unidades Materiales art and design exhibitions. David’s work and writing have been featured across The Wall Street Journal, Architectural Digest’s Clever, Office Magazine, Cloakroom Magazine, New York Magazine’s The Strategist, CURBED, and I-D.

More Big Questions
How Can An Artist Be A Catalyst For Change? Jade Guanaro Kuriki-Olivo (Puppies Puppies) models ways to create equity through art.
What Does it Mean to be a Visitor? Sky Hopinka questions how to share our experiences without explaining them.
How Can Context Transfigure Culture? Iman Raad defines becoming an ambivalent non-ambassador to his culture
Searching Art21…
Back