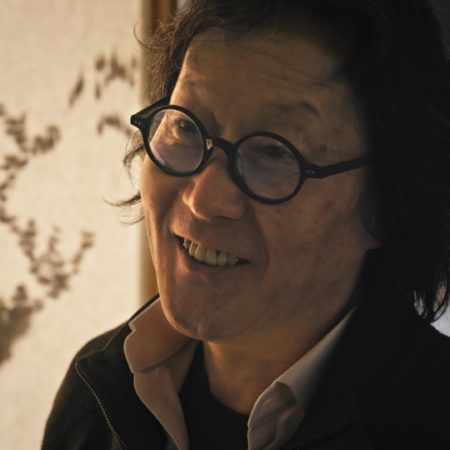 Xu Bing was born in 1955 in Chongqing, China, and grew up in Beijing. Fascinated with visual and written languages, Xu builds mixed-media installations that simultaneously evoke and subvert centuries-old Chinese cultural traditions, such as calligraphy, wood-block printing, and landscape painting scrolls. The artist asks viewers to consider how our cultural backgrounds, especially those shaped by language, fundamentally color our worldviews.

Near the end of the Cultural Revolution in the 1970s, Xu was sent to work in the countryside for two years as part of Mao Zedong’s “re-education” policy; he later returned to Beijing to study printmaking and drawing. His installation Book from the Sky (1987–1991), in which he hard-carved and altered more than four thousand Chinese-character printing blocks in order to render nonsensical texts on sprawling, epic-scale scrolls, gained him international attention. Due to increasing artistic restrictions following the 1989 Tiananmen Square protests, Xu moved to New York City, where he lived for almost two decades. Playing with systems of language and disrupting viewers’ expectations and perceptions has remained a throughline in Xu’s works: in Square Word Calligraphy (1994–ongoing), the artist reconfigures English words to resemble Chinese characters, and in Background Story (2004–ongoing), he uses twigs, old newspapers, and plastic wrap to imitate Song Dynasty landscape paintings. Created with materials as varied as tobacco, construction debris, and surveillance-camera footage, Xu Bing’s installations remain elegant and poignant, at once revering and questioning cultural traditions and challenging viewers’ preconceived assumptions.