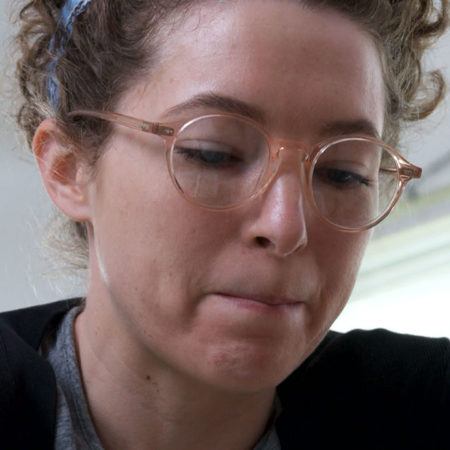 Mary Reid Kelley was born in Greenville, South Carolina in 1979. In videos and drawings filled with punning wordplay, Reid Kelley presents her take on the clash between utopian ideologies and the realities of women’s lives in the struggle for liberation and through political strife, wars, and other historical events. Performing scripted narratives in rhyming verse, the artist—with her husband Patrick Kelley and various family members—explores historical periods through fictitious characters such as nurses, soldiers, prostitutes, and saltimbanques. Adopting a stark black-and-white palette while synthesizing art-historical styles such as Cubism and German Expressionism, Reid Kelley playfully jumbles historical periods such as World War I and France’s Second Empire to trace the ways in which present concerns are rooted in the past.

Mary Reid Kelley earned a BA from St. Olaf College (2001) and an MFA from Yale University (2009). She has received awards from the American Academy in Rome (2011); the Rema Hort Mann Foundation (2009); and the College Art Association (2008). Major exhibitions include Salt Lake Art Center (2011); SITE Santa Fe (2010); Institute of Contemporary Art, Philadelphia (2010); ZKM Museum of Contemporary Art, Karlsruhe, Germany (2010); and the Rochester Art Center (2007). Her work is in the public collections of the Goetz Collection, Munich; Yale University Art Gallery; and the University of Michigan Museum of Art, Ann Arbor. Mary Reid Kelley lives and works in Saratoga Springs, New York.