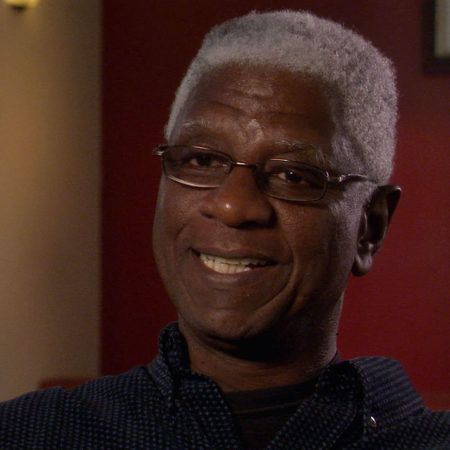 El Anatsui was born in Anyanko, Ghana in 1944. Many of Anatsui’s sculptures are mutable in form, conceived to be so free and flexible that they can be shaped in any way and altered in appearance for each installation. Working with wood, clay, metal, and—most recently—the discarded metal caps of liquor bottles, Anatsui breaks with sculpture’s traditional adherence to forms of fixed shape while visually referencing the history of abstraction in African and European art.

The colorful and densely patterned fields of the works assembled from discarded liquor-bottle caps also trace a broader story of colonial and postcolonial economic and cultural exchange in Africa, told in the history of cast-off materials. The sculptures in wood and ceramics introduce ideas about the function of objects (their destruction, transformation, and regeneration) in everyday life, and the role of language in deciphering visual symbols.

El Anatsui received a BA from the College of Art, University of Science and Technology, Kumasi, Ghana (1969) and since 1975 has taught at the University of Nigeria, Nsukka. His works are in the public collections of the Metropolitan Museum of Art, New York; Museum of Modern Art, New York; Los Angeles County Museum of Art; Indianapolis Museum of Art; British Museum, London; and Centre Pompidou, Paris, among many others. Major exhibitions of his work have appeared at the Sterling and Francine Clark Art Institute, Williamstown (2011); Royal Ontario Museum, Toronto (2010); National Museum of Ethnology, Osaka (2010); Rice University Art Gallery, Houston (2010); Venice Biennale (2007); and the Biennale of African Art, Senegal (2006). El Anatsui lives and works in Nsukka, Nigeria.