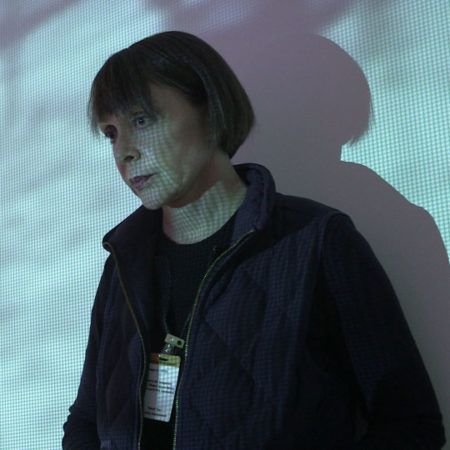 Diana Thater was born in San Francisco in 1962. She makes video installations that poetically grapple with threats to the natural world, from the extinction of species to long-lasting environmental disasters such as the nuclear fallout of Chernobyl. Many of the artist’s works take the space where people and animals meet as their subject, exploring the experiences of wild gorillas in a Cameroon park, a wolf trained to work in Hollywood films, a monkey-inhabited temple in India, zebras at an exotic animal farm, dolphins in the Caribbean, and trained horses at Medieval Times Dinner and Tournament.

Thater also provides a window onto animal subjectivity through her use of atypical camera angles, dramatic shifts in scale, and colored lights that alter the spectrum of her exhibitions. Adopting cyclical time signatures and extended durations, Thater’s ambient works are abstractions of time which diverge from the linear narratives humans use to make sense of themselves and the cosmos. Whether using floor-to-ceiling video projections, stacks of television monitors, or screens placed flat on the ground, Thater’s installations are site-dependent and subtly change from venue to venue.