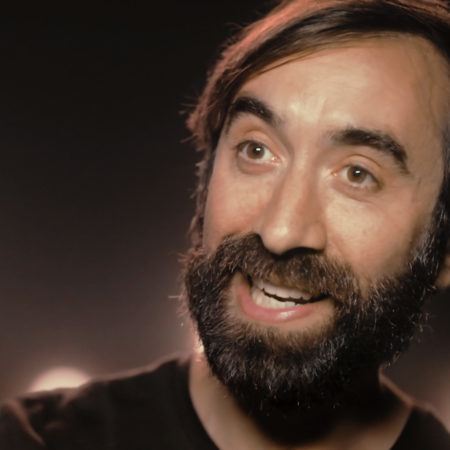 Bryan Zanisnik was born in 1979 in Union, New Jersey and currently lives and works between New York and Stockholm, Sweden. Dealing with both autobiographical and social subject matter, Zanisnik creates videos, performances, installations, and photographs, often with elements of the absurd and the abject as he investigates the dynamic between performer and audience.

During graduate school, Zanisnik realized that the home videos he made as an adolescent—casting his family in Stanley Kubrick- and Martin Scorsese-inspired dramas—were an important part of his beginning as an artist. He later re-cut these home videos and incorporated them in his work.

His projects have included staging a boxing match with his childhood bully, exploring and documenting New Jersey’s Meadowlands, and creating The Philip Roth Presidential Library from hundreds of second-hand copies of books by and about the author. Having created more than thirty performances in collaboration with his parents, Zanisnik, in the New York Close Up film “Bryan Zanisnik & Eric Winkler’s Animated Conversation,” discusses his life and practice following the loss of his mother in 2015.

Conversation Starter: When can family cause a spark?

When can family cause a spark?

Whether it be the family that raised them or they created later on, family matters seep into artwork.

Educator-in-Residence Jeannine Bardo introduces lessons from her third-grade unit on “Home,” in which students’ research is centered on facets of their community: themselves, their family, and their friends.

Finding Community: Art21 Educators and Contemporary Art in the Classroom

Finding Community: Art21 Educators and Contemporary Art in the Classroom

Art21 Educator Jeannine Bardo shares how using Art21 films and resources in the classroom has expanded her teaching practice.

“Maybe there’s also, with age, a little more confidence to make something that I really love making, and then maybe not worry so much about the reception of it.”