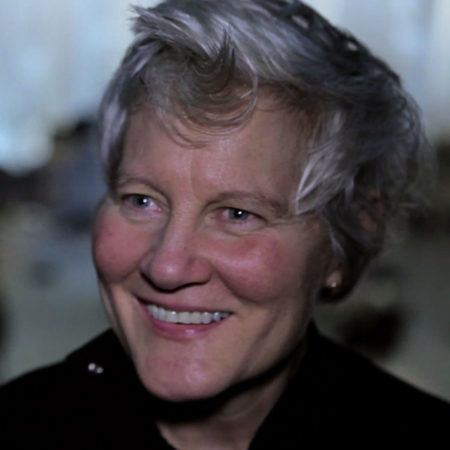 Ann Hamilton was born in 1956 in Lima, Ohio. She trained in textile design at the University of Kansas, and later received an MFA from Yale University. While her degree is in sculpture, textiles and fabric have continued to be an important part of her work, which includes installations, photographs, videos, performances, and objects. For example, following graduation she made Toothpick Suit—for which she layered thousands of toothpicks in porcupine fashion along a suit of clothes—that she then wore and photographed.

Hamilton’s sensual installations often combine evocative soundtracks with cloth, filmed footage, organic material, and objects such as tables. She is as interested in verbal and written language as she is in the visual, and sees the two as related and interchangeable. In recent work, she has experimented with exchanging one sense organ for another: the mouth and fingers, for example, become like an eye, with the addition of miniature pinhole cameras.

In 1993, she won a prestigious MacArthur Fellowship. As the 1999 American representative at the Venice Biennale, she addressed topics of slavery and oppression in American society, with an installation that used walls embossed with Braille, which caught a dazzling red powder as it slid down from above, literally making language visible. After teaching at the University of California at Santa Barbara from 1985 to 1991, Hamilton returned to Ohio, where she lives and works.

Artist Ann Hamilton discusses notions of perimeter and center in relation to the work she’s done with pinhole cameras.