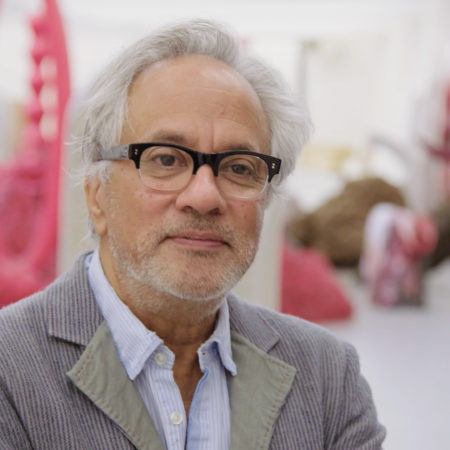 Anish Kapoor was born in 1954 in Mumbai, India. World renowned for his perception-defying sculptures and large-scale public installations, Kapoor works with industrial materials like mirror, steel, stone, and vinyl to create forms that evoke the metaphysical and challenge viewers’ ideas about physical space. Kapoor’s sublime use of concave forms, reflective surfaces, intense colors, and monumental scale invites viewers to experience both collective awe and private contemplation.

Kapoor moved from India to London in the early 1970s to study art. His early works utilized vibrant powdered pigment, sculpted into perfect geometric forms. In the mid-1990s, Kapoor began working with materials like fiberglass, stainless steel, and PVC. Hallmarks of his practice are monochromatic palettes —intense hues of black, red, and blue—with which Kapoor creates mysterious negative spaces, or voids, within his sculptures. He is best known for his enigmatic large-scale works and public installations, such as the famous Cloud Gate, fondly referred to as “The Bean,” in Chicago’s Millennium Park. Cloud Gate, like many of Kapoor’s works, utilizes reflective surfaces and captivates viewers with its awe-inspiring scale and deceptive beauty. More recently, Kapoor has created works made of blood-red wax and mechanical systems that catapult the material across galleries’ floors and walls. Inviting closer examination, these provocative feats of engineering push viewers to contemplate intersections of concepts: the biomorphic and geometric, the form and the void, the human body and the spirit.